If Ukraine foiled a plan to kill Russian Kremlin critic Arkady Babchenko, why the indignation? 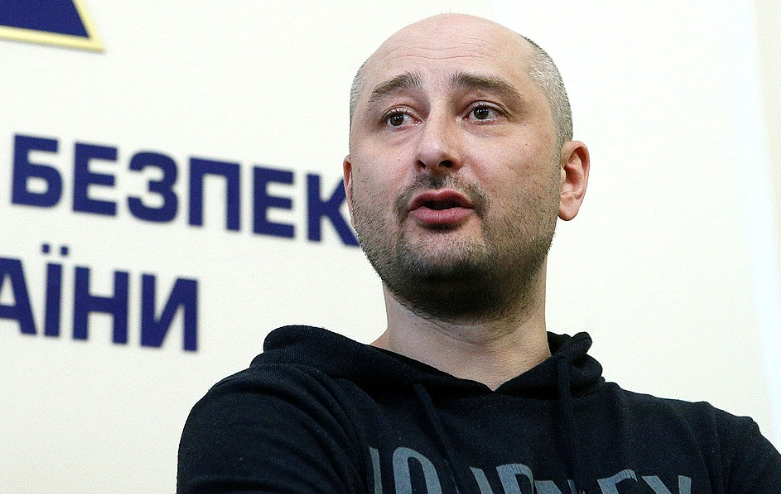 The news on 30 May that Arkady Babchenko had not been killed was greeted with incredulous joy and then a wide range of reactions, some apparently lacking in any logic.  How do you find those who commissioned a killing if you don’t give the suspected go-between a chance to lead you to them?  This was clearly one of the objectives of Ukraine’s Security Service [SBU], with Babchenko in on the operation.  Whether it achieved all its aims is as yet unclear, but is it really warranted to call this “manipulation by the SBU for their information war”, as has Christophe Deloire from Reporter without Borders?

It was reported in the evening of 29 May that the Russian journalist and critic of the current Russian regime had been shot dead in what looked like a contract killing.  The news spread swiftly, with Ukrainians, and the western media, all seeing the apparent assassination as the latest in a long list of violent deaths of critics of  Russian President Vladimir Putin and his regime.  The reports from Russia were, predictably, very different.  The Russian Foreign Ministry claimed that “bloody crimes and total impunity have become routine for the Kyiv regime” and Russian state-controlled media went into overdrive, manipulating information as to why Babchenko had left Russia and trying to shift the focus onto the supposed danger of being a journalist in Ukraine.

During the day on 30 May, there were statements slamming the Ukrainian authorities in connection with the killing from Ukrainian politicians and from Amnesty International Ukraine who spoke of the Ukrainian authorities’ “inability to counter violence against journalists”.  There were also demands from many other international media watchdogs and foreign governments that Ukraine properly investigate the killing and bring those responsible to justice.

Then, at a press briefing by the SBU, Arkady Babchenko walked in and it was revealed that this had all been a sting operation to find those who ordered a plan to assassinate Babchenko.

SBU Head Vasyl Hrytsak said that they had information that the killing had been commissioned by the Russian security service, though did not provide any details. He asserted that this was part of an operation by Russia’s security service to eliminate Russian nationals forced to leave Russia and living in Ukraine or EU countries who were providing an objective picture of what is happening in Russia.

The SBU had established that Russia’s FSB had recruited a Ukrainian citizen to hire paid killers.  The latter had allegedly proposed such ‘work’ to a number of veterans of the war in Donbas with 30 thousand USD offered as payment.  It seems one of the men he approached reported it to the SBU.

The Ukrainian go-between, identified only as H, was, the SBU said, planning to leave Ukraine after the killing had been carried out and had a ticket to a third country from where he planned to go to Russia.

The SBU Head said that H. had also been sent a dossier on Babchenko, which they would be making public.

The Russian FSB had also commissioned H. to purchase 30 Kalashnikov rifles, explosives, ammunitions, etc. which the SBU had, he said, documented in the course of special operations.

H. had been detained at around 15.00 on Wednesday afternoon, shortly before the press briefing, and searches and other investigative activities were now underway, Hrytsak said.

Ukraine’s SBU has not always dazzled, and had it not been for Babchenko’s full cooperation in this operation, scepticism about the claims made would have been high.

Babchenko spoke at the briefing, explaining that he had been informed of the plan to kill him around a month earlier.  He was clearly convinced that the information provided to H. had to have come from Russia, and from the authorities there.  He mentioned that the photo provided had been from a passport which could not have been obtained except via the Russian passport office. Babchenko thanked the SBU and apologized for the distress caused saying he had himself experienced it, burying “friends and colleagues” many times.  There had been no other choice, he said.

Babchenko and his family will have police protection for now, though it is unclear how indefinitely this can continue.

As mentioned, the reaction has been very mixed, with a lot of very strong criticism of the SBU.

The very reports are somewhat misleading.  The BBC’s title, for example, was: “Arkady Babchenko: Ukraine staged fake murder of journalist”.

Yet, is this correct?  According to the SBU, with Babchenko himself clearly convinced,  the murder was in the end staged, however there were very real plans to kill him, with these, Babchenko and the Ukrainian enforcement bodies say, having been foiled.

It is notoriously difficult to find those who commission contract killings, and surely any efforts to uncover the culprits can be seen as justified.

Whether that required such delay in revealing that Babchenko was alive is difficult to know until more information is revealed about the operation and the SBU’s findings.

Both Melinda Haring at the Atlantic Council and the BBC have reported some angry reactions to the SBU’s operation.  Some of the doubts are certainly  very understandable.  What happens next time the SBU reports a high-profile murder?  Are there not enough lies being emitted from Russia, without adding another story that is then proven to be unreal?

Some went far further in their comments, such as Christophe Deloise from Reporters without Borders who called it a ‘pathetic stunt’ and asserted that this “manipulation … would not help the cause of press freedom”.

The long trail of unsolved murders of journalists in Russia and of Belarusian journalist Pavel Sheremet in Ukraine do nothing for the cause of press freedom either, and it is extremely hard to do more than catch a paid killer who has no idea who the people who ordered the killing are.  This has made it so easy for critical journalists and politicians to be murdered in Russia, and it was very widely assumed that the apparent killing of Babchenko would prove to be yet another such case.

There was recognition of the difficulties of the situation in a comment from Salil Tripathi, the Chair of PEN International’s Writers in Prison Committee:

“In a world where lies are called alternate facts, and where information is manipulated to distort reality, it takes peculiar courage to play the game and trick the malevolent forces, to stress the grim fact: that journalists’ and writers’ lives are at grave danger. That Arkady Babchenko is alive is a matter of relief and a cause to celebrate; that he had to fake his death to expose those who threaten his life - and the lives of many others - remains a cause of enormous concern. We remember the unsolved murders of Anna Politkovskaya and Pavel Sheremet. This culture of impunity must end; journalists and writers must be able to operate freely, without fear. Authorities in Russia and Ukraine must take immediate steps to investigate the charges made and reassure journalists and writers of their safety.”

There are opposing arguments as to the SBU’s operation on 29-30 May, however it is surely relevant that Arkady Babchenko is convinced that the measures were aimed specifically at ensuring his safety and that they had indeed saved his life..