Russian prosecutor demands 14-year sentence for Ukrainian journalistLawyer defending Ukrainian journalist accused by Russia of ‘spying’ stripped of his statusUkrainian journalist imprisoned in Russia awarded Sakharov Prize for CourageValentin Vyhivsky: Eight years of torture in Russian captivity for being Ukrainian Ukrainian political prisoner’s drawings from Russian captivity go on display in Berlin Russia called a disused aerodrome a state secret to sentence Ukrainian to 12 years Russia’s unrelenting torture of Ukrainian Maidan activist Valentin Vyhivsky Valentin Vyhivsky: "Either they free me, or I’ll return to my Homeland “by heavenly express”Ukrainian jailed in Russia’s revenge for Maidan punished because of back pain Abducted, tortured and spending seventh Christmas in Russian solitary confinement Kremlin hostage: From mock executions to torture through solitary confinementRussia secretly imprisons Ukrainian footballer for 9 months, then charges him with ‘spying’ for UkraineSushchenko & Aseyev: You helped get us released, now help imprisoned Crimean civic journalists#StayHome and Help Russia’s Ukrainian Political Prisoners held in dangerously unsanitary conditionsUkrainian political prisoner Vyhivsky imprisoned longer in Russia than his grandfather was under StalinPensioner jailed for 12 years in Russia on charges of telling Ukraine about military activities near the borderRussia’s ‘persuasion’ of Ukrainian hostage: Mock executions, torture & five years of solitary confinementNo ‘normalization’ while Russia is still holding at least 87 Crimean Tatar and other Ukrainian political prisonersRussia defends its ‘historic right’ to abduct Ukrainian political prisonersRussia has been taking Ukrainians hostage since 2014. Now they’ve seized an American
• Topics / Freedom of expression
• Topics / News from the CIS countries 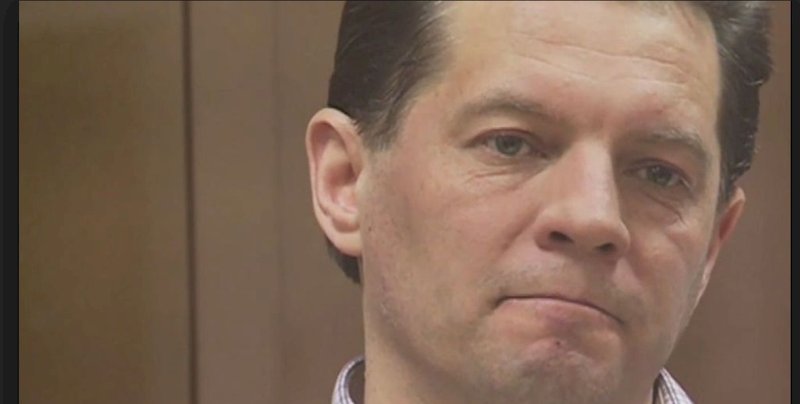 The Moscow City Court has found Ukrainian journalist Roman Sushchenko guilty of mystery ‘spying’ and sentenced him to twelve years in a maximum security prison.  This is just over ten years longer than the sentence passed in December 2016 on Russian police officer Andrei Artemyev  for shooting a police informer dead in his office, and more than some sentences for murder with aggravating circumstances.

There was strict secrecy over the Sushchenko case, and only the actual sentence was read out by ‘judge’ Oleg Muzychenko after a ‘trial’ held behind closed doors.  However, since the minimum sentence for espionage is ten years,  Russian law expert Mikhail Savva believes that a 12-year sentence in today’s Russia suggests that there was no real proof of spying.  All three other Ukrainians sentenced since 2014 on secret ‘spying’ charges have received this sentence or even lower.

There are no acquittals in such FSB ‘spying’ cases, and a guilty verdict against Sushchenko, as in the previous cases, had been viewed as inevitable. The main difference from other highly questionable FSB ‘Ukrainian spying cases’ was Sushchenko’s profession, and the publicity that gave his arrest and imprisonment

Sushchenko was seized by FSB officers on September 30, 2016, while in Moscow visiting close relatives.  There was typical secrecy about the arrest, with his family only learning what had happened after a human rights activist came upon the Ukrainian in Lefortovo Prison.

On Oct 3, the FSB claimed that the Ukrainian journalist, who had been working as Paris Ukrinform correspondent for the past 6 years was a colonel in Ukraine’s Military Intelligence, who had been gathering secret information about the activities of the Russian army and forces of the National Guard.  The FSB asserted that the information, if leaked abroad, could have caused damage to the state’s defence capacity.

This is likely to have been the line that the FSB and prosecution took in court, however the entire ‘trial’ was secret, and Mark Feygin, who was representing Sushchenko was forced to sign an undertaking not to divulge any information.

On the same day that the FSB asserted that Sushchenko was an undercover colonel, the Russian Foreign Ministry claimed that Sushchenko had had no right to engage in journalist activities since he didn’t have accreditation.

This was an interesting admission since, from the little that Feygin has been able to reveal about the case, the activities in question appear to have been linked to Sushchenko’s work as a journalist.

It is likely that he was ‘set up’, by being asked to take a disk back to Paris for another journalist.  Most disturbingly, Sushchenko had agreed to take the disk for a person he has known for 28 years.  Since he was arrested while receiving the disk, the person was almost certainly involved.  Judging by the little that Feygin was able to reveal, it seems that the information in question pertained “to an anticipated invasion of Ukraine by Russia in the summer or autumn of 2016”.

Professor Savva believes it likely that the only ‘evidence’ against Sushchenko is the testimony of the ‘witness’ involved in setting the journalist up, with this viewed by the ‘court’ as sufficient.

This is the third FSB ‘spying’ case where Ukrainians have been held in Lefortovo Prison.  Valentyn Vyhivsky was held in total isolation and tortured into ‘confessing’ to the charges, while 72-year-old Yuri Soloshenko was prevented from seeing the rights lawyer who had taken on the case, placed under massive pressure and tricked into agreeing to plead guilty.

Fortunately, Sushchenko profession and his colleagues guaranteed the case greater prominence. He has had proper legal representation throughout, and the Ukrainian consul has been able to visit him.

The 49-year-old journalist denies the charges, and his lawyer has confirmed that they will be lodging an appeal. The OSCE Representative on Freedom of the Media, Harlem Désir has already reiterated earlier calls for Sushchenko’s release, and protests from other European structures, democratic countries and media and human rights NGOs are sure to follow.  On 10 December 2017 (International Human Rights Day), the Andrei Sakharov Committee on Journalist as an Act of Conscience announced that it was awarding Sushchenko their prize ‘For Courage’.

Sushchenko has not once seen his 11-year-old son Maxim since his arrest, and has only been allowed a very small number of visits from his wife Angela and adult daughter Julia (also a journalist).  The visits have been short, with Sushchenko held behind a glass wall and a guard present throughout.   Russia clearly has a lot to hide.