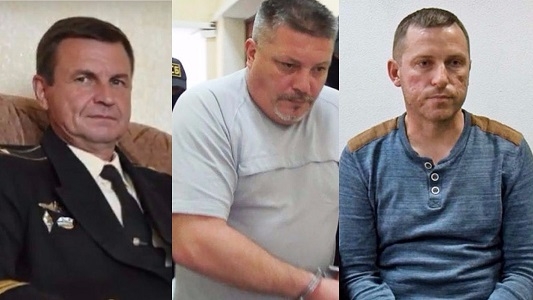 The ‘trial’ in Russian-occupied Crimea of two men arrested 18 months ago in the FSB’s second ‘Ukrainian saboteur’ plot has been delayed because of fatal contradictions between the indictment and evidence.  There have been absurd flaws from the outset in Russia’s attempt to present two well-known academics and a retired Ukrainian military officer as members of Ukrainian military intelligence, planning acts of sabotage in Crimea.

Russia’s first Crimea saboteur’ plot in August 2016 and attempt to convince the world that Ukraine was trying to ‘attack its own, annexed, territory met with well-deserved scepticism.  The same methods – torture and blocking access to proper lawyers – were used in a second wave of arrests in November 2016, but this time the FSB targeted men who could at least be proven to know each other.

On November 9, 2016, the FSB widely circulated videos showing the arrest, search and ‘confession’ of well-known academic Dmytro Shtyblikov, and the ‘confession’ of his colleague and friend Oleksiy Bessarabov.  It became clear that a third person – former naval captain Volodymyr Dudka, had also been arrested.

Russian television told their viewers that the business card was from the Ukrainian nationalist ‘Right Sector’ movement which is banned in Russia.  They preferred not to mention that this card had first been produced by Russia as ‘incriminating evidence’ in April 2014, after supposedly being pulled quite intact from a totally burnt and gutted out car.  That prompted a hilarious wave of Internet memes with the same card seen, for example,  handed from God to Adam in Michelangelo’s Sistine Chapel fresco.

There was no sign of the allegedly vast stock of weapons, etc., only the ‘confessions’ of Shtyblikov and Bessarabov, which both men gave while under FSB control and without lawyers.

According to Oksana Zheleznyak, Dudka’s lawyer, her client is accused of having a secret stockpile of explosives.

Dudka had recently become a grandfather and spent all his free time with his son and granddaughter, yet was supposed to have been planning acts of terrorism against vital infrastructure in Crimea.

Oleksiy Shtyblikov told Krym.Realii that his brother had been sent to Prison Colony No. 6 in Omsk (Russia).  For the first six months, he will not be allowed any visits and their only contact is through letters (which are checked by the prison administration).

Both Dudka and Bessarabov deny the charges, however Bessarabov’s family has largely avoided contact with human rights groups and only Dudka has an independent lawyer.

Dudka is now 54 and suffers from a cardiac condition and ulcer, which the appalling conditions of the Simferopol SIZO [remand prison] where he, Bessarabov and many other Ukrainian political prisoners are held, can only exacerbate.  He complains of the medical care in the SIZO, and that the medication he requires is not being passed to him.

Both 47-year-old Shtyblikov and 41-year-old Bessarabov originally studied in the intelligence faculties of military institutions and initially serve in the armed services.  Both, however, resigned from military service in the middle of the 2000s, and for a decade until February 2014, they worked together at the Nomos Centre for furthering research into geopolitical issues and Euro-Atlantic cooperation in the Black Sea Region.   Shtyblikov was the Director of International Programs while 41-year-old Bessarabov was Deputy Editor of the journal ‘Black Sea Security’. Both men were well-known beyond Ukraine.

The indictment against both Dudka and Bessarabov was returned to the prosecutor’s office on 4 April 2018, due to discrepancies.  Oksana Zheleznyak assumes that the case will soon again be returned to the ‘court’ for the trial to begin.