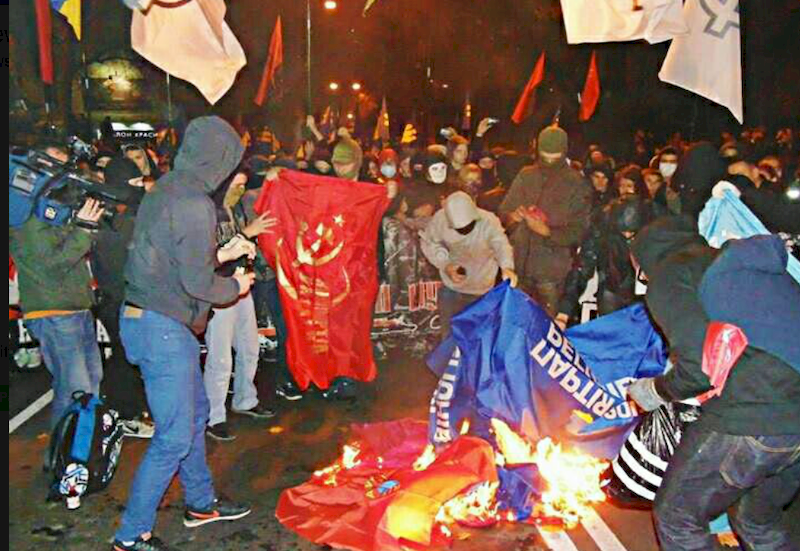 Police in Ukraine are unacceptably passive both during violent confrontations provoked by members of certain far-right extremist groups, and in investigating unlawful activities. There is a disturbing failure to properly investigate and prosecute even in cases where serious injuries have been inflicted.  The resulting sense of impunity is among reasons suggested for an alarming rise in unlawful activities by certain far-right extremist organizations in a new report published by Freedom House Ukraine Far-right Extremism as a Threat to Ukrainian Democracy.  The report’s author, Vyacheslav Likhachev has monitored and analysed trends with respect to anti-Semitism and xenophobia in Ukraine for well over 10 years, and has extensive knowledge of far-right movements in both Ukraine and Russia.

At a press conference on 12 June, Likhachev stressed the need to distinguish between those groups with right-wing views which function within the framework of a democratic state, and those which use political force against those they oppose, viewing this as a legitimate way of gaining their ends.  It is these latter organizations that he calls extremist, though stressing that Ukraine is fortunately not Russia, and this term does not have legal weight.

Likhachev warned soon after the war began in 2014 of likely problems when right-wing activists taking part in the fighting returned to civilian life.  He writes in the report that the idea of what is permissible and accepted has changed radically, as a result of the war and its effects.  There has also been an increase in violence due to the easy access to weapons that the conflict has brought. “The far right has found a home for themselves in this context. Moreover, they have a competitive advantage in the market of paid-for thugs.  Unlike regular thugs, they can mobilize additional support with the help of radical propaganda and lend an ideological purpose to an exclusively commercial dispute”.

Worth noting in this respect, that C14 quite openly offered heir services as thugs, with the Facebook post only removed after their advertisement offer thuggery for donations gained a bit too much publicity

Over recent months, Likhachev points out, there has been a steep increase in the number of violent interventions by such extremist organizations as C14 and National Corpus.  Amnesty International Ukraine has counted over 30 such cases, including attacks on national minorities, such as members of the Roma community.

As reported here, there were four attacks by C14 or the so-called ‘National Druzhyna’ vigilante groups in April and May.

The first such attack on 20-21 April, 2018 was even boasted about (in veiled terms) on Facebook by a prominent C14 activist. The Kyiv police initially claimed to have received no complaints from Roma families driven from a camp on Lysa Hora in Kyiv and to see no reason to take any action.  They were forced to change their position and, at least formally, initiate a criminal investigation only after LB.ua posted a video clearly showing families running in terror from the thugs.

The reference in the report’s title to the threat to Ukraine’s democratic development posed by such radical groups has nothing to do with empty sensationalism.  Likhachev stresses that the far-right is unlikely to be elected in the elections due in 2020.  Even the fact that some of the groups have had fighting experience and may have access to arms does not mean that they are ready or able to challenge the state, the report states.

These extremist groups do, however, pose a physical threat to people from ethnic and religious minorities; to LGBT activists, or those whom the far-right activists disapprove of for some other reason.

The report identifies the Svoboda Party (led by Oleh Tyahnybok); the National Corpus (led by MP Andriy Biletsky) and Right Sector as falling within the category of far-right extremist parties.

Only Svoboda and Right Sector took part in the last parliamentary elections, receiving 4.71% and 1.8%, respectively, of the popular vote.

The three parties are currently negotiating to run as one platform which would, presumably, enable them to overcome the threshold and enter parliament. If they do not succeed in uniting, then only Svoboda would stand a chance of winning enough support.

There are also a number of ‘extremist groupings’, including C14 and others.

Likhachev suspects that it is the lack of real prospects of success with the electorate that prompts some of these radical groups to engage in what the report refers to as ‘street politics’.  The groups use violent behaviour to aggressively impose their political and cultural agenda on society.

It is such activities that encroach upon fundamental rights and freedoms, and therefore on Ukraine’s development as a democracy.

Radical groups tried to disrupt twelve events during the first three months of 2018, with this significantly higher than five or ten years ago. The report mentions attempts to disrupt events on the Holocaust; on gender equality; LGBT rights, as well as the above-mentioned attacks on Roma settlements.

One event that is not mentioned, though it certainly demonstrated police inaction, was the disruption by C14 and activists from other far-right groups of a planned remembrance gathering on the 19 January anniversary of the murder in Moscow of rights lawyer Stanislav Markelov and Sevastopol-born journalist Anastasia Baburova.  Members of OZON, a civic initiative monitoring peaceful gatherings, reported that the police officers had taken no real measures to ensure the safety of participants in the remembrance gathering.  “Instead, even before the beginning of the action, they resorted to unlawful detentions of participants without any explanation.  They later tried to mask these as so-called ‘invitations’  [to the police station]”.  There was no reaction at all to the unacceptable hooliganism by C14 activists.

It got even worse.  The detained activists reported later that they had been ‘hunted down’ by the far-right thugs after leaving the police station.  A member of the Human Rights Information Centre who spoke with them believes that the thugs could have only discovered which station the activists were being held in from the police.

Likhachev reports truly alarming levels of impunity or procrastination.  The Svoboda party activists who threw grenades during a rally outside parliament in 2015, killing four national guardsmen, have not yet been convicted.

In February 2018, during clashes in Kyiv after a court hearing regarding the detention of Odesa Mayor Gennadiy Trukhanov, “National Druzhyna activists and members of other radical groups attacked police officers using gas cartridges and even firearms. The officers reacted rather passively; one activist, who shot and wounded a police officer, has yet to be taken into custody.”

The Freedom House report warns that “extremist groups have managed to restrict the rights and freedoms of Ukraine’s citizens; in particular, the right to peaceful assembly and freedom of speech. Law enforcement agencies have either failed to stop the attackers or banned the event on the grounds that they cannot guarantee the security of its participants. In some instances, they detained the participants themselves attacked at the event. Hence, wide swathes of society and the media generally either tolerate or do not notice the violence perpetrated by these far-right, extremist groups, who are actively undermining the government’s monopoly on violence.

The increasing use of street politics by the right-wing groups, including illegal activity, can be interpreted, in part, as an attempt to influence the sociopolitical climate in Ukraine by those who do not have sufficient and legitimate tools to do this.”

The report can be found in full here