Police, who watched on as homes were destroyed by Loschchynivka mob, now deny there were riots 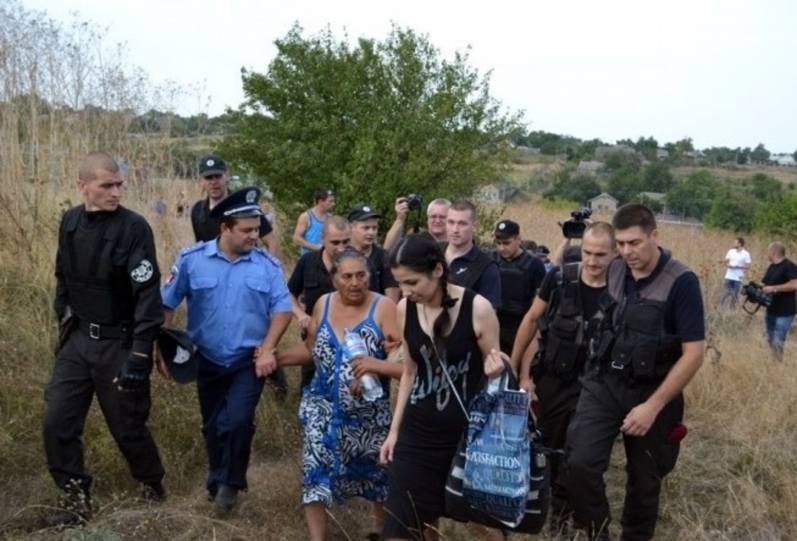 Almost two years after violent anti-Roma riots in Loshchynivka (Odesa oblast) made world headlines, the police are ignoring hard evidence of who was to blame and essentially denying that there were riots at all  The behaviour of the authorities back in August 2016 was widely viewed as setting a frightening precedence, and the message given by this stubborn refusal to hold those responsible to answer is equally dangerous.

The riots in Loshchynivka were triggered by the discovery of a 9-year-old girl’s body in an abandoned building.  A 21-year-old man, Mykhailo Chebotar was taken into custody on suspicion of rape and murder.  He was from Loshchynivka and had lived there all his life, giving the lie to the claims of those participating in the pogrom that they were against Roma who had arrived in the last three years.

The murder trial began in April and deserves greater attention than it has thus far received, given doubts about the case and Chebotar’s involvement in the killing.

As reported, the criminal investigation into police inaction during the anti-Roma riots on 27 and 28 August 2016 keeps being terminated by the prosecutor’s office, only to be reinstated again by the courts on application from human rights lawyers.  A third attempt to terminate it was made last week, with this also sure to be challenged in court.

Hearings have also begun at the Odesa District Administration Court over a complaint lodged by seven former Roma residents of Loshchynivka against the Mayor of the Loshchynivka Village Council Viktor Paskalov and the Odesa Regional Police.

Odesa human rights activist Tetyana Gerasimova was at the court hearing on 15 June, and presents a disturbing picture of the kind of word games used to try to deny the violent nature of the riots and even that the Roma who were driven from their homes could be called residents.

The claimants are asking the court to find that Paskalov broke the law by effectively supporting the rioters. At a village meeting on 28 August 2016, he told the crowd that Roma had committed unlawful acts and that therefore he, like other villagers, wanted only one thing – that the Roma stopped living in Loshchynivka.

Paskalov also signed and read out a ‘decision’ of this meeting spelling out “the demands of residents of Loshchynivka that the Roma did not live in Loshchynivka”.

Volodymyr Kondur, lawyer and head of the Roma Human Rights Centre, pointed out in court that not one person responsible for the destruction on 27 August 2016 had been detained.  The police had been forced to initiate criminal proceedings over the destruction of people’s homes and possessions, but the culprits were still now referred to as “unidentified individuals”.  This is despite the fact that there are video recordings on the Internet which enable identification of all those responsible.

Paskalov, in turn, had violated several constitutional norms through his signing of the ‘decision’ that the Roma should not live in Loshchynivka.

The police were represented in court by Oleksandr Panchoshak who, among other things, demanded proof that after their ‘eviction’, the Roma had not returned due to the threat to their safety.  He asserted that they “should have approached the police each time they had tried to return, but been stopped”.

As Gerasimova notes, this would have been to the self-same police who had stood by and done nothing when the Roma homes were destroyed.

Panchoshak also asked for proof of cases where Roma children had been obstructed from studying in the Loshchynivka school, with the fact that the families had been driven out presumably not a sufficient impediment.

There were also numerous attempts to blur the truth with euphemistic or downright inaccurate words.  Germasimova notes that Volodymyr Petrov, representing the Village Mayor, persistently avoided using the words “driven out”, “pogrom”, etc,  claiming instead that the Roma families “had left”.

The court proceedings at time seemed reminiscent of the tactics used by Russian propaganda media to blur uncomfortable questions about Russia’s role in the downing of MH17, etc.  When pulled up and told that the Roma had been driven out, Petrov came back with demands for ‘proof’, and the names of specific individuals who had forced them to flee.

Petrov also claimed that the absence of the word “eviction” from the decision that Paskalov signed indicated that neither the village gathering, nor Paskalov had had anything to do with this so-called ‘eviction’.

There were repeated attempts by the representatives of both the police and the Village Mayor to add irrelevant details, such as the fact that only two of the seven claimants had owned their homes, with the others renting.

It remains to be seen whether the judge will accept the Odesa regional police and Loshchynivka Mayor’s attempt to readjust the harsh facts regarding the events on 27 and 28 August 2016.  The court case, and indeed all proceedings over the Loshchynivka pogrom are of importance for Ukraine in general.

Volodymyr Kondur believes that the Loshchynivka riots opened a ‘Pandora’s box’ in Ukraine.  Failure to hold the authorities to account for their actions or inaction has given far-right organizations a sense of their own impunity.  As reported, since April this year, four Roma camps in different parts of Ukraine have been violently dispersed by thugs from C14 and other extreme groups.  In at least one case in Kyiv (on Lysa Hora), the police only initiated criminal proceedings after video footage was published in the media demolishing the version of events that the police themselves had pushed (details here).

Each time thugs are allowed to violently attack or drive out other Ukrainian citizens while the police do little or nothing increases the danger to all citizens, both from the vigilantes and from the unwillingness of the police to protect them.