Russian jailed for defence of Sentsov, Balukh and other political prisoners during World Cup 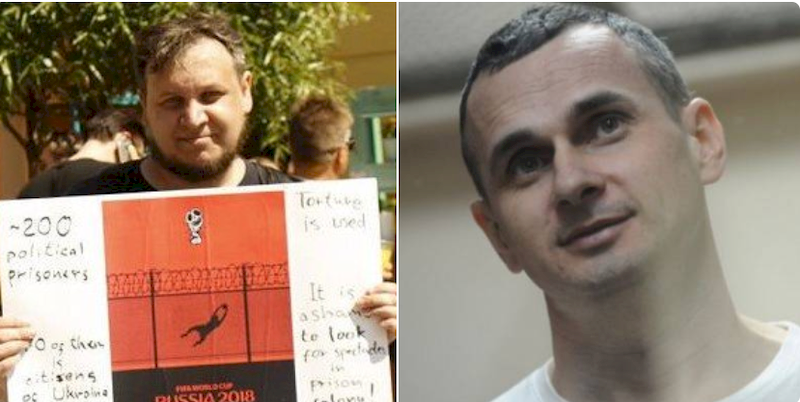 Dmitry Kalinychev from Nizhny Novgorod has been jailed for 25 days after a single-person picket on 18 June in defence of over seventy Ukrainian political prisoners held in Russia and occupied Crimea, as well as Russian political prisoners.  Even according to Russia’s repressive legislation, such solitary pickets are legal, however Moscow has clearly ordered a crackdown on protesters during the World Cup, together with the removal of down-and-outs and slaughter of hundreds of stray dogs.

Kalinychev’s brief single-person picket on 18 June took place while Sweden was playing South Korea in Nizhny Novgorod.  His placard, in English, has one of the stark images drawn by Ukrainian artist Andriy Yermolenko in protest at Russia’s hosting of the World Cup because of the blood on its hand from aggression in Ukraine, Syria and elsewhere.  The words are about 200 political prisoners, including over 70 Ukrainians.

The police turned up at his home that evening and arrested him, with a court on 19 June finding him guilty of what is termed ‘a repeat infringement of the rules for holding a public event’ (Article 20.2 § 8 of Russia’s code of administrative offences).

The ‘offence’ was breaching a presidential decree purportedly on safety measures during the World Cup.   These measures were clearly about ‘protecting’ football fans from the harsh truth about Russia’s political persecution and the multiple reasons why very many people believe Russia should not have been allowed to host the event and that others should have boycotted it.

This year Kalinychev has also faced persecution for his participation in a remembrance march honouring slain Kremlin critic Boris Nemtsov which the authorities had refused to ‘authorize’, and 20 days’ imprisonment for a street performance in March, entitled ‘Funeral of the elections’.

In Nizhny Novgorod, pensioner Vadim Glebov was detained for a single-person picket.  His placard read: ‘They try to pretend that they didn’t know how and for what the regime in power is killing Ukrainian filmmaker Oleg Sentsov and Crimean farmer Volodymyr Balukh’.

There were detentions also in Moscow on 19 June, with all those detained protesting legally about repression in Russian-occupied Crimea and calling for the release of Oleg Sentsov and Russian Memorial activist Oyub Titiev.

The fact that Kalinychev was arrested the evening after his protest makes it likely that the number of detentions for trying to draw attention to Russia’s grave human rights abuses, especially with respect to Ukrainian political prisoners, is actually much higher.

Oleg Sentsov has been on a total hunger strike since 14 May and has vowed to continue “to the end” unless all of Russia’s Ukrainian political prisoners are released. His cousin, Natalya Kaplan has just issued an appeal, explaining that there are fears that Oleg is in imminent danger of kidney failure because of his hunger strike. At any moment the Russian authorities could resort to force feeding “which even in Russia is equivalent to torture”.

While it is only politicians who have the levers to influence Russian President Vladimir Putin,  we can all help to ensure that politicians feel the need to intervene.  Kaplan asks people to sign the petition and, of course, to encourage others to do so.

There is also a model letter here to politicians about Sentsov’s case that could be used, or adapted to call for urgent action to save Oleg Sentsov’s life. 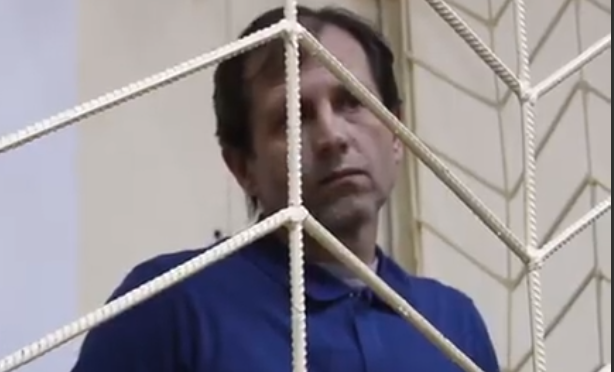 Although 47-year-old Balukh has agreed to take life-saving amounts of nourishment, he has now been on total or near total hunger strike since 14 March.  He is being held in the Simferopol SIZO [remand prison] where the conditions even for younger and healthier men amount to torture, and is not being provided with proper medical treatment.

The occupation regime has also come up with a second concocted criminal ‘trial’ of Balukh, who like Sentsov, has long been recognized as a political prisoner by the renowned Memorial Human Rights Centre.  The hearings also seem aimed at physically and mentally breaking down Balukh, with an ambulance needing to be called at the hearing on 18 June, and Balukh repeatedly complaining of chest pains which urgently need investigation.

Balukh is imprisoned in Russian-occupied Crimea for his pro-Ukrainian position and the Ukrainian flag which he refused to remove from his house (details here).