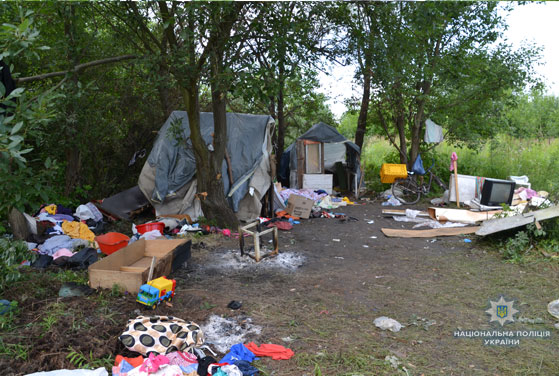 A 24-year-old was stabbed to death on Saturday night, in the latest savage attack on Roma settlements in Ukraine this year.  Four other people were injured, including a woman and a 10-year-old boy.  This is the first death, but there have been five attacks over recent months, with the authorities’ failure to react swiftly and adequately on the previous occasions unfortunately making such a tragedy seem inevitable.

On this occasion at least, the police do appear to have reacted well, as has the Mayor of Lviv, Andriy Sadovy.  He announced on 24 June that they were cooperating with the police, and that all members of the camp, who are witnesses in this investigation, are under police protection.  A young man remains in hospital, though his life is not in danger, and the woman and child were discharged after receiving stitching for their injuries.

Sadoviy reports that the police have established that most of the assailants were 17-18 (the police report says 16-17), and that there was an older person (20 years old) in charge, who has also been detained.  The dead man was stabbed by the group “with the clear purpose of killing him”.   The woman was stabbed after she tried to defend her 10-year-old son.  Sadoviy advises those who think the Roma deserve the treatment they get to bear all of this in mind.

The Lviv Regional Police say that they received a call about the attack by masked assailants on a Roma settlement in a forest area on the outskirts of Lviv around 23.30.  Judging by the police units sent to the scene, it is likely they already knew that somebody had been killed.  The police reportedly put an end to the violence, and detained seven young Lviv teenagers.  The timing, it has to be said, is rather strange.  If the police knew of the assailants’ carnage, so too did the culprits, yet the police assert that they are confident that they have caught the eight people involved.

The man killed has not been named, but he is known to have been 24.  He and the others were reportedly from villages in the Transcarpathian oblast.

According to the police, the suspected assailants have acknowledged involvement in an  organization called ‘Sober and angry youth’ [«Твереза і зла молодь»].  This organization does not have official registration, and it has clearly been hiding its tracks with its YouTube page disappearing, after the police arrests, on 24 June.

According to Zakhid.net, the YouTube page was entitled Lemberg Jugend, or Lviv Youth in German, with the name carrying obvious associations with Hitler Jugend.  One of the videos which called itself a “small report about a safari on gypsies” showed several adolescents harassing Roma.  There was apparently another video threatening to come looking for people taking drugs, and showing an attack by a group of adolescents on several young men. A Telegram page was created on 20 April 2018 (Hitler’s birthday) and had 51 people subscribing.  Zakhid.net writes that of the over 70 posts, many are in Russian, and most are motivating phrases in Nazi style.  One is a stylized picture of Hitler with the words: “An idea without deeds is dead”.   The organization uses symbols of the far-right Misanthropic Division.

Zakhid.net calls the situation around this group of adolescents who appear to have only begun posting Nazi slogans and images over the last two months, before taking up knives and attacking a Roma camp where they were immediately caught by the police  “rather strange”.  This begs the conclusion that either these young lads in their 16 or 17 years have vast experience but simple never came under police and security service focus earlier, and their arrest was a chance success by the police, or we know far from all about the true organizers of this attack”.

Perhaps the main development to be welcomed is that the head of the National Police, Serhiy Knyazev, has acknowledged that “such attacks on members of the Roma community by radicals have become more common.  Their immorality, as evidenced by this savage attack can find no justification, he says, adding that all of those responsible will be held to answer.

As mentioned, there have been four other attacks in Ukraine since April this year, and one of the concerns expressed after each has been the failure of the police to protect the Roma and to ensure that those committing such attacks understand that they will be caught and punished.

These are not the only attacks, raids, and other forms of illegal activities carried out by far-right radical groups like C14, National Corpus and others, and the fact that the police do so little was recently one of the criticisms level at the authorities in a joint statement by Freedom House, Human Rights Watch, Amnesty International and Front-line Defenders.

Volodymyr Kondur, lawyer and head of the Roma Human Rights Centre, is one of two lawyers seeking justice for Roma residents of Loshchynivka in the Odesa oblast, who were driven from their homes in August 2016.  The police had basically watched on as the people’s houses were destroyed, and not one person responsible for the destruction on 27 August 2016 had been detained.

Kondur believes that the Loshchynivka riots opened a ‘Pandora’s box’ in Ukraine.  Failure to hold the authorities to account for their actions or inaction has given far-right organizations a sense of their own impunity (more details here).