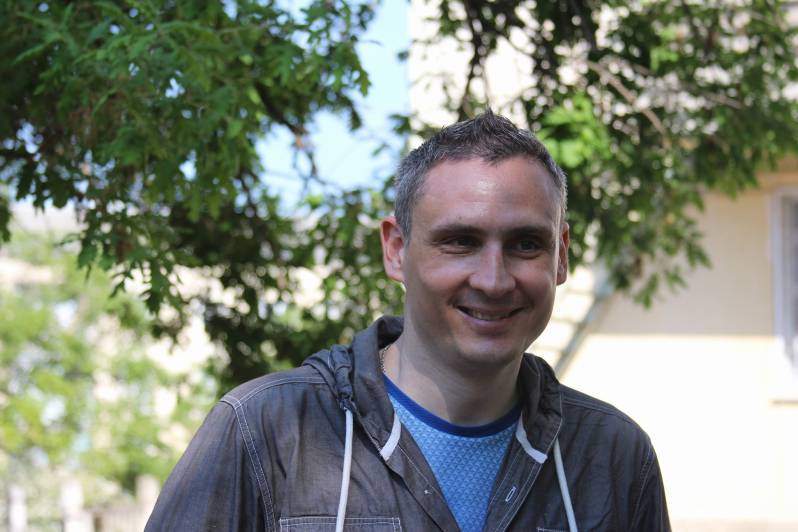 Sevastopol activist Ihor Movenko remains in the Russian-controlled Simferopol SIZO despite a new court ruling early on 26 June overturning any grounds for his detention. The excuse given, that the sentence has not arrived from the ‘Sevastopol City Court’, is absurd, and raises the fear that the FSB are seeking some means to keep Movenko imprisoned.

Court appeals under Russian occupation have become something of a formality, required for the eventual applications to the European Court of Human Rights.  Movenko had been sentenced to two years’ imprisonment for a comment on a social network, and that conviction should have been overturned altogether, however even the reduction to a one-year suspended sentence was an unexpected relief.  Movenko had been imprisoned since the first court’s two-year sentence passed on 4 May and should have been freed in the courtroom.  Instead he was returned to the Simferopol SIZO [remand prison], and was not released even on Wednesday.

40-year-old Movenko had been charged with making ‘public calls to carry out extremist activities’ over a comment he made on a VKontakte social media group ‘Crimea is Ukraine’.  The comment, about what should happen to traitors, after Russia’s occupation of Crimea ends, was strong, but rather an expression of ‘black humour’, Movenko says.

The comment was almost certainly a pretext, since it dated back to Summer 2016, and had doubtless been seen earlier by the Russian FSB who maintain close surveillance over the social media.  It was noticed only after events in which Movenko was undoubtedly the victim.

Movenko was attacked  on 7 September, 2016, after he stopped to get money out of a cash machine and then returned to his bike.  Movenko had stickers on the bike of the Ukrainian trident and from the ‘Azov Battalion’ which is now on Russia’s huge list of banned organizations.

The man who brutally assaulted him openly said that he was from the police, though he did not show any ID.  The Crimean Human Rights Group later did in fact identify him as Volodymyr Sukhodolsky, who had served in a Berkut special force unit before becoming a turncoat in 2014.  He is now working for the Russian police.

During the later court hearings, one of the official ‘witnesses’ of this search, whom the FSB almost certainly (and illegally) brought with them, was questioned.  He confirmed that during the search Movenko had been held, with his hands in handcuffs behind his back, and had not been allowed to contact a lawyer.

Movenko was formally charged in November 2017 over the social media comment, which the FSB claimed were ‘public calls to carry out extremist activities’.

Under the Russian legislation being illegally applied in Crimea, this can carry a sentence of up to five years’ imprisonment.

In fact, the ‘prosecutor’ had only asked for a suspended sentence, so the 2-year real sentence issued by ‘judge’ Pavel Kryllo from the Gagarin District Court in Sevastopol was a major blow.  Movenko was taken into custody in the courtroom.  That ruling was reduced on 26 June, by ‘judge’ Vasily Akhimov from the Sevastopol City Court, though as of late in the night of 27 June ignored.