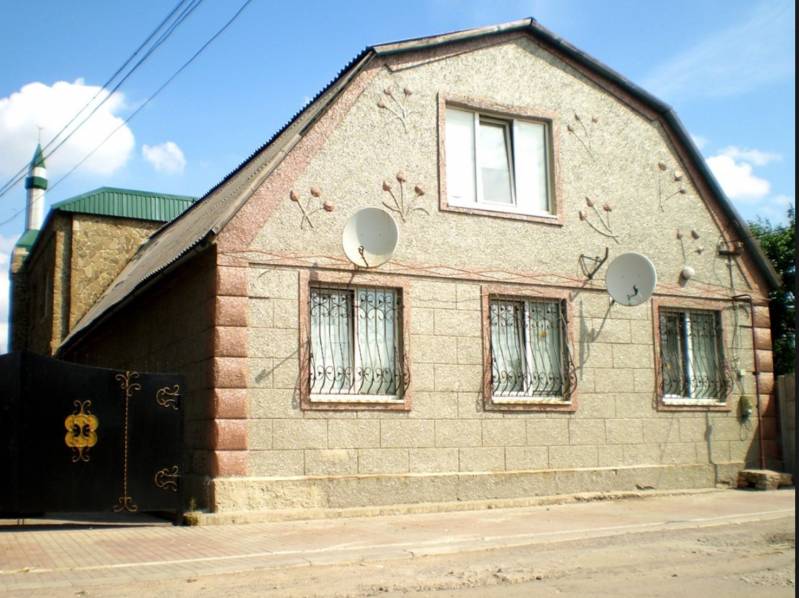 The only mosque still functioning in occupied Donetsk has been closed after a search and interrogation of the Imam and several believers.  This raid, as well as allegations of ‘extremism’ made by representatives of the self-proclaimed ‘Donetsk people’s republic’ [‘DPR’], are disturbingly reminiscent of repressive measures against Muslims in Russian-occupied Crimea. There has long been persecution of many Christian churches and believers in Russia’s proxy ‘republics’, and it is feared that Muslims are now also to be targeted..

The raid on the Al-Amal’ Mosque in Donetsk took place over a week ago, however the first report of it came only on 27 June from Ihor Kozlovskyy, the renowned religious scholar held hostage for almost two years by the so-called ‘DPR ministry of state security’.   Said Ismagilov, Mufti of the Spiritual Directorate of Muslims of Ukraine [UMMA] has now been able to confirm the information, though details remain scant.  Said Ismagilov says he has no idea why the ‘DPR’ militants were silent about the raid for so long, but he agrees with Kozlovskyy that this seems a worrying new escalation in ongoing religious persecution in the proxy republics.

There were up to 200 thousand Muslims in Donbas before the beginning of the war in 2014.  It is impossible to know exactly how many have remained, but Said Ismagilov believes that there are likely to be tens of thousands.

In Donetsk, the Al-Amal Mosque was the single place of worship for Muslims.  Over the last four years it had not experienced any problems from the ‘DPR’ militants, although from the beginning the so-called ‘DPR security service’ sent ‘observers’ who were present at all prayers, festivals and public gatherings.  Much the same ‘surveillance’ was reported by the Russian FSB [security service] was reported within months of Russia’s invasion in occupied Crimea.

During the search of the Mosque, the ‘DPR security ministry’ removed prayer books and religious literature which they claimed ‘incites enmity’, as well as the Ukrainian-language Umma newspaper, published by the Spiritual Director of Muslims of Ukraine.  Said Ismagilov accuses the militants of having planted some literature, but also categorically rejects any suggestion that the UMMA newspaper incites hatred to anybody.

The Imam and believers were eventually released under a signed undertaking not to leave Donetsk.  The Mosque itself has been sealed up, and Muslims prohibited from gathering there for worship.

A report on the ‘DPR security ministry’ website from 27 June is disturbingly similar in style and content to statements issued by Russia’s FSB.  It claims that they have stopped the activities of “a pseudo-religious Islamist organization” whose management supposedly engaged in propaganda of the “international terrorist organization  Muslim Brotherhood”, and also circulated material of an extremist nature.

The ‘DPR security ministry’ claims to have established that the Mosque at No. 2 Beresteiska St. was “a cell of the Ukrainian extremist organization ‘Alrayid’ and of UMMA”.  These it alleges, without providing even a glimmer of evidence, “were formed in Ukraine from Muslim Brotherhood funds”.

The report concludes by stating that an investigation and operational work are now  underway, “aimed at documenting cases of criminal activity and identifying those responsible for extremist activities  in the ‘DPR’”.

Alrayid issued a statement on 29 June condemning the latest religious persecution and rejecting all allegations of ‘extremism’ as absurd and without any foundation.

Most importantly, it explains that while an Alrayid Islamic Cultural Centre had existed on Beresteiska St. “before the war and occupation, it ceased its activities in the Spring of 2014. After the occupation of Crimea and Donbas, Alrayid has totally ended any activities on occupied territory. Since then, Muslim communities and organizations function there on an autonomous basis.  They do not have any contact with Alrayid, are not financed by nor subordinate to it”.

The situation changed immediately and radically, first in Crimea and then in those areas of Donbas under Kremlin-backed militant control.  In Donbas it was mainly Christians from all but the Orthodox Church under the Moscow Patriarchate who came under massive pressure and experienced religious persecution, probably because so many of the armed paramilitary groups fought under the banners of the Russian Orthodox Army and the Cossack Army.

The authors of a 2015 study, entitled ‘When God becomes the weapon’  presented considerable evidence both of religious persecution by militants in Donbas, and of the role played by Russia and its armed criminal ‘crusaders’ in crimes against humanity in the region.  They pointed out that “open sources and witness testimony indicate that these armed groups also have local support from the clergy of UOC-MP and the Russian Orthodox Church”.

That report cited examples of some Moscow Patriarchate priests who “have, to varying degree,  supported these illegal paramilitary groups in their campaign against representatives of Protestant, Evangelical and Catholic Churches, and Orthodox believers who do not recognize the Moscow Patriarchate.”

Particularly targeted were the believers of different faiths (including Mufti Said Ismagilov) who took part in the Prayer Marathon on Constitution Square in the centre of Donetsk.  Believers gathered each day to pray for Ukraine’s unity and for peace, standing under the Ukrainian flag. The Prayer Marathon continued for 158 days, although it became more and more dangerous with each day.  16 participants ended up taken captive, with 5 of them subjected to mock executions, and one person killed.

One of the organizers of the Prayer Marathon was the late Oleksandr Khomchenko, then Pastor at the ‘Word of Life’ Church in Donetsk. In an interview given in 2016, he explained that at the beginning there had been as many as 300 worshippers, however the prayer tent had been attacked four times and people were understandably afraid.  A number of priests and pastors had been abducted during those months, and you could get killed just for wearing a ribbon in the colours of the Ukrainian flag on your clothes.

He was seized by the militants on August 4, 2014, together with two other people. They were soon released, however he was held and tortured for nine days.  He recounted that they had staged fake firing squads three times in the four days he had been held prisoner, and said that during the first day in captivity, he heard Ukrainians being killed.  One person was killed by machine gun fire, another when the militants tested a grenade thrower.  One person was forced onto his knees and shot dead with a pistol.

Although Ihor Kozlovskyy was seized in January 2016, long after he and other participants in the Marathon had been forced to stop gathering, his ‘arrest’ coincided with an attack on the Ukrainian Greek-Catholic Church and what the Russian-controlled militants called ‘sects’.

Although Muslims do not seem to have been so ferociously targeted, some were undoubtedly in grave danger.  In mourning the death of Oleksandr Khomchenko in February 2018, Said Ismagilov recalled that he owed his life to Father Oleksandr, who came to him as soon as he was released and told him to go into hiding immediately, as he would be next.  It was thanks to this warning, that the militants did not find him when they arrived at the Mosque.

Over the last year, persecution has increased in both the so-called ‘Donetsk and the Luhansk people’s republics’ of Jehovah’s Witnesses, with this directly following Russia’s extraordinary ban of this world faith as supposedly ‘extremist’.

The Kremlin’s Donetsk proxies now appear to be following another repressive Russian practice, that of claiming, without any justification, that Muslims, peacefully exercising their faith, are ‘extremist; and engaged in ‘criminal activity.