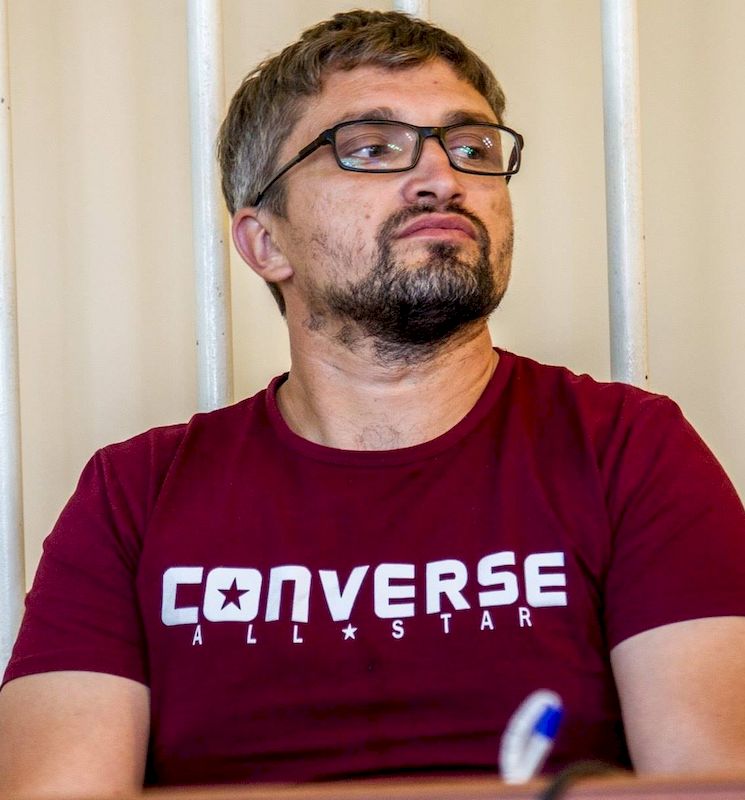 Three months after his arrest on charges linked with entirely innocuous pre-annexation YouTube videos, Nariman Memedeminov has been forcibly placed in a psychiatric hospital in Russian-occupied Crimea.  There was no court order and no reason at all for demanding that the widely respected civic journalist undergo a psychiatric assessment.

Memedeminov’s lawyer, Emil Kurbedinov has condemned the move as still further pressure on the Crimean Tatar activist for his principled civic position.  He stresses that it is degrading for a psychologically healthy person to be forced to stay in an institution intended for treating people with psychological disorders.

The FSB in occupied Crimea first used forced incarceration in such a psychiatric unit against Crimean Tatar Mejlis leader Ilmi Umerov, whose very grave medical conditions made any imprisonment a direct danger to his life.  That senseless brutality aroused international condemnation, yet the practice has since been applied against many other political prisoners.

As reported, Nariman Memedeminov was arrested on 22 March 2018.  In standard fashion, a search was first carried out with armed and masked enforcement officers bursting into the Memedeminov home in Kholmovka (Bakhchysarai district) where young children were fast asleep. Using totally unnecessary force and foul language, the men broke down the front door and then seized Memedeminov, forcing him to the floor and putting handcuffs on him.

Such behaviour, and the cordon imposed around the house, might be understandable if the officers were trying to catch a hardened criminal.

Instead, they had come to the home of an activist from the non-violent civic initiative Crimean Solidarity, which provides legal advice and support for political prisoners and their families.  Memedeminov himself has worked tirelessly in reporting on just such armed searches of civic activists and politically motivated court hearings.  He is not a journalist by profession, but had taken on the task of providing information about such repressive measures given the lack of independent media and effective information blockade imposed since Russia’s annexation of Crimea.

The FSB had initiated criminal proceedings against him over videos posted on YouTube in 2013, well before annexation.  In the videos in question he condemns Russia for persecuting Muslims and expresses his views about the revival of the Khalifate.

The FSB are claiming that this falls under Article 205.2 § 2 of Russia’s criminal code – public calls to carry out terrorist activities, public justification of terrorism or propaganda of terrorism.

These extraordinary charges about videos that have literally nothing to do with terrorism or violence are based solely on the fact that Memedeminov was reporting on events linked with Hizb ut-Tahrir – on a festival and on a forum that was prevented from taking place.

Hizb ut-Tahrir is a peaceful pan-Islamist movement which is legal in Ukraine and which is not known to have committed an act of terrorism or violence anywhere in the world.  Russia’s Supreme Court declared it, and 14 other organizations, ‘terrorist’ in 2003, during a hearing which members of the organization and human rights groups learned of only after it was too late to lodge an appeal.  Russia has since used this ruling to sentence men to huge terms of imprisonment on entirely fictitious ‘terrorism’ charges, without even providing real proof that the men were involved in Hizb ut-Tahrir.  It began such arrests in occupied Crimea in January 2015, and has so far arrested 29 men, including human rights activist Emir-Usein Kuku and several civic activists from Crimean Solidarity.

The charges against Memedeminov are especially absurd since they pertain to videos posted five years ago.  Even Russia cannot deny that in 2013 Crimea was part of Ukraine where Hizb ut-Tahrir was and remains completely legal.

Human rights groups are convinced that Memedeminov is imprisoned because of his civic activism and journalism.

This is not the first time that the civic journalist has been targeted since annexation.

His family were first subjected to a search back in February 2016, and then on 13 July 2017, he faced administrative prosecution and a 10 thousand rouble fine for a supposedly ‘unauthorized’ meeting.  In fact, he and other Crimean Tatars had been standing near the home of Seydamet Mustafaev where an armed search was taking place.

Russia has increasingly used repressive measures, including arrest and imprisonment, against civic activists, especially those involved in Crimean Solidarity. It is no accident that the search of the Memedeminov home on 22 March 2018 was dramatically different from the search two years earlier when the enforcement officers had at least been civil and had tried not to frighten the children.

The Memedeminovs have three small children: 11-year-old Zeynep and her younger brothers – Ibragim who is seven and Bilyal who is just four years old.

Ibragim had been asleep in the room opposite the entrance when the masked men burst in.  Since then, he has refused to sleep in that room.

Zeynep initially agreed to speak with the Krym.Realii journalist.  She tried several times, however burst into tears each time she tried to speak about the events on 22 March and seeing her father taken away in handcuffs.