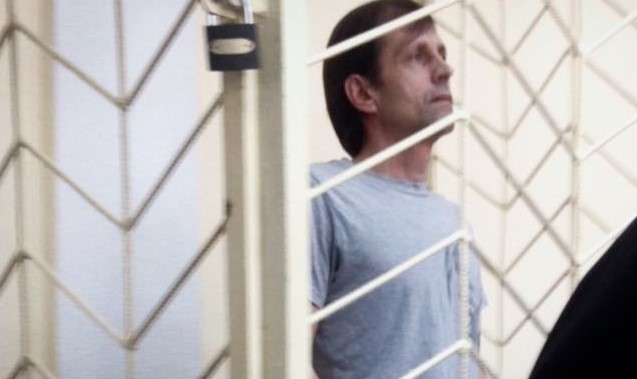 He is not, however, broken, as his words to the court made clear.

“This trial demonstrates one thing alone: the aim of all of this is to punish a person for free thinking and for love of his country. Introduce an article (of the criminal code) for hating this system, and then I will happily write a confession.  You can even give me a life sentence then  – it would be much more honest than what’s happening here.  It is only out of respect for the people who come here to support me that I’m taking part in this farce”.

The charges of ‘disorganizing the work of the detention unit’ (under Article 321 § 2 of Russia’s criminal code) are both farcical and false.

The prosecution claims that Balukh had, on 11 August 2017, attacked the head of the temporary detention unit in Razdolne,  Valery Tkachenko and then poured a cleaning substance over him.  Balukh had repeatedly complained that Tkachenko was taking every opportunity to harass and insult him, and the defence is adamant that video footages demonstrates that the circumstances of the incident on 11 August were quite different.  Balukh was standing with his face to the wall and surrounded by police officers.  Tkachenko walked past, and, using his elbow, pushed Balukh in the back.  Balukh was pushed against the wall, almost hitting his head, and instinctively lashed out, hitting Tkachenko in the stomach.  That resulted in a conflict with mutual abuse, after which Tkachenko can be seen lashing out and hitting Balukh once more.    The video later shows Tkachenko going into Balukh’s cell, where the latter says he was subjected to a torrent of serious insults.  These, like earlier harassment, had targeted Balukh’s elderly mother, other relatives, etc. and Balukh reacted by directing a canister with some cleaning substance in Tkachenko’s direction.  The lid unfortunately came off and the substance spilled on Tkachenko.

The defence has learned that it is Russia’s Investigative Committee that has insisted on concocting charges of ‘destabilization’ out of this extremely minor incident which should, at least, have resulted in some disciplinary penalty.

Instead, the Razdolne ‘prosecutor’ Dmitry Nikolaevich Shmelev demanded four years in medium security prison, on top of the first sentence of two years with a 10 thousand rouble fine. Shmelev claimed that Balukh’s “guilt and intent are confirmed by testimony from the victim and witnesses, as well as the detention unit’s video and confirmation from the hospital that Valery Tkachenko suffered a soft-tissue injury in the spinal area”.

Defence lawyer Olga Dinze asked for an acquittal given the lack of any crime.  She stressed that Balukh’s actions should be deemed legitimate self-defence which had in no way disorganized the work of the unit.

47-year-old Balukh has been on hunger strike since 19 March 2018.  On the 25th day, he began taking the minimum amount of food needed to prevent the occupation authorities from applying force-feeding.  This symbolic amount of food was used by the Russian-controlled prison and court to ignore the need for medical care and a separate cell.  There appear to have been no changes made to the appalling condition in which he (together with other political prisoners) is held in at the Simferopol SIZO [remand prison].  This is despite the fact that since 23 June Balukh has again been refusing all food and is evidently very weak.

Balukh had suffered a string of administrative prosecutions on trumped-up charges from the beginning of Russia’s occupation of Crimea, with all very clearly linked with the Ukrainian flag he insisted on flying over his home and his unconcealed opposition to Russia’s annexation.

He was first arrested on criminal charges on December 8, 2016, nine days after he nailed a plaque renaming his home No. 18 “Heroes of Nebesna Sotnya St’ in memory of the over 100 Maidan activists who were killed during Euromaidan.  He had rejected demands from the head of the local council to remove it.

The arrest followed an unexplained search which allegedly found 90 bullets and several trotyl explosive devices in his attic.  He had no record of violence and the constant searches and harassment he had faced since Russia’s invasion of Crimea for his openly pro-Ukrainian position made it inconceivable that he could have held anything illegal in his home.  This was one of the multiple reasons why the Memorial Human Rights Centre almost immediately declared him a political prisoner.

Despite all of the above, Balukh was sentenced to 3 years and 7 months’ imprisonment by Razdolne court ‘judge’ Maria Bedritskaya on August 4, 2017.

During the appeal hearing on October 2, the High Court in occupied Crimea revoked the sentence, having accepted the submission from lawyer Olga Dinze that Maria Bedritskaya should not have been the judge, as she had been involved in the earlier administrative prosecutions.

Balukh was very fleetingly released under house arrest, only to be taken back into custody on 16 January 2018, after ‘judge’ Yelena Tedeyeva from the same Razdolne District Court,  passed an identical sentence to that which had been overturned.

Volodymyr Balukh is clearly in prison for remaining true to Ukraine, with the Russian occupation regime’s revenge also directed against his elderly and nearly blind mother who has been left alone with no possibility of even seeing her son.