Russia forced to retract insane charges against tortured Ukrainian, yet jailed him for 8.5 years anyway 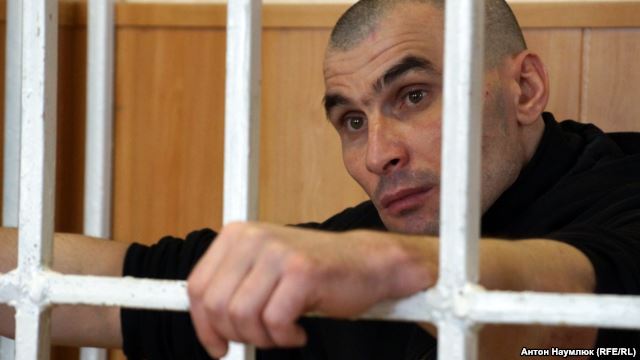 35-year-old Serhiy Lytvynov remains imprisoned in Russia four years after a fateful tooth inflammation led to him becoming one of the first and unlikeliest of Russia’s Ukrainian political prisoners.  Following the tragically premature death of his lawyer Viktor Parshutkin in March 2017, he has also become the most abandoned of all political prisoners.

Lytvynov is imprisoned near Magadan in the Far East of Russia, in the  area of the Soviet Gulag camps.  According to Stanislav Ogorovy, Ukraine’s Ambassador Diana Ivanova has only recently been able to visit him, although she had long sought permission to see him.

She reports that Lytvynov has lost 17 kilograms over the last six months due to the appalling food in the harsh-regime prison and the fact that he is not receiving parcels from Ukraine. He has spent the last six months in a damp cell without proper ventilation which can only have an adverse effect on his state of health.

Lytvynov was provided with clothing for the bitter winters, but not for the summer, and so has been forced to wear non-prison clothes (a T-shirt and black trousers).  Although this was precisely because prison clothes were not provided, the prison administration called that an infringement of the rules and put him in a SHIZO, or punishment cell.  Ogorovy notes that this is the same SHIZO that veteran Crimean Tatar leader and Ukrainian MP Mustafa Dzhemilev was once held in.  The latter spent 15 years in Soviet labour camps for peacefully upholding the right of his people to return to their Crimean homeland and human rights in general.

Russia is continuing to flout a European Court of Human Rights ruling ordering it to stop holding prisoners so far from their homes.  In Lytvynov’s case, home is the Luhansk oblast, and he himself would like to at least be returned to the Rostov oblast in Russia where he was ‘tried’. This would fully comply with Russian norms, but these, like so much else, are not applied when it comes to the Ukrainians Russia is illegally holding prisoner.

Lytvynov was a farm worker in the Luhansk oblast when, in August 2014, he was forced to cross the border into Russia’s Rostov oblast to get treatment for a severe tooth inflammation.  He had no choice since Kremlin-backed militants had seized control of the territory where alternative hospitals inside Ukraine were located.

While recuperating in hospital, Lytvynov was noticed by some Russian / pro-Russian militants who were being treated (in Russia) for injuries received in Donbas.  They decided that Lytvynov, presumably by virtue of being Ukrainian, should be ‘reported’.   He was seized from the hospital, viciously tortured into signing ‘confessions’ to multiple war crimes which he was supposed to have committed as a member of the Dnipro volunteer battalion.

Lytvynov was accused of having personally carried out murders of civilians, including women and children.  The Investigative Committee even demonstrated a video with Lytvynov ‘confessing’.  This was widely, and without any restraint, reported by the Russian media, with Lytvynov everywhere presented as a monstrous war criminal.

Lytvynov was only later given access to a proper lawyer, Viktor Parshutkin, and immediately explained that his ‘confessions’ had been extracted through torture.

Parshutkin succeeded in proving that the impugned war crimes had never taken place and could not have since neither the alleged victims, nor their addresses, actually existed. He also demonstrated that Lytvynov, who has learning difficulties, had simply signed the ‘confessions’ put in front of him.

Lytvynov had already been in custody for almost a year and, after all the hype and publicity over fictitious war crimes, the investigators had no intention of simply releasing him.  Immediately after the Investigative Committee was forced to withdraw the other charges, a Russian national, Alexander Lysenko, suddenly appeared and claimed that Lytvynov, together with two unidentified Ukrainian soldiers, had robbed him in Ukraine at gunpoint.  Lytvynov was supposed to have burst into a house, armed with a machine gun, beaten up Lysenko and stolen two cars.

There was virtually no attempt to make the charges seem plausible and every aspect of this new ‘case’ was demolished in court, yet Lytvynov was still sentenced to 8.5 years’ imprisonment.  That sentence was upheld by the appeal court.

Lytvynov – and Ukraine – were fortunate that Parshutkin took on Lytvynov’s case, and not only because of his success in proving that the ‘war crimes’ were fiction.  He also used Russia’s own laws on compensation to demand what Lytvynov is legally due – a formal apology and compensation.

In July 2016 he filed the suit for Lytvynov’s compensation over his imprisonment from Aug 22, 2014 to July 8, 2015, and the torture he had been subjected to.  The legal document noted that, although the torturers’ identity had not been established, the fact of the torture was not disputed.

Parshutkin therefore demanded for his client 1 million roubles in compensation for the wrongful imprisonment and 2 million over the torture.  The respondents were the Russian Finance Ministry; the Investigative Committee and the Prosecutor General’s Office.

The Basmanny Court in Moscow is notorious for politically motivated rulings.  At the hearing on Nov 15, 2016, it could not dispute the justification for the suit, since there were documents confirming that Lytvynov was wrongfully imprisoned and tortured.  Instead it awarded the absurdly nominal sum of 15 USD in ‘compensation’. This was despite the fact that, even according to Russian legislation, Lytvynov was a victim of a miscarriage of justice from August 2014 until July 2015.

Viktor Parshutkin had earlier forced a formal apology for Lytvynov’s torture, and had been planning to file a defamation suit on Lytvynov’s behalf against several Russian state-controlled media when he died suddenly in late February 2017, aged just 57.

Please write to Serhiy Lytvynov!  Your letters will tell him, and the Russian authorities, that he is not forgotten.