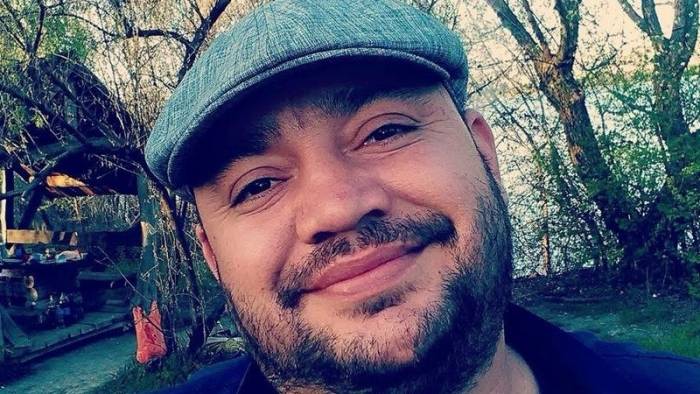 Akhtem Mustafaev has fled to mainland Ukraine a week after his ‘interrogation’ and alleged torture by the Russian FSB in occupied Crimea.  The FSB’s interest is almost  certainly linked solely with Mustafaev’s work as driver for the family of veteran Crimean Tatar leader Mustafa Dzhemilev, and only strengthens the suspicion that a recently announced criminal prosecution is an attempt to discredit respected Crimean Tatar leaders, as well as the Mejlis, or self-governing body, of the Crimean Tatar people.

The information initially came from Abdureshit Dzhepparov, Coordinator of the Crimean Contact Group on Human Rights who helped Mustafaev escape to mainland Ukraine. .  Safely now in Kyiv, Mustafaev spoke of his experiences at a press conference with Mustafa Dzhemilev on 10 July. .

On 28 June, a search was carried out of his home in Bakhchysarai.  He was not at home at the time, but was seized by the FSB near the Dzhemilev home.   He says that they forced his arms behind his back and handcuffed him also putting a bag over his head.

He was taken to a building  where they took him down some stairs to a basement.  There they asked him questions about his trips to mainland Ukraine, about his relations with Mustafa Dzhemilev and his assistant, Erol Veliev, as well as an alleged arson attack of home of the Mufti of Crimea.  All of this was accompanied by beating as well as forms of torture and threats that “nobody would find him”.

Mustafaev says that the ‘interrogation’ went on for around four hours.  After it, he was forced to sign a statement that he had agreed to not divulge any information and that no force had been applied.  This they also made him read out on tape.

It was only after this that he was taken to the FSB offices in Simferopol where he was interrogated by an FSB investigator with a protocol drawn up.  After this he was released, with  lawyer  Edem Semedlyaev being informed that Mustafaev had been ‘questioned’ as a witness.   After the treatment he had already received, Mustafev preferred not to wait for a possible repeat, and was helped to reach Kyiv.

Details of the violence used, together with the threats, are, unfortunately,  very similar to the accounts of other men who have been taken away by the FSB, such as Rinat Paralamov  and Asan Egiz.

There are, as mentioned, other strong grounds for scepticism about the ‘case’ which the FSB have linked Mustafaev to. On 21 May, 2018, Oleksandr Steshenko, the young Ukrainian who had disappeared after being seized by the FSB in occupied Crimea, was shown on Russian television ‘confessing’ to involvement in an ‘extremist group’ supposedly created by the Head of the Crimean Tatar Mejlis.  This alleged ‘plot’ had been made public just days after Ukraine approached the International Court of Justice asking why Russia was continuing to flout the Court’s direct order to end its ban of the Mejlis.

The attempt to discredit the Mejlis seemed extraordinarily clumsy, with the story ‘backed’ only by the testimony of a young man detained on a totally different pretext, then abducted before his lawyer was able to speak to him and held incommunicado for almost a month.

The FSB story is that an ‘extremist group’ was started up by Erol Veliev, an adviser to Mustafa Dzhemilev who was the first Head of the Mejlis and is also a longstanding Ukrainian MP.  Veliev is supposed to have been taking orders from the current Head of the Mejlis, Refat Chubarov.

Russia banned both Dzhemilev and Chubarov from their homeland in the first months after its invasion and annexation of Crimea and it has since initiated surreal criminal proceedings against them.  One of the charges against Dzhemilev appears to have been of trying to ‘illegally enter’ his homeland, illegally occupied by Russia, while Chubarov is accused of making ‘public calls to action aimed at violating Russia’s territorial integrity’.  That is what Russia tries to call Chubarov’s position that Russia must stop occupying his Crimean homeland.

Veliev is supposed to have formed this ‘extremist group’ in Kharkiv together with two ‘boxers’ – Oleksandr Steshenko and Oleksandr Tretyakov.

The FSB claim that the “the extremists were planning to carry out crimes motivated by political animosity aimed at frightening pro-Russian Crimean Tatars and heightening inter-ethnic tension in Crimea”.

In January 2018, they allegedly carried out an arson attack, with the use of Molotov cocktails, to the home of the Mufti of Crimea Emirali Ablaev who has, according to the FSB, “made a considerable contribution to strengthening national unity”.

The FSB assert that the supposed members of this ‘extremist group’ were promised 500 dollars for each ‘action’ in Crimea.

Steshenko was purportedly ‘uncovered’ as he tried to enter Crimea in April on Veliev’s orders to carry out ‘provocation’ on the eve of the signing of a presidential decree on ‘rehabilitation’.

Refat Chubarov responded by mentioning reliable information that Steshenko had been tortured.  He believed that this new ‘FSB plot’, and the arrest that same day of civic activists Server Mustafaev and Edem Smailov were aimed at trying to justify repressive measures against the Crimean Tatar people by claiming that this is about fighting ‘terrorism and extremism’.

Since no charges were attempted against Mustafaev, it is possible that the FSB hoped to terrorize him into giving false testimony against Mejlis leaders.  It was unlikely that they would simply accept their failure, and Mustafaev may well have been wise to get out before they came for him again.