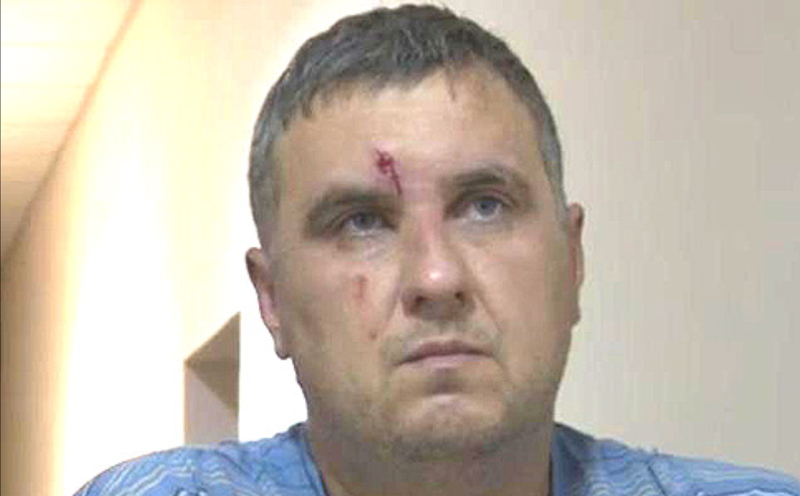 The de facto prosecutor in Russian-occupied Crimea has demanded that Yevhen Panov be sentenced to ten and a half years’ imprisonment despite the lack of any evidence that there ever was a Crimean saboteur plot which he is supposed to have organized.  There are reasons for suspecting that the steep sentence is in revenge for Panov having refused to play ball, by ‘confessing’ to crimes that neither he, nor anybody else, had actually committed.

In his final words to the ‘High Court’ in Simferopol on 9 July, Panov did not deny the ‘political motives’ that the de facto prosecutor had spoken of.  He does indeed have a negative attitude to Russia and all that it has done.  For that he has no need to apologise.  The charges, however, are without basis since, regardless of his political position, he has not committed any crime.   He added that he would not make any request of the ‘court’ as “under such circumstances and supposed crimes, they should execute me”.

During the final hearing, the de facto prosecutor Esvet Furmanbetov asserted that Panov’s ‘guilt’ had been proven and asked for the above-mentioned sentence in a maximum security prison colony.   The verdict is due to be read out on 13 July by presiding ‘judge’ Andrei Paly.

Panov’s mother, Vera Kotelyanets had travelled from Zaporizhya to be at the hearing, yet was prevented by the court bailiffs from entering.

The ‘trial’ began on 16 April 2018, after almost two years held in detention, during which time Panov was put under enormous pressure to ‘confess’.  Panov resisted the pressure, and during the first ‘hearing’ called the indictment “the FSB investigator’s fantasy”.

Panov is accused of having planned acts of sabotage in Crimea as part of a group, as well as of “smuggling ammunition across the customs border of the Customs Union”, with four articles of the Russian criminal code listed (Article 281 § 2a for the planning acts of sabotage; Article 226.1 § 3 and 222 § 3 over the alleged movement and storage of ammunition, as well 30 § 1, and 3 – committing or attempting a crime).

The group had supposedly planned acts of sabotage on civilian and military sites in Crimea, including a water reservoir; a Russian military unit; a ferry crossing; a chemical factory; and Pantsir C1 self-propelled anti-aircraft military weapon systems..

The first they learned of his whereabouts was on August 10 when Russia’s FSB [security service] claimed that it had foiled terrorist acts planned by the Ukrainian Defence Ministry’s military intelligence and targeting critically important parts of Crimea’s infrastructure.

The FSB asserted that there had been major incidents, with shelling from mainland Ukraine, during the nights from 6-7 and 7-8 August, 2016 with 2 Russians – an FSB officer and a soldier – killed.  Although two Russians did die, there are independent reports suggesting that at least one of the men was killed in a drunken brawl.  There was nothing to back the claims about the second night and supposed shelling from Ukraine.  Scepticism was only exacerbated by the fact that the occupation regime had blocked various independent Internet sites prior to the alleged events.

On the FSB video, shown widely on state-controlled Russian media, Panov showed clear signs of having been beaten, and said that he had been working for Ukrainian military intelligence.  Neither he, nor the other three men, mention each other at all, though all four ‘confessions’ were supposed to pertain to the same ‘conspiracy’.  The Panov video with his ‘confession’, as well as the supposed find of his and Andriy Zakhtei’s stockpile of weapons, was particularly sloppy.  One scene, for example, was at full moon, which meant it had to have been taken some three weeks earlier.

An independent forensic analysis found no traces to suggest that Panov and Zakhtei had ever touched the alleged stockpile.

With this entire story hinging on ‘confessions’, it was of critical importance that the lawyer Panov’s family had employed was prevented from seeing his client. At one stage they produced a scrap of paper, with a typed statement, allegedly from Panov, rejecting the lawyer’s services.  The paper was unsigned, and his family, by now seriously worried, were helped by a human rights group to apply to the European Court of Human Rights.  The latter demanded information from Russia regarding the origin of Panov’s bruises, etc. and confirmation that he had been allowed to see the lawyer his family had chosen.

Both Panov and Zakhtei were moved to Moscow shortly after that brief meeting between Panov and his lawyer, and put under heavy pressure to give up their independent lawyers.  They refused and were soon moved back to Crimea, and the Simferopol SIZO [remand unit] where the conditions are in themselves a form of torture.

The mounting pressure and threats of a much worse sentence if he didn’t comply finally prompted Zakhtei to agree to cooperate.  He pleaded ‘guilty’ and gave up his lawyer, yet a Russian-controlled court in Crimea still sentenced him on 16 February 2018 to 6.5 years imprisonment.  Suleymanov and Prysich had previously been convicted of charges that bore little or no resemblance to the crimes they had ‘confessed’ to.

Only Suleymanov, who was facing a short sentence, and whose family live in Crimea, did not openly speak of having been tortured.  Panov, Prysich and Zakhtei have all described the methods used to extract ‘confessions’ which they retracted as soon as they could.