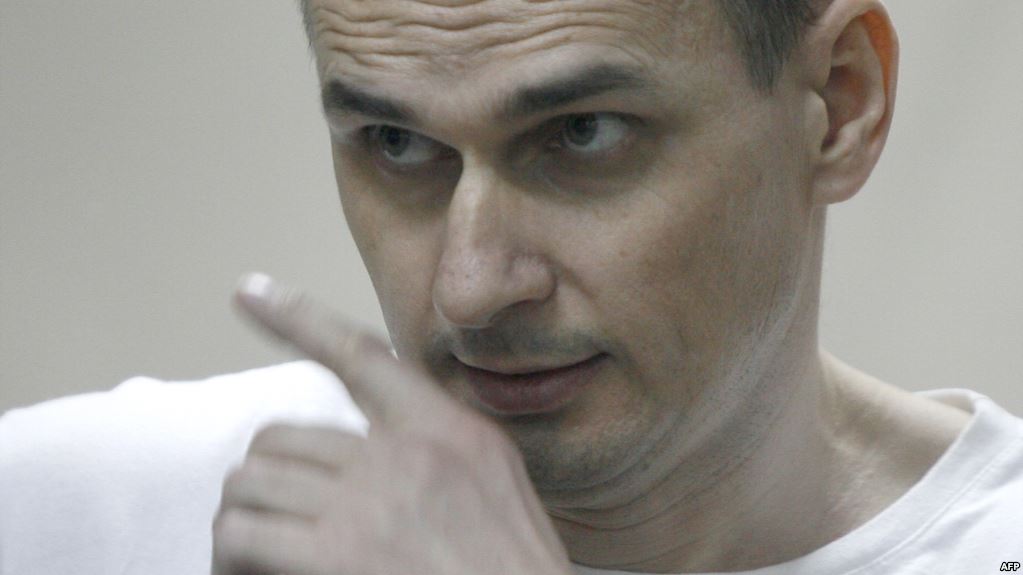 Ukrainian filmmaker Oleg Sentsov is turning 42 on 13 July.  It will be his fourth birthday in a Russian prison, and must be his last. The Kremlin’s most famous Ukrainian hostage has been on hunger strike since 14 May and has made it clear that he will not give up until Russia releases him and other Ukrainian political prisoners.

There is, therefore, only one possible birthday wish for Oleg Sentsov – freedom.  Civic activists have called on people throughout the world to join them in a flashmob to greet Oleg on his birthday.  Photos of him can be downloaded from here http://bit.do/epfmw.   They ask for these to be copied on A5 sheets and for people to hold them in front of monuments in each person’s country, with the resulting photos circulated, under the hashtag #SaveOlegSentsov, on the Internet.

Sentsov and all the other political prisoners have confirmed how important it is for them to know that they are not forgotten, and to receive letters.  It is also vital to make the Kremlin realize that the subject will not go away.

Politicians undoubtedly have more leverage here, and it is vital to try to persuade them – either directly or by promoting maximum media coverage – to lobby on behalf of Sentsov and the other prisoners.

Please write to your parliamentary representatives, explaining the urgency of the situation and how they can help.  Russia is using its formidable propaganda machine tp try to present acts of political persecution as legitimate methods of fighting, so-called ‘terrorism’, ‘sabotage’ or ‘extremism’.  It is vital that we expose the lies and present material that clearly and briefly demonstrates, for example, the lack of any evidence against Sentsov at all.

The following is a brief letter, including a summary of the ‘Sentsov case’, which can be  expanded or adapted for use with MPs, etc. and / or the media in your country.

I am writing to you as my representative to ask for your assistance in putting pressure on Russia to prevent the death of Oleg Sentsov, renowned Ukrainian filmmaker and recognized political prisoner.

As you may have heard, Sentsov has been on hunger strike since 14 May, with his one demand being the release of all Russia’s Ukrainian political prisoners, including, of course, himself.  Information about the other prisoners, held in Russia and occupied Crimea, can be found here .

Sentsov and Kolchenko were sentenced on August 25, 2015, with Sentsov convicted of ‘organizing a terrorist organisation’ (Article 205.4 § 1 of the Russian Criminal Code), and two episodes treated as ‘terrorist acts committed by an organized group’  (Article 205 § 2a).  He was sentenced, as the FSB had warned, to 20 years’ imprisonment, Kolchenko to 10 years.

Not only was there no real evidence against any of the men, but Afanasyev found the courage, when brought to the court to confirm his testimony against Sentsov and Kolchenko, instead retracted every word.  He stated clearly that all his testimony had been a lie, given under torture.   This was simply ignored by the Rostov Military Court whose judges provided the sentences required in a trial condemned by prominent Russian human rights activists as “absolutely Stalinist” and “ideologically motivated state terror” against opponents of Russia’s invasion and annexation of Crimea.

Sentsov and Kolchenko were soon declared political prisoners by the authoritative  Memorial Human Rights Centre, as, after his statement in court, was Afanasyev.  Sentsov is also an Amnesty International prisoner of conscience, and has received a number of awards from PEN America and other writers’ or human rights NGOs.  The list of international structures and democratic states who have demanded his release, and that of all the Kremlin’s Ukrainian hostages, is huge.

One method that would doubtless hurt President Putin, as well as the oligarchs and others who derive their power from him, would be to increase targeted sanctions and to introduce sanctions against the ‘prosecutors’, ‘judges’ and others who actively collaborated in the Sentsov case or in persecution against other Ukrainians.

It is important to also stress Russia’s extraordinary attempt to lie about Sentsov and Kolchenko’s nationality.  Both men are Ukrainian and have never signed any document justifying Russia’s claim that they also hold Russian citizenship.  As Sentsov famously stated: “I am no serf to be passed over together with the land”.  The Kremlin is using this ploy to deny Sentsov and Kolchenko their rights under Ukrainian and international law