Ukrainian jailed as ‘extremist’ in Russia for a Facebook post asking for tyresUkrainian abducted to Russia faces ‘trial’ for protest in Ukraine against Russian occupation of CrimeaRussia abducts Ukrainian soldier for new ‘Right Sector’ show trialRussia abducts activist from Ukraine, charges him with involvement in Ukrainian organizationUkrainian gets prison sentence in Russia for peaceful protest in UkraineRussians brutally tortured and sometimes killed Ukrainian civilians in village school in Kherson oblast Russian paramilitary wanted by Ukraine over role in annexation of Crimea could face 15-year sentence in Czech republic"Did the Chechens cut your heads? No? We will do it..."Abductions and feared mass grave of Russian invaders" victims in liberated Vysokopillia (Kherson oblast) Ukrainian volunteer asphyxiated, beaten and half-starved in Russian ‘filtration’ concentration campThe application practice of Article 391 of the Criminal Code of Ukraine proves that this Article should be canceledRussian invaders demand Ukrainians have ‘filtration’ stamps and permits to live in their own citiesRussian invaders use Mariupol supermarket to dump the bodies of their victims Russia invades Crimea and sentences Ukrainian academic to almost 20 years for ‘treason’Russian Rule of Lawlessness in Occupied Crimea and DonbasStand With Ukraine! Address to the International Community by Ukrainian Human Rights DefendersRussia claims it prevented a ‘Ukrainian radical terrorist attack’ in occupied Crimea Staged Donbas ‘evacuation’ and fake sabotage in Russia’s war against Ukraine. Where are the sanctions?Czech court to decide if armed Russian paramilitary awarded for his role in the invasion of Crimea is extradited to Ukraine Reform strategy of medical care for prisoners (updated)
• Topics / News from the CIS countries 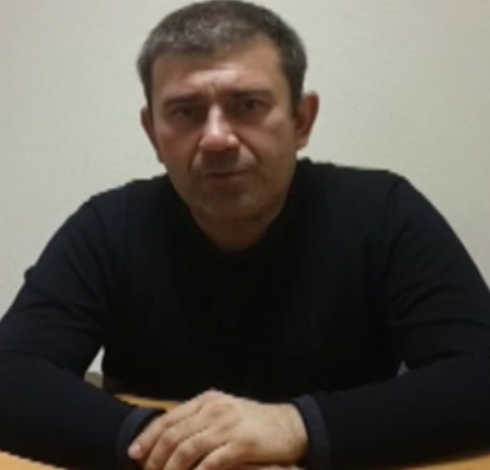 Roman Ternovsky has been sentenced by a court in Rostov on the Don to two and a half years’ imprisonment for taking part in what Russia calls ‘extremist activities’.  The charges, incredibly, pertain to Ternovsky’s involvement in his native Ukraine in Right Sector, an organization that is legal in Ukraine.

The ‘indictment’ against Ternovsky, posted on the official website of the Russian Prosecutor General’s Office does not even attempt to conceal the legal absurdity of this prosecution.   “According to the investigators, the man, an active member of the extremist organization Right Sector which was banned by a Russian Supreme Court ruling on the territory of Russia, took part from September 2015 to December 2016 in anti-Russian protests on the territory of Ukraine.”

Ternovsky went to Russia in December 2016 from where he is supposed to have posted on Facebook material “aimed at drawing attention to the extremist organization Right Sector”.

All of this was reported on Kremlin-loyal television channels, like NTV, with the nonsense about pickets and rallies in Ukraine claimed by an Investigative Committee spokesperson to “be directed against the interests of the Russian Federation.

The ‘court trial’ was in fact held back on 28 June, however information received from Ukraine’s consulate in Rostov was only reported on Grani.ru on 12 July.  42-year-old Ternovsky did not deny the charges and his case was therefore heard without the questioning of witnesses or examination of the ‘evidence’.  The ‘trial’ was also, for no obvious reason, held behind closed doors.  While admitting the charges, Ternovsky did dispute the sentence of two and a half years’ medium security prison, handed down by Lyudmila Yordanskaya of the Pervomaisk District Court, and has lodged an appeal.

As reported, Ternovsky was arrested in October 2017, with the only information coming from a surreal Investigative Committee post on 18 October.  This stated that Ternovsky had been detained in the Rostov oblast, and that “it has been established that as a member of Right Sector, he took part on many occasions in pickets, protests and other mass events on the territory of Ukraine”. He also used a Facebook page to carry out what the report calls ‘propaganda of Right Sector activities’, with this being available to “people permanently resident in the Russian Federation”.

Both written and audio text claim that “Ternovsky’s above-listed activities were directed against the interests of the Russian Federation and are classified by the investigators under Article  282 § 2 of Russia’s criminal code, namely participation in an ‘extremist organization’.  This carries a sentence ranging from a fine to a possible 6-year prison sentence.  The Investigative Committee states that during their search of Ternovsky’s home in Rostov, “items of clothing and other personal things were discovered with Right Sector symbols”.

Ternovsky was apparently living in Rostov with his common-law wife when arrested on 13 October 2017 and taken to Moscow.  Five days thus elapsed before any official acknowledgement that Ternovsky had been taken into custody, which is worth bearing in mind, given his ‘guilty’ plea, and the lack of any information to suggest that he had an independent lawyer.   Grani.ru reports that the Investigative Committee also posted a video with Ternovsky’s supposed ‘confession’, during which the latter stated that to be in Right Sector, you need “to have the qualities of a fascist, nationalist”.  It seems most unlikely that Ternovsky would have made such an assertion of his own free will.

The ‘investigator’ (V. Starichikhin) came up with a few more details, none of which can justify the charges, since the alleged propaganda activities for Right Sector during 2015 and 2016 took place “on the territory of the Kharkiv oblast” in Ukraine.

There appear to be some strange moments in the story of Ternovsky’s relations with Right Sector, but these do not in any way add or detract from the surreal nature of this prosecution and sentence.

Russia has persistently demonized Right Sector since early 2014, and in November that year it was declared an ‘extremist’ organization and banned in Russia.  The organization was at one stage second only to the ruling ‘United Russia’ party in the number of times it was mentioned in the Russian media, with this far exceeding its popularity or influence in Ukraine.   The most notorious aspect of Russia’s obsession with Right Sector was seen in the ‘trials’ of Ukrainian filmmaker Oleg Sentsov and three other opponents of Russia’s occupation of Crimea.  They were accused and convicted of ‘a Right Sector terrorist plot’, although there was no proof at all, and one of the men – Oleksandr Kolchenko – is a committed anarchist for whom Right Sector’s right-wing views are totally alien and unacceptable.

Russia has now ‘convicted’ two Ukrainians of involvement in Right Sector in Ukraine, with Mykola Dadey sentenced to 18 months’ imprisonment on 21 May 2018 and now Ternovsky’s two and a half-year sentence, which is under appeal.

The ‘trial’ is underway of Oleksandr Shumkov who was almost certainly abducted to Russia from Ukraine and who is also on hunger strike in solidarity with Oleg Sentsov (details here).

Russia has also seized Denis Bakholdin, a fierce critic of Russia’s aggression against Ukraine.  Bakholdin had been living in Ukraine since 2014, but unfortunately tried to visit his mother who was unwell, and is now facing the same charges over involvement in Right Sector in Ukraine (details here).

Dadey, Shumkov and Bakholdin have all been recognized as political prisoners by the renowned Memorial Human Rights Centre.