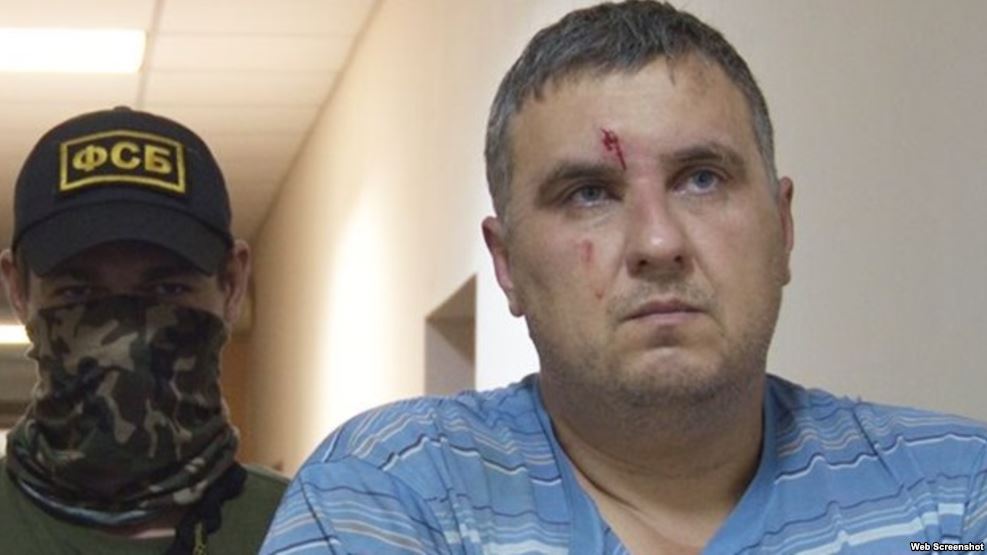 Yevhen Panov has been sentenced to eight years in Russian-occupied Crimea on ‘sabotage’ charges for which there is not a scrap of evidence.  The sentence, to be served in a maximum security prison, was met on 13 July with cries of “Glory to Ukraine” from Crimean Tatar and other Ukrainian activists who had come to show support, an act of no small courage under Russian occupation.

After being taken prisoner by the FSB [Russian security service] and widely showed on Russian propaganda channels ‘confessing’ to planned acts of sabotage in Russian-occupied Crimea, there was effectively no chance that Panov would be acquitted. However, the fact that he received a sentence so much higher than the other three men arrested was undoubtedly because he consistently highlighted the lack of any substance and the use of torture in Russia’s attempt at a ‘Crimean saboteur plot’.  Not only did Panov retract the ‘confession’ tortured out of him for Russian television, but he also maintained this refusal to collaborate in any way, despite the FSB stating quite unambiguously that this would significantly increase the sentence handed down and mean that he would be sent very far into Russia, and away from his family.  Such stubborn courage was most inconvenient for the FSB since this ‘case’ was so absurd that two of the other three men arrested were convicted of changes that were very different from what they had also been shown ‘confessing’ to.

There is nothing new to add about this case.  No new evidence was ever provided either that the alleged ‘sabotage’ had ever been planned and attempted, or that Panov had been involved.

The claims were especially suspicious given that the occupation regime had blocked independent Internet sites prior to the alleged events.

Although Russia’s leaders and state-controlled media made a lot of noise about how Ukraine had supposedly ‘encroached upon’ Ukrainian territory which Russia is illegally occupying, there was fairly open scepticism from the West.  It soon became evident that the story was based solely on videoed ‘confessions’ from four men, and a supposed ‘stockpile of weapons’ which could not be linked to Panov and Zakhtei.

Two of the men – Redvan Suleymanov; and Volodymyr Prysich - were eventually convicted of charges that bore little or no relation to these supposed confessions.  While Suleymanov remained reticent amount the motives for his ‘confession’, Prysich stated quite clearly that he had given the initial ‘confession for television’ under torture.

The first video shown widely on Russian television was of Panov’s ‘confession’ and the accusations against him.  It was all absurdly sloppy, and no pretence was made on this occasion to hide the obvious signs that Panov had been beaten.  Panov  ‘confessed’ to working for Ukrainian military intelligence, and having been recruited for a group formed to carry out acts of sabotage in Crimea.  He reeled off various names of people supposedly from Ukrainian intelligence.  Neither he, nor any of the other men, mentioned each other.

On August 12, Redvan Suleymanov also stated on a video broadcast on Russian TV that he had been recruited by Ukrainian military intelligence in October 2015.  He was supposed to find places to plant bombs in the Simferopol Airport and Bus Station, with the criteria being: the possibility of hiding them and of there being a large number of people around.

It should be noted that Suleymanov had been arrested earlier, when the FSB were clearly wavering about their ‘plot’.  The young Crimean Tatar’s ‘confession’ coincided, for example, with claims that Ukraine was planning “new sabotage” under the guise of acts of resistance by Crimean Tatars.

On August 22, 2016, in a report on Russian TV claiming that the so-called ‘sabotage in Crimea’ had been planned at a very high level, the confession was broadcast of Volodymyr Prysich, a truck driver from Kharkiv.  On the video, he said that he had been recruited by Ukrainian military intelligence and had made at least eight reconnaissance trips to Crimea.

In court Prysich denied all charges.  He said that he had been seized by masked men in Sevastopol at around 11.30 a.m. on August 13, 2016, and taken to a building for ‘questioning’ with the use of electric shocks depending on his ‘answer’.

Suleymanov was sentenced on August 10, 2017 to 1 year and 8 months imprisonment, on a charge which was vastly removed from the accusations of involvement in what Russia claimed was ‘Ukrainian state terrorism”.

Panov is from Enerhodar in Zaporizhya oblast and worked as a driver for the Zaporizhya Nuclear Power Plant.  It is likely that he was targeted by the FSB from the outset, and tricked into coming to Crimea, in order, to thought, to evacuate a family in danger of persecution.

There was no question that Panov would have otherwise tried to enter Crimea.  In 2014 he had been active in preventing Russia from pulling off events similar to those in Donbas in the Zaporizhya oblast, and had later been a volunteer for the Ukrainian Armed Services.

Zakhtei was working as a taxi driver in Crimea, and had also received a call to come and supposedly collect a client.

A lot to hide

Panov and Zakhtei were effectively held incommunicado for two months, with the lawyer Panov’s family had employed actively prevented from seeing his client.  At one stage, a scrap of paper was produced, with a typed statement, allegedly from Panov, rejecting the lawyer’s services.  The paper was unsigned, and his family, by now seriously worried, were helped by a human rights group to apply to the European Court of Human Rights.  The latter demanded information from Russia regarding the origin of Panov’s bruises, etc. and confirmation that he had been allowed to see the lawyer his family had chosen.

The mounting pressure and threats of a much worse sentence if he didn’t comply finally prompted Zakhtei to agree to cooperate, though not to give testimony against Panov.  He pleaded ‘guilty’ and gave up his lawyer, yet a Russian-controlled court in Crimea still sentenced him on 16 February 2018 to 6.5 years imprisonment.

There were initial attempts to have the ‘trial’ held behind closed doors, however these were resisted by Dmitry Dinze, the lawyer who first represented Ukrainian filmmaker Oleg Sentsov.  Dinze was also asked to sign a non-disclosure undertaking, but refused on the grounds that there are no state secrets involved.

There was no evidence to substantiate these charges, and the alleged ‘stockpile’, as mentioned, contained no DNA or fingerprints to link it with either Panov or Zakhtei.

Yet, as anticipated, ‘judge’ Andrei Paly, a Russian from Kaliningrad, now working for the Crimean High Court under occupation, passed the guilty verdict required of him.

Judging by all other political cases, Russia will likely send Panov thousands of kilometres away from his home and family.   For the moment, however, he will remain imprisoned in Crimea since the sentence will assuredly be appealed.