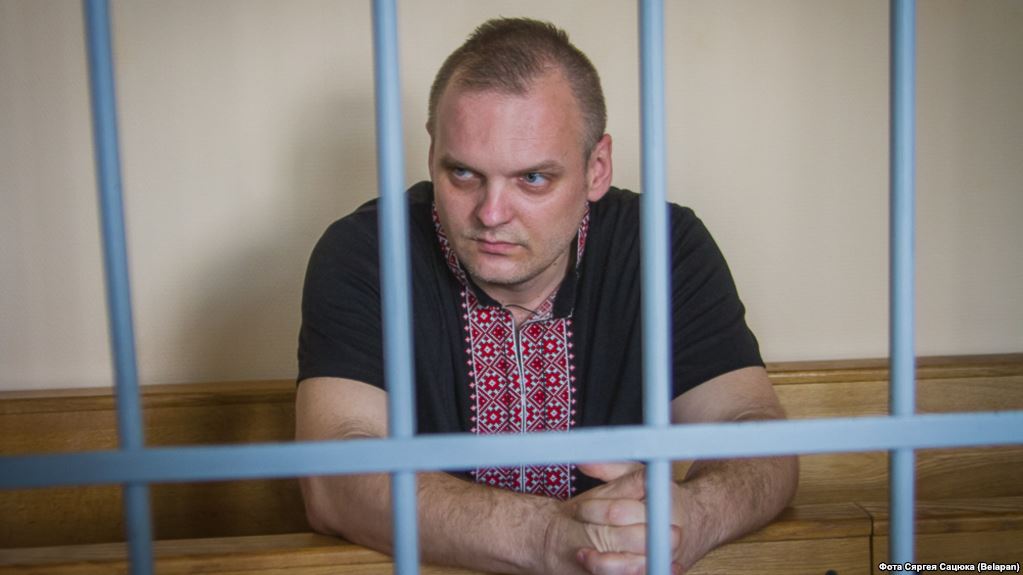 Journalist and blogger Dzmiter Halko has been sentenced by a Belarusian court to four years compulsory labour in a low-security prison after a trial condemned by media watchdogs.  He was charged with ‘attacking a policeman’ although he had only tried to remove officers who burst into the flat without any court order and began videoing his son and son’s friends..  The 38-year-old Ukrainian and Belarusian journalist had been in custody since being arrested on 22 April after trying to enter Belarus from Ukraine where he has been living for the last four years, with his partner and their two-year-old son.  He was released in court after the verdict on 17 July, and has 10 days to lodge an appeal.

Halko expressed anger over the ruling and not over because, as he put it, the only just verdict in this politically motivated prosecution would have been an acquittal.  The prosecutor had demanded a three-year prison sentence in a medium security prison, and Halko believes that the longer sentence in the highly specific, but very low security form of imprisonment often referred to as ‘Khimiya’ is aimed at deflecting international attention from his case.

“They have calculated that if I go to ‘Khimiya’, everybody will forget about this case. After all, what’s ‘Khimiya’?  A person is supposedly almost free, he lives there and works”.

He will, of course, not be free and doubtless unable to see his youngest son at all, or help provide for his children.

Halko is convinced that the judge did not take even a moment to really consider the case which was just full of contradictions.  The political nature of the trial, he believes, was seen even during the trial in the way the police officers referred to him, using either a term clearly aimed at insultingly referring to him as a ‘Ukrainian nationalist’, or talking about him as an opposition activist.

The incident over which Halko was prosecuted occurred on 25 November 2017 during a birthday party to celebrate his son Jan’s 15th birthday.  The officers who appeared, including Yuri Chirkov, claimed that they had been called by neighbours due to the noise of the partying.  This, it transpired in court, was untrue. After an altercation, Halko and his son were taken, in handcuffs, to the police station.

At the time Halko only faced administrative proceedings for using foul language (which he acknowledged).  He himself considered that the entire police visitation was linked with his professional activities.

Although there were suggestions in the media that the authorities were planning criminal charges, there had been no police summons or any other indication that Halko was, as is claimed, on the wanted list.  He had travelled between Ukraine and Belarus many times, and had never tried to conceal his critical attitude to the Lukashenko regime.  He now realizes that he was naïve in thinking that he could return to Belarus without problems.  Nikolai Halko believes that the criminal proceedings are in revenge for his son having written critical comments about the police on Facebook.

The trial began on 10 July and there were indeed multiple contradictions.  Chirkov, who had asserted in November that Halko had hit him, knocking him to the ground, stated in court that he had not been knocked to the floor, but that he himself had forced Jan Halko to lie on the floor.  He did, however claim that Halko had caused him and his phone damage, and demanded one thousand Belarusian roubles compensation. In fact, his partner said in court that he hadn’t seen him being hit, while another officer who appeared as witness, had earlier said he saw him hit on the back of the head, and then in court, said he was hit on the face.

Halko had earlier only denied guilt, but refused to answer any questions.  He did, however, describe what had happened that evening during the court hearing on 13 July, with his account very different from that presented by the officers.

The officers had had no reason for being in the flat, yet stayed for an hour, videoing those present and waiting for police reinforcements.  They had not shown any documents, nor identified themselves, Halko said in court.  After they said that neighbours had complained about the noise, he had agreed to turn it down.  “Then Chirkov elbowed me aside and walked into the flat, with the others behind him”, Halko explained.

Chirkov had claimed that they suspected that there could be a drug den, or a pornography studio in the flat.  Halko had been angered by the suggestion and had sharply, “though not yet rudely”, asked the police to leave.  Instead, they began inspecting the flat, though they had no court order, and Chirkov began videoing the young teenagers present on his mobile phone. It was at this point, Halko says, that he grabbed Chirkov by his jacket and led him out of the room.  He does not remember having knocked his mobile, and certainly denies any suggestion that this constituted an attack.  His lawyer, Natalya Matskevich also pointed out in court that the police officers had unlawfully burst into the flat and begun taking a video. You could not apply the article about attacking police officers in such a situation.

The judge who passed sentence, Alexander Yakunchikhin, is reportedly known for his part in several political trials.

There had been calls before this verdict for Halko’s release from the Committee to Protect Journalists and Reporters without Borders.  Johann Bihr, the head of RSF’S Eastern Europe desk, said that his prosecution bore “the hallmarks of an act of revenge”.

Halko has worked in Belarus for the now banned Belarusian Partisan and Economic News.  He took part in Euromaidan and over the last four years has provided coverage of the Russian-backed military conflict in eastern Ukraine, working as a fixer for Kyiv Post, the UK’s Times and other publications.