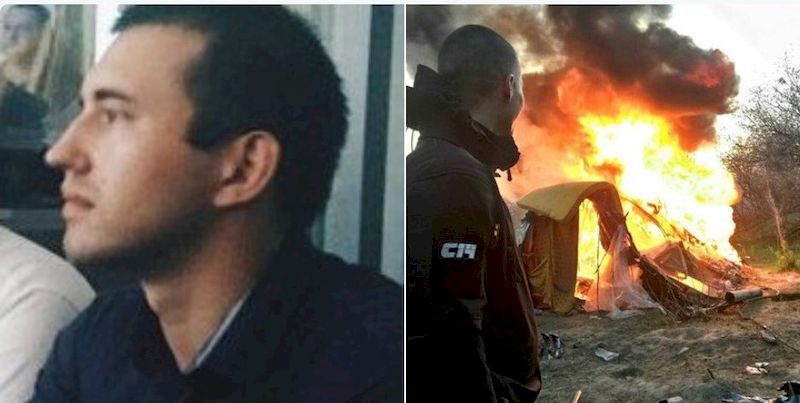 Serhiy Mazur, the far-right C14 activist who boasted on Facebook in veiled terms about an attack on a Roma camp in Kyiv during which young children could be seen fleeing in terror has been placed under 24-hour house arrest for the next two months.  Other suspected participants in the attack are currently being questioned and other arrests seem likely.

Hromadske Radio was told by Mazur’s lawyer Dmytro Bilovchuk that his client is charged with ‘hooliganism, i.e. flagrant infringement of public order motivated by open disrespect for society, accompanied by particular arrogance or exceptional cynicism and carried out by a group of individuals with the use of an object for causing bodily injury’  (Article 296 § 4).  This carries a prison sentence of between three and seven years.

Inciting enmity (under Article 161 of Ukraine’s Criminal Code) is part of the case generally, but does not, for the moment, form part of the charges against Mazur. The original report that criminal proceedings had been initiated, as well as the protocol of the hearing, mentioned that this was a criminal investigation into “violation of equality of citizens based on their racial or ethnic origin" (part of the same Article 161).

Mazur asserted in court that the police had no grounds to accuse him of having been carrying a knife during the events on Lysa Hora and of having shouted “death to the gypsy race”.  He claimed that the case was “politically motivated to show that in Ukraine they fight neo-Nazis, racists and xenophobes” and an attempt to isolate him from public life.   His lawyer is planning to lodge an appeal against the house arrest.

A search was carried out of Mazur’s home on 10 July.

Although there is video evidence that there was a violent attack on a Roma camp, and there are Mazur’s own posts about the events, members of C14 and other far-right groups have all expressed outrage, claiming that fabricated charges are being pinned on him.  This is the line also taken by Ihor Lutsenko, one of the two MPs who offered to act as guarantors to prevent detention or house arrest.  In a rather disturbing Facebook post, Lutsenko presents Mazur generally as an activist “defending the right of Kyiv residents to nature and cultural heritage”, etc.  He labels the media and activists who see Mazur and C14’s activities very differently “our internal enemies” who “receive grants from foreign neo-Marxist funds”.

In Lutsenko’s rendition,  “C14 and other activists went to save the Holosyiv National nature park in the capital from the latest attack by one particular ‘gy…. groups” which he claims cut down trees in the park every year, throw toxic waste around and are aggressive to any who criticize them.

The events at Lysa Hora on 21 April 2018 were the first of at least five attacks on Roma camps over recent months with the latest, on 23 June, leaving one young Roma man dead and three people, including a child, injured.

Mazur wrote a Facebook post on 19 April claiming that the Roma “have occupied Lysa Hora”, and that there are more Roma this time and more “of their rubbish”.

Together with representatives of the Holosiyiv administration, he said, they had “presented an ultimatum to leave the prohibited territory of the park by TOMORROW.

Absolutely none of this was within the framework of the law, and the hate speech used was disturbing from an organization that claimed to be working in cooperation with the local authorities.

On 21 April, Mazur stated in a post that there were no longer any Roma (not the term he uses) on Lysa Hora.  His euphemistic terms are downright sinister.

“Yesterday they did not carry out the demand, and only some left the camp in the park.  However after convincing lawful arguments, the others also decided to leave the prohibited territory.“

The C14 activists then “cleaned up almost all the rubbish” and burned the tents.

Over the next 3-4 days, up till early on 25 April, the Kyiv Police consistently denied having received any reports of violence or beatings from the Roma residents of the camp.

Then LB.ua made public video footage and witness accounts of the violence used. The video showed families running in terror from young men, many in masks, hurling stones and spraying gas canisters in the direction where families with some very small children were trying to take shelter.  One Roma man tried to hold a thin branch in defence, but clearly understood that he was outnumbered and also retreated.

Shouts could be heard for the police to help, and one witness told LB.ua that the police had been called.

By evening on 25 April, the police reported that “criminal proceedings have been initiated over the publication of a videoed attack on Roma”.  The investigation is under Article 161 of Ukraine’s Criminal Code (violating citizens’ equal rights on the grounds of racial or ethnic identity, religion etc.), as well as Article 296 – hooliganism.  They called for witnesses to the events.

C14 members object to being called ‘neo-Nazi’, however researchers following far-right groups, like Anna Hrytsenko, Anton Shekhovtsov and Vyacheslav Likhachev are clear that the group fits this description because of their hate crimes and the neo-Nazi symbols they use.

This has raised concern over the reported cooperation between C14 activists and the Holosyiv District Administration, as well as in connection with the grants they recently received from the Ministry for Youth and Sport.

The reasons to be alarmed about any cooperation between C14 and local administrations and / or the police are listed here.  C14 activists claim to be ‘nationalists’ defending Ukraine against ‘separatists’, ‘titushki’ or paid thugs, corrupt courts, etc.  Their view of who is ‘separatist’ is highly specific and open to doubt, and their effective offer to act as titushki themselves for their ‘donors’ a matter of immense concern.  Regardless of C14’s public denial of their neo-Nazi views, they have a long track record of very aggressively demonstrating intolerance towards people whose race, religious or political views, or sexual orientation are not to their liking.