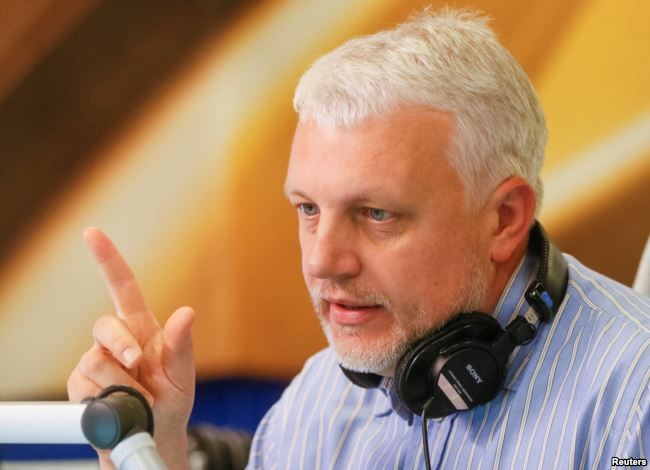 Dozens of people have commemorated journalist Pavel Sheremet on the second anniversary of his killing in a car-bomb blast in central Kyiv.

Journalists, rights defenders, civil society activists, U.S. diplomats, friends, and colleagues placed flowers at a makeshift memorial at the busy intersection in Kyiv where Sheremet was killed on July 20.

Sheremet, a Belarusian-born Russian citizen who had made Kyiv his permanent home, was leaving the apartment he shared with his partner, Olena Prytula, and driving to the studio where he hosted a morning radio program when an improvised explosive device planted under the Subaru the couple shared exploded at 7:45 a.m. on July 20, 2016. He was 44.

The attack was condemned by Ukrainian officials, who promised to find those responsible for Sheremet's death, but nobody has been arrested and no police leads have been made public.

Ukrainian authorities made no public statements on the anniversary. Officials from the Interior Ministry, National Police, and President Petro Poroshenko's administration either could not be reached by RFE/RL for comment or declined to comment when asked whether there had been any new developments in the case.

In a pithy and accusatory text message to Sevhil Musayeva, the editor in chief of the independent Ukrainian news site Ukrayinska Pravda and a close friend of Sheremet before his death, Interior Minister Arsen Avakov said investigators weren't working with the intention of pleasing journalists by solving the case on a notable day, such as the anniversary of the killing.

"Stop speculating. [You're] dividing the country with [your] statements," Avakov wrote in the message, which was seen by RFE/RL.

Musayeva said she was "disappointed" and "can't believe that after two years we still have no results" in the case. It is terrifying to know that Sheremet's killers are still out there somewhere, she added.

Marie Yovanovitch, the U.S. ambassador to Ukraine, laid a bouquet of white flowers at the site of Sheremet's death. She told RFE/RL in a brief interview that it was very important that the authorities renew their investigation into what happened two years ago.

"I think the Ukrainian people deserve to know the truth about what happened," she said. "[Sheremet] played an immensely important role here in Ukraine, in terms of finding out what was happening and presenting it to the Ukrainian people so that they could make their own decisions about the situation in Ukraine. That's a really important role in democracy, and he played his part in bringing about the changes that we see here today."

Yovanovitch also remarked on the chilling effect Sheremet's death has had on the journalist community in Ukraine.

"We've certainly heard from some of our friends in the journalist community that they feel under greater pressure, and I think, again, it is the role of a government to create an environment where journalists can pursue their profession, which is absolutely essential in any democracy to report honestly, objectively, clearly, without fear or favor, so that the Ukrainian people, in this case, can make up their own minds about how they want to move forward," she said.

Poroshenko said in July 2016 that it was a "matter of honor" that Sheremet's case be promptly solved.

At a meeting with members of Sheremet's family and the Committee to Protect Journalists (CPJ) in Kyiv nearly a year later, when it had not been solved, Poroshenko proposed incorporating an internationally recognized investigatorinto the Ukrainian team investigating the case in hopes of jump-starting it.

He said he would "happily accept" a "professional, trustworthy" investigator, such as someone "from the FBI or Scotland Yard" to oversee the high-profile case "if it is agreed by the family."

That proposal has not been implemented, and Poroshenko's administration did not answer RFE/RL's questions about the matter.

Sheremet, who was honored by the CPJ with the International Press Freedom Award in 1998, was well-known as a hard-hitting reporter and commentator who had worked at prominent media outlets in Belarus, Russia, and Ukraine during his decades-long career.

Often critical of political leaders, he had received threats and been harassed on several occasions. His Belarusian cameraman Dzmitry Zavadski was abducted and killed in 2000 after the two returned from a reporting trip in Russia's Chechnya region.

Sheremet was stripped of his Belarusian citizenship in 2010 while he was living in Russia, where he had moved in 1997 to avoid persecution following his reports criticizing Belarusian President Alyaksandr Lukashenka's government.

With reporting by RFE/RL's Ukrainian Service