‘Preliminary’ terrorization of civic activists and lawyers in occupied Crimea 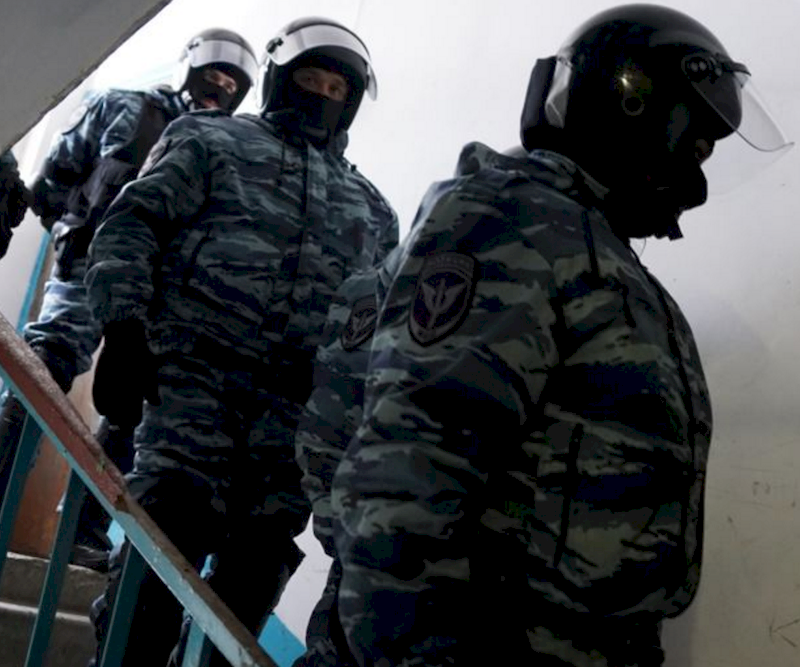 An armed search on 19 July and attempted interrogation of the 21-year-old daughter of a recognized Crimean Tatar political prisoner left the family, and especially Gulsum Alieva’s 9-year-old brother Seidali deeply traumatized. That seems to have been the sole aim of the operation since Gulsum was not presented with any charges, and the sole pretext given was a text she had merely reposted on Facebook.  Gulsum has been active in the Crimean Solidarity civic initiative, which supports political prisoners and other victims of repression, since her father Muslim Aliev’s arrest in February 2016  (See: They terrorize children in Russian-occupied Crimea.)

Gulsum Alieva is the latest of a number of Crimean civic activists and lawyers who are facing so-called ‘pre-criminal investigation checks’.  These can drag on for a year or more, and may, or may not, end in an actual prosecution.  Journalist Taras Ibragimov has spoken with two prominent lawyers, representing political prisoners, both of whom have been informed of at least one such ‘check’.

Crimean Tatar human rights lawyer Emil Kurbedinov was phoned by a Russian Investigative Committee investigator in March 2017 and told that such a ‘preliminary check’ was underway over possible ‘divulgence of certain data from a criminal investigation’.

Kurbedinov is quite clear that the ‘check’ is linked with his work and with his many public addresses on the situation in Crimea.  Two months earlier, on 26 January 2016, he had been detained, and his home searched.  He was then sentenced, by a Russian-controlled ‘court’’ to a ten-day term of imprisonment, supposedly over a video he had posted, quite legally, back in 2013.

There have been two ‘preliminary checks’ against Polozov.  One was in October 2016 when Alexander Dombrovsky, de facto prosecutor in the ‘trial’ of Crimean Tatar leader and political prisoner Akhtem Chiygoz objected to how Polozov had referred to him in a Facebook post.  The ‘check’ was essentially whether Polozov could face criminal charges over this under three articles of Russia’s criminal code: ‘obstruction of justice’; ‘contempt of court’ and ‘insulting a representative of the authorities’.  Polozov’s comprehensive account of each ‘court hearing’ in the fundamentally flawed ‘trial’ of Chiygoz was an invaluable source of information about Russia’s most openly anti-Crimean Tatar case, and provided vital argumentation for imposing sanctions on those implicated in his prosecution.   This ‘check’ was finally terminated after Chiygoz was sentenced to eight years’ imprisonment on absurd charges regarding a demonstration over which Russia had no jurisdiction.

The second ‘check’ was initiated by FSB ‘investigator’ Igor Skripka who was behind the attempt to interrogate Polozov as a ‘witness’ in the Umerov trial in order to prevent him from acting as Umerov’s lawyer.  Skripka claimed that Polozov had ‘divulged data from the criminal investigation’.

Polozov calls such checks the kind of pressure used when they don’t have permission for a fully-fledged prosecution, but want to try “to tame and control” a person.  The potential prosecution hangs over the person like the sword of Damocles, he says.

One of the aims of such ‘checks’ is often to force Ukrainians to leave Crimea.  In June 2017, Natalya Kharchenko, a blogger and the mother of two small children, left with her family after understanding that she was likely to become the latest Ukrainian to be charged with ‘separatism’ for her pro-Ukrainian position.

Both Kharchenko and her husband, Ivan Vinohradov were members of the Ukrainian Cultural Centre in Simferopol and had never concealed their ‘pro-Ukrainian views’.

The first sign of the trouble looming came with an illegal FSB search of their home on January 12, 2017, under the guise of an ‘inspection’.  Both parents were originally taken away, Kharchenko subjected to a four-hour interrogation, at which her lawyer, Edem Semedlyaev, was prevented from being present.

This ‘preliminary check’ was also over a posted photo on the society network VKontakte. This showed Kharchenko in camouflage gear with a Ukrainian flag, against Crimean landscapes.

Vinohradov later reported that both he and his mother-in-law had lost their jobs after the detention, and that he had received an open hint that it would be better for them to leave Crimea.

After Kharchenko was summoned for questioning four times, the family did leave.

Even a cursory overview of prosecutions under Russian occupation makes it abundantly clear that the lack of any crime or offence in the activities which face such ‘checks’, would not stop a person receiving a real or suspended sentence.

This is the reason that two other Ukrainian Cultural Centre activists Leonid Kuzmin and Veldar Shukurdzhiyev have been driven out of Crimea through the threat of prosecution.

There are variations on this scenario.  Ibragimov cites the experience of Crimean Tatar activist Seitumer Seitumerov who was purportedly treated as a ‘witness’ in a criminal case.  After his home was subjected to a so-called ‘inspection’ by the FSB, Seitumerov decided not to wait until they decided to come up with charges against him and left for mainland Ukraine.

As reported, this was similar to the situation with Akhmet Mustafaev, the driver for veteran Crimean Tatar leader Mustafa Dzhemilev’s family. Although officially only a ‘witness’ in a bizarre case that seems aimed at trying to discredit Crimean Tatar leaders and the Mejlis [representative assembly, the torture Mustafaev was subjected to in an attempt to get him to testify against Mustafa Dzhemilev left him with no illusions as to what he would face in Crimea if he remained.

The list can be continued, with several Ukrainians, including Crimean Tatar human rights activist Emir-Usein Kuku, Volodymyr Balukh and others having initially faced numerous administrative prosecutions, an attempted abduction (in Kuku’s case) and harassment before criminal charges were brought with the aim clearly to imprison them for a long time.