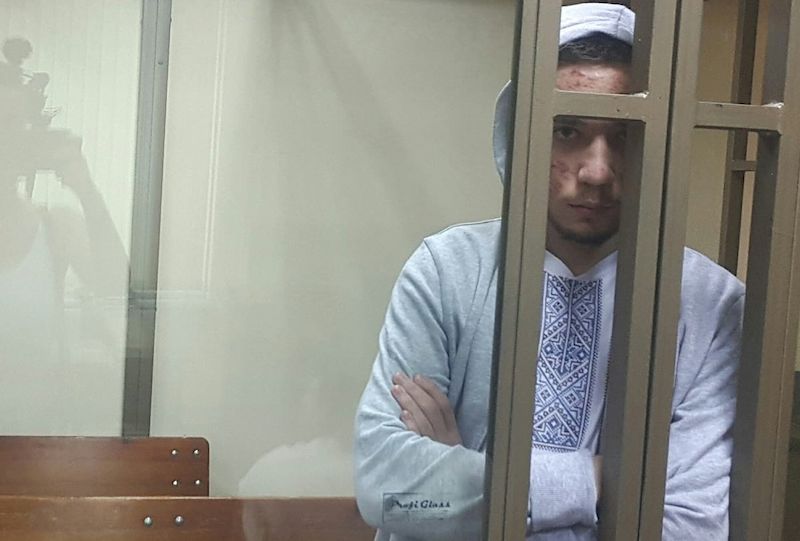 Russia’s ‘trial’ of Pavlo Hryb, a Ukrainian student abducted by the FSB from Belarus, began in Rostov on 23 July 2018, only to be adjourned for the prosecutor to correct a critical mistake in the indictment.  Hryb’s detention was extended to 22 October, despite the 20-year-old’s life-threatening blood circulation illness, which could lead to fatal haemorrhaging at any time.  The situation is of particular concern since there is reason to fear that Hryb is also facing physical harassment from other prisoners.  This could be part of the intense pressure on the young man since August 2017, aimed at forcing out a ‘confession’ to the surreal charges laid, and avoiding details of his abduction from another country being revealed in open court.

The pressure has thus far not worked, and during the brief hearing at the North Caucuses District Court in Rostov, Hryb denied the charges against him.  The indictment took the prosecutor all of six minutes to read out, with nothing of substance added to the woolly claims against the then teenager over correspondence with a Russian schoolgirl.  The only new information was that the prosecution is claiming that Hryb “acted under pressure” from somebody identified as Stefan Kapinos, whom he first met in 2013.

The prosecution is literally over communications between Pavlo, then a 19-year-old first-year university student and Tatyana Yershovaya, a 17-year-old Russian schoolgirl from Sochi.  The indictment mentions communication by Skype during which Tatyana allegedly complained that she didn’t like her teachers and the other kids in the school, or Russians generally.  The prosecution asserts that Hryb encouraged her to plant a homemade explosive device and set this off during a school assembly, and that she  supposedly wanted to do this. End of story, since nothing was ever done.

The Skype conversation allegedly took place between March 27 and April 13, 2017.  Yevhenia Zakrevska, the Ukrainian lawyer representing Hryb at the European Court of Human Rights, does not know of any record of the Skype conversation, but she has seen all later correspondence between the two adolescents who believed themselves to be in love.  From a month after the alleged mention of a plan to commit an act of terrorism, there was not one word about it.  Not before the date allegedly chosen, not on the day, nor afterwards.  Nothing at all to back the FSB’s claim.

The FSB themselves, who claim to have discovered this plan, did not say or do anything.  Yet on July 4, they allegedly launched a criminal investigation, with this involving a search of the young Russian girl’s flat.   By July 28, the FSB had designated Hryb as the ‘accused’ in this story, and they then set about intimidating the young girl (and her mother) into persuading Pavlo to meet her in Belarus.

The meeting was, unfortunately, arranged for August 24, 2017 in Gomel, Belarus, after which Pavlo vanished.  His father, Ihor Hryb understood swiftly that something was wrong and set off in search.  The coach driver confirmed that Pavlo had entered Belarus without any problem.  This is of major importance since Ihor Hryb saw on a tablet screen, while talking to the Belarusian border guards, something suggesting that his son was on a ‘wanted list’.

Had he been on an international wanted list, then he would have been stopped on the Ukrainian-Belarusian border, with the Ukrainian authorities informed.  Instead he passed into Belarus with no difficulty, and was, he later told his lawyer, seized by unidentified individuals who pushed him into a car.

Pavlo Hryb could not have been taken from Belarus into Russia without the Belarusian side being at least aware what was happening.  There is simply no possibility that the young man, who has openly expressed his views about Russian aggression and whose father was working for the Chaplain Service of the Ukrainian Armed Forces, would have voluntarily entered Russia.

It was only on September 13, 2017 that Russia officially admitted that Hryb was in their custody, although it later transpired that a court in Krasnodar had issued an arrest warrant back on August 17.

Russia is now claiming that Pavlo was ‘arrested’ in Russia’s Smolensk on August 25.

It is likely that the delay in revealing his whereabouts was so that the FSB could try to force a ‘confession’ out of the young man to the quite incredible charge of incitement to commit a terrorist act, under Article 205 § 1 of Russia’s criminal code.

In court on 23 July, both Hryb and his lawyer Marina Dubrovina stated that there had been serious violations during the ‘investigation’ which should prevent the trial from continuing.

Instead, the court, under presiding judge Sergei Mikhailovich Gorelov only returned the case to the prosecutor because an old version of the article of the criminal code had been cited, though the new one (carrying a sentence of 10 years’ imprisonment) had been in force.

Ukrainian journalist Iryna Romaliyska reports Russian media claims that the investigators believe Hryb is a supporter of the Ukrainian nationalist organization UNA-UNSO.  Russia has used all prosecutions of Ukrainians since 2014 for propaganda, with it standard that they are accused of involvement either in Right Sector or UNA-UNSO.

Russia has, once again, flouted the order from the European Court of Human Rights to allow Hryb to be examined by Ukrainian doctors, including the specialist who has treated Pavlo since early childhood.

It is quite possible that the FSB did not know about Pavlo’s state of health when they illicitly reading the correspondence of two infatuated teenagers.  They do now, yet are ignoring the grave risk to his life they are posing by holding him in a stuffy cell and preventing him from receiving vital medication.  Psychological pressure on the young man has, in general, been intense, with even the food products and money transfers for buying basic items in the prison stop having been blocked.

It is important to stress that none of this concerns luxury items.  It is critical that Pavlo receives cleaner drinking water and healthier food than the prison provides because of his medical condition. His father explains that any build-up of acid in the stomach increases the danger of haemorrhaging, which would occur in conditions where literally nobody was competent to help the young man.

Russia has ignored Strasbourg and is effectively falsifying the medical records in order to not acknowledge a problem, with this directly placing the young man’s life in jeopardy.

Russia will hopefully begin passing on letters now that the ‘trial’ is beginning, and even if it doesn’t, letters also send an important message to Russia that its treatment of the young Ukrainian is under international scrutiny.