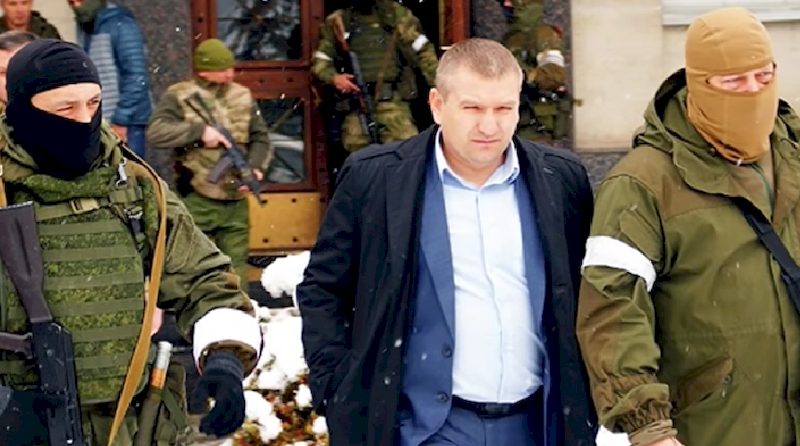 Vitaly Podobry has been held prisoner in an LPR basement dungeon since soon after he backed the eventual loser in the dramatic battle for power in November 2017.  Back then, Igor Plotnitsky, LPR leader since 2014, found himself confronted by a major revolt after he tried to sack the so-called ‘interior minister’, Igor Kornet.  Fighters without insignia appeared on the streets, in an echo of Russia’s invasion of Crimea, although this time they were probably militants from the Russian-controlled ‘Donetsk people’s republic’, rather than Russian soldiers.  Whatever was going on, it became clear fairly rapidly that Russia was supporting the Kornet camp against Plotnitsky, who soon ‘resigned’ and was spotted flying to Moscow.  There have since been numerous reports that Plotnitsky is in detention, including one in February 2018 from Vladlen Zaruba, a former associate of the first ‘LPR leader’ Valery Bolotov (who died in Russia following his replacement with Plotnitsky).

Podobry is a former Berkut special forces officer who was deployed against Maidan activists during Euromaidan and, according to the video produced by his comrades, was injured .  He sided with the Russian-backed militants in the Spring of 2014, took part in the fighting, and later became the so-called ‘LPR deputy interior minister’.  His comrades assert that he was an “implacable fighter against corruption and was in charge of specifically such operations within the ‘LPR interior ministry’.

He clearly sided with Plotnitsky in the autumn of 2017 and was appointed ‘prosecutor general’ in October..  The ‘prosecutor general’s office’ was the only ‘LPR structure’ that was still under Plotnitsky’s control.  Plotnitsky lost, and so did Podobry, who was seen being taken away by armed men without insignia.  It is only now, following the publication of the video produced by his ‘comrades’, that it becomes a little clearer what happened to him.

The video claims that Podobry is accused of abducting people and holding them hostage.  The charges are difficult to take seriously given the large number of Ukrainians whom the militants have been holding hostage over many months, or even years.

In Podobry’s case, they pertain to his actions when they were expecting the ‘prosecutor general’s office’ to be stormed, and he handed out weapons to employees.  His friends claim that these former employees gave false testimony against Podobry out of fear of persecution by the so-called ‘ministry of state security’.

Their video ends in great pathos about their heroic friend, whose fate has clearly not caused them to stop believing in the so-called ‘Russian world’ narrative used to persuade many former Berkut officers and others to support Russia’s proxy ‘republics’ in Donbas.

Podobry is by no means the only person holding office in the so-called ‘republics’ who has himself ended up imprisoned in the basements where well over 100 Ukrainian PoWs and civilian hostages are held.

Russian journalist and DPR propagandist Roman Manekin disappeared  on September 28, 2017, after strong criticism of at least one of the DPR leaders. There were also reports that the reason for his disappearance lay in his denial of the official militant line on the killing of Russian warlord Arseny Pavlov, more notorious as ‘Motorola’.  The militants and Russia have treated this mercenary whom Ukraine wanted to see tried for war crimes as a ‘hero’ and claimed that it was a ‘Ukrainian group of saboteurs’ who killed him.

The same report, citing a former ‘DPR minister’ Alexei Krasilnikov, now in hiding in Russia, said that Manekin wrote that he had a list of 300 Russians held prisoner by the ‘DPR’ as well as the name of the real killers of ‘Motorola’ who were certainly not ‘Ukrainian saboteurs’.

It was initially believed that Manekin had probably also been killed, however he was eventually released, having been held prisoner by the militants and, seemingly, tortured.

Although there are no longer the open executions seen under Stalin, whom many of the Russian and pro-Russian militants so admire, a fairly large number of militant leaders in both Russian-controlled ‘republics’ have died under suspicious circumstances. Although it is standard for Russia and the militants to accuse Ukraine’s military or security service in being behind the deaths, it is very often the case that Ukraine’s government has least reason to want the men dead, and therefore unable to eventually testify to the International Criminal Court about events in Donbas, and Russian aggression.