Poland’s right-wing government poised to seize more control of the judiciary than Yanukovych achieved in UkraineMenacing attack on Independent Polish TV channel as ruling party set to gain control over judiciaryUkrainian Open Dialogue activist deported from Poland after criticizing right-wing governmentPoland’s Government uses ‘Public TV’ as a propaganda tool to win the elections. Will the EU react?Politicized Polish judicial body illegally rubberstamps unfair presidential electionsDictatorship law that could force Poland out of the EU brings thousands out in protestEU silent while Poland seeks criminal prosecution of judge defending independent judiciaryPoland’s PiS government pushes through illegal elections by post to retain power amid Covid-19 pandemicRussians name Stalin as the most ‘outstanding’ figure of all times Comparing Stalin to Hitler could soon get you prosecuted in Russia, saying they both invaded Poland already hasExpert opinion (Amicus Curiae) on the application and interpretation of the case-law of the European Court of Human Rights in criminal proceeding № 52017000000000361Putin’s law aims to educate ‘patriots of Russia’ and eliminate Ukrainian identity in occupied CrimeaFree Yury Dmitriev!Russia removes memorial to Katyn Massacre in new attack on historical truthA brief description of KHPG strategic litigations in July–December 2019The Facts about Anti-Semitism in Ukraine that Russia doesn’t want knownPoland charges three with terrorism & sees Russian link in arson attack on Hungarian Centre in UkraineA brief description of KHPG strategic litigations in January–June 2018Russian prosecuted for posting that USSR invaded Poland in 1939 denied asylum in Czech RepublicVaad of Ukraine Statement in Response to US Congressmen Letter Concerning Anti-Semitism in Poland and Ukraine
• Topics / Politics and human rights 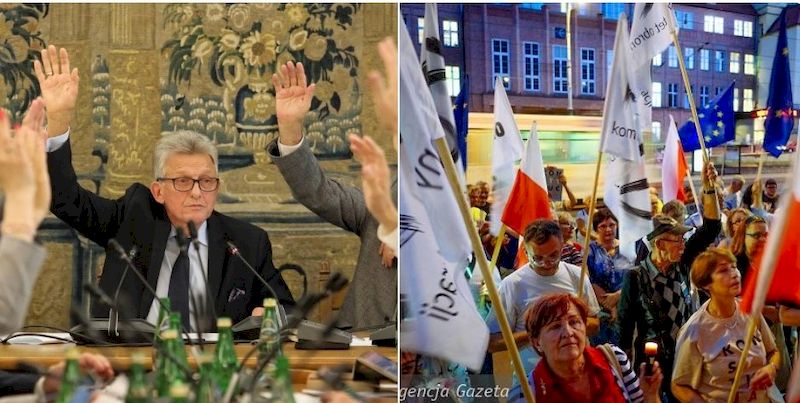 Poland’s President Andrzej Duda has signed the latest of several bills drawn up by the ruling Prawo i Sprawiedliwość [PiS] party aimed at bringing the Supreme Court under its control.  This Court, headed by a strong critic of the government’s attack on the judiciary, is effectively the last bastion after systematic moves since 2015 to reign in all other judicial bodies and install loyal people in top posts. There is still a chance of defending democracy and rule of law in Poland, but the danger could not be greater.  For months now, there have been calls from all of Poland’s former leaders; Solidarity heroes; the Human Rights Ombudsman; the legal profession; human rights groups and ordinary citizens for the EU to help save the Supreme Court.  This is easily within the European Commission’s scope since it can lodge a challenge against the law with the EU’s Court of Justice, which could put a hold on the law’s implementation pending its ruling.

This would be all the more warranted given the judgement issued on 25 July by the same Court of Justice of the European Union in response to a question raised by Justice Aileen Donnelly regarding extradition of a Polish national from Ireland. The Court had been asked to determine if EU judges can and should consider whether a person would get a fair trial in Poland, an EU country, considering the changes underway in that country.

Poland’s Prosecutor General, who doubles up as Justice Minister, has tried to present the Court’s judgement as reflecting the position of his government.  It was nothing of the kind.  While it left the decision to the court in any given case, it made it quite clear that it should consider whether the erosion of justice, identified in EC assessments, etc., would give grounds for believing that a person’s right to a fair trial would be infringed if returned to Poland and, if necessary, halt the extradition.  This is a devastating indictment of the so-called ‘judicial reform’ of the current Polish government, and is likely to significantly complicate extradition procedure.

The European Commission had been following the situation with concern for two years, and on 20 December 2017 enacted Article 7, the first time that this provision has even been implemented.  The Commission’s words were strong:

“The European Commission is taking action to protect the rule of law in Europe. Judicial reforms in Poland mean that the country’s judiciary is now under the political control of the ruling majority. In the absence of judicial independence, serious questions are raised about the effective application of EU law, from the protection of investments to the mutual recognition of decisions in areas as diverse as child custody disputes or the execution of European Arrest Warrants”.

The Commission put forward a number of steps which “need to be taken by the Polish authorities to address its concerns”.

The amendments to the Supreme Court Law needed included ensuring that the lowered retirement age was not applied to current judges and removing the extraordinary appeal procedure, which includes a power to reopen final judgments taken years earlier.

There were also demands regarding the National Council for the Judiciary which the government has effectively already changed the makeup of, and also removing the power of the Minister of Justice Zbigniew Ziobro to prolong, or not, the mandate of judges, and to appoint and dismiss presidents of courts.

The Commission also called on the Polish government to rectify the situation with the Constitutional Tribunal which was the first body to come under attack, and which is now headed by a person who appears unwaveringly loyal to the government in power.

PiS made a few changes of post, clearly aimed at indicating a will to dialogue and compromise, but no real changes to the flawed legislation.

In April, the Human Rights Ombudsman Adam Bodnar warned that the government was concentrating power in its hands, taking over the public media, the security service and the prosecutor’s office.  PiS has resorted to the long abolished practice of merging the posts of Prosecutor General and Minister of Justice.  This has placed an alarming amount of scope for influencing both the judiciary and the prosecutor’s service in the hands of one man – Zbigniew Ziobro.

“Recent actions by Polish Justice Minister Zbigniew Ziobro show the risks judges face when they act against the desires of the government. Last month, Ziobro announced that judges should face disciplinary measures for applying the Polish constitution directly in their judgments. Instead, they should ask the Constitutional Tribunal for its opinion. The alternative, he said, would be legal anarchy”, Bodnar wrote.

There have been numerous reports of judges coming under pressure and facing threats of disciplinary or criminal proceedings in retaliation for their independence.

Protests are now underway, but nothing like the huge protests seen in July 2017 which resulted in Duda agreeing to veto two of three flawed laws, those on the National Council of the Judiciary and the Supreme Court.

Fears that this was simply a ploy or delaying tactic proved well-founded.  By November 2017, it had become clear that Duda had come to an agreement with PiS Head Jarosław Kaczyński and that the laws Duda was proposing were, if anything, worse than those that he had vetoed.  The government was to be able to choose a majority of the candidates for the National Council of the Judiciary, with this to be used to replace the 40 % of Supreme Court judges which the new law would make possible to remove by lowering the retirement age to 65.  It is quite likely that a key target was from the outset the First President of the Court, Małgorzata Gersdorf, who had strongly condemned earlier moves to bring the Constitutional Court under PiS control, and who would not tolerate the Court’s politicization.

PiS has also used public television which it gained control over back in 2015, as well as prominent politicians, to push the narrative that its so-called ‘reform’ is aimed at clearing the judiciary of the old guard from socialist times.  There is little, if any, justification for the claims, which sound especially hollow, given that the PiS MP most active in pushing through all these laws is 66-year-old Stanisław Piotrowicz.  His career most assuredly dates back to communist days in Poland, when, as a prosecutor during martial law imposed in 1981, he is known to have written the indictment for at least one opposition activist.

As the new Supreme Court law was due to come into force on July 4, there were a huge number of appeals from human rights and law organizations, etc. for the European Commission to challenge the law before the European Court of Justice.

The Commission did make a statement on 2 July, but unfortunately confined itself to sending a Letter of Formal Notice to Poland regarding the Law on the Supreme Court, and giving the Polish government one month to respond to the initiation of infringement procedure, since “law dialogue remains the Commission’s preferred channel for resolving the systemic threat to the rule of law in Poland”.

It is almost certainly the preferred way for PiS as well, since the latter effectively gained a month’s respite.

Since Judge Gersdorf has stated that she remains First President of the Supreme Court, as set out in the Constitution, until 2020, and thousands came to ensure that she was not prevented from entering her office on 4 July, PiS used this month’s respite to whip through another law aimed at making it easier to replace her.

This is the law which ex-Military Rule prosecutor Piotrowicz pushed through the original Sejm committee, and which was voted for by the PiS majority in both houses at record speed, before being equally swiftly signed by Duda on 26 July.  He signed it, as he has the other laws, despite them being evidently unconstitutional, with angry Polish citizens out on the streets in a large number of cities chanting “You’ll go to prison” for this!

For those of us who followed the EU’s attempts at dialogue with Ukrainian President Viktor Yanukovych, the frustration is intense.  The stakes are simply too high for further ‘law dialogue’. If the government is in such a hurry, it clearly has reason to need the Supreme Court under its control.  One such reason is likely to be that it is the Supreme Court which has the power to determine whether elections are free and fair.  Or, if it has been reigned in, the power to reject legitimate concerns that they were, in fact, rigged.