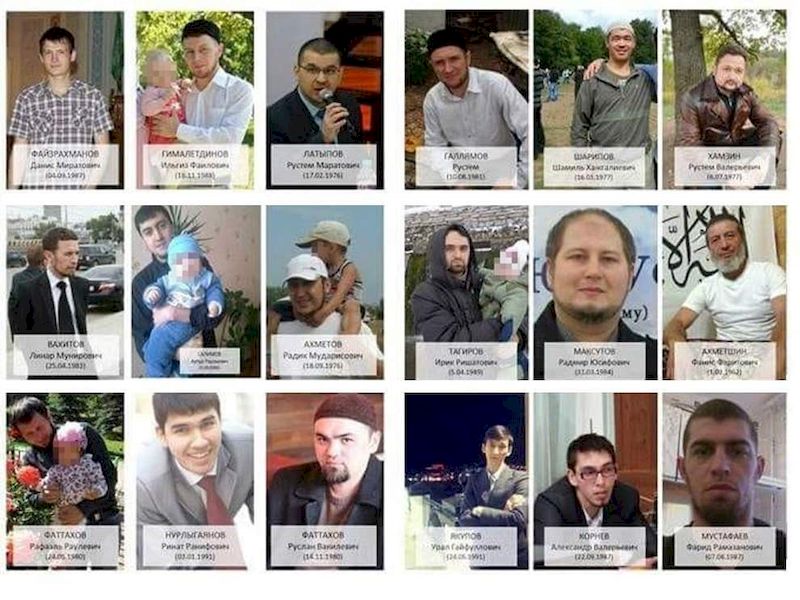 A Russian court has sentenced 21 Muslims from Ufa in Bashkortostan (Russian Federation) to terms of up to 24 years’ imprisonment on the same gravely flawed charges as those facing many Ukrainian Muslims in Russian-occupied Crimea.  Most of the men also received huge fines.  As in Crimea, the men were not prosecuted for any crime they had committed, only for alleged involvement in the peaceful Hizb ut-Tahrir movement.  The renowned Memorial Human Rights Centre, which declared all the men political prisoners back in April 2016, explains that those who refused to ‘admit guilt’ were charged additionally with ‘planning a violent seizure of power’ under Article 278 of Russia’s criminal code.

While the sentences were being read out on 30 July, the defendants all exposed T-shirts with signs reading: ‘Political prisoner’; ‘Islam is against terror’; 15 years for books’; I am a Muslim and against terrorism”, etc.

This pan-Islamist movement, which is legal in Ukraine and most countries, was declared ‘terrorist’ by Russia’s Supreme Court in 2003 in a ruling that was kept secret until it was too late for members and human rights organizations to lodge an appeal.  No real justification for the ruling was ever provided, although this was clearly needed since Hizb ut-Tahrir is not known to have committed an act of terrorism anywhere in the world.   According to human rights expert from the Memorial Human Rights Centre, Vitaly Ponomaryov, Russia has used its so-called anti-extremism legislation to launch “a conveyor belt of political repression where you can be sentenced on the basis of spurious cases which have little in common with reality”.

The prosecutions enable the FSB to apparently achieve good results at ‘fighting terrorism’ and achieve promotion, while requiring very little effort.  As mentioned, no evidence of any actual crime or even plan to commit a real crime is required, with Article 205.5 § 1 and §2 of Russia’s criminal code punishing merely for organizing or taking part in a Hizb ut-Tahrir group.

There is also no need for the ‘investigators’ to provide real proof of involvement.  In this case, as in many others, ‘secret witnesses’ were used.  These could be people with an axe to grind against the defendants, or somebody who had been threatened with arrest on identical charges if he didn’t bear false testimony, In the case of the first four Crimean Tatars accused of such charges after Russia’s occupation of Crimea, FSB ‘experts’ were also cited, finding ‘proof’ of Hizb ut-Tahrir involvement, for example, in the use of a particular word, obviously oblivious to the fact that the word is very commonly used in Crimean Tatar.

In occupied Crimea, the ‘conveyor belt’ nature of these ‘trials’ and lack of demand for real evidence have resulted in a number of people being arrested almost certainly for their human rights or civic activism (human rights activist Emir-Usein Kuku, many members of Crimean Solidarity), or for their refusal to act as informants for the Russian FSB.

The sentences were passed by a panel of judges, under presiding judge Oleg Semyonov from the Privolzhsky District Military Court, who came to Ufa for the ‘trial’.

23 Muslims from Bashkortostan were arrested in February 2015 and charged with involvement in Hizb ut-Tahrir under Article 205.5 § 2. That charge only allows for a one-year term of detention.  Therefore, after the year was up, and only three men had agreed to plead ‘guilty’, the others were also charged with attempted violent seizure of power, under Article 30 § 1 and Article 278.

In its April 2016 statement, Memorial HRC said that it considered all the defendants to be innocent since Hizb ut-Tahrir was described as an ‘international terrorist organization’.  Neither the Supreme Court, nor the prosecution in the Ufa case had provided any evidence of the organization’s terrorist nature, or of any other form of violence that it had been involved in.

The investigators base their charges of planning a violent seizure of power on alleged actions which are either legal, or not punishable under law.  These include, for example, spreading theological ideas that purportedly lead to ‘tendentious thinking and taking part in rallies in support of people arrested.

None of the people had been in possession of firearms or other weapons, nor was the prosecution able to present the alleged plan to seize power.

In its statement after the sentences were announced, Memorial HRC pointed to the excessive amount of time that the men had been held in custody and to evident and multiple violations of the men’s right to a fair trial, including flagrant falsification of the file material. There had also been reports, Memorial said, of the men being subjected to torture and beating while held in detention.

All of the above is disturbing similar to the situation in Crimea except that there Russia is also in the gravest breach of international law.  It is persecuting Ukrainian Muslims according to Russian legislation which, as occupying power, it has no right to apply.  It is also persecuting Muslims for their faith with the excuse found being supposed involvement in the Hizb ut-Tahrir movement which always was and remains legal in Ukraine.