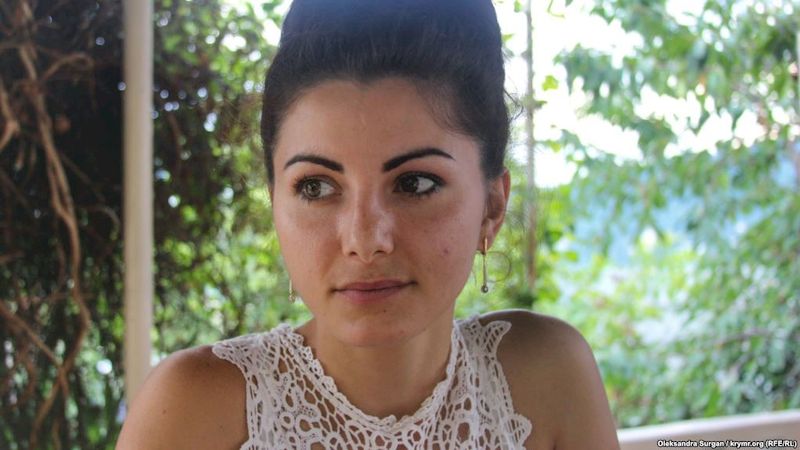 Russian enforcement officers came for Elina Mamedova between three and four years after she reposted some material from a pro-Ukrainian page on the VKontakte social network.  There were three reposts from 2014/2015, with no added comments, yet the young Crimean woman is now facing criminal charges of ‘inciting hatred towards Russians’.  This is not the first time since Russia’s illegal annexation of Crimea that such charges have been laid for expressing a pro-Ukrainian position, however this is over material that Mamedova simply reposted.

Mamedova is not an activist in any way, and she herself suspects that neighbours, with whom her family have long had strained relations, could have written a ‘denunciation’.  Such ‘denunciations’ have certainly made a comeback in Russia since Vladimir Putin came to power, and while Crimea is occupied, the same can be expected here too.

She is adamant that the charges are without any foundation.

“I can’t say that there was anything against Russians.  They were against those people who came onto the territory of my country – Ukraine, with weapons, and with the help of murder and violence, imposed their order here”, she explains.

Mamedova lives with her partner and her parents in the village of Chekhovo, which is in the greater Yalta region.  Enforcement officers, together with people from the Russian Investigative Committee turned up at their home in the morning of 13 June 2018.  They removed all technological items, including her mobile phone.  As is often the case, the men brought the official ‘witnesses’ with them, which is a flagrant breach of procedural norms.

Mamedova was taken away for questioning then, and two days later when she was informed that criminal proceedings had been brought under Article 282 § 1 of Russia’s criminal code (‘inciting hatred or enmity, denigrating human dignity) over three reposts.  The charges carry a sentence ranging from a fine to imprisonment from two to five years.

The ‘investigators’ initially tried to get the young woman to accept a state-appointed lawyer and have openly expressed their dissatisfaction that Ladin has taken the case.  He is one of the Russian lawyers currently playing a very important role in representing Crimean political prisoners, and highlighting the constant infringements of his clients’ rights.

In this case, the infringements include refusing to allow the defence from photographing the material of the case, although even Russia’s Supreme Court has ruled that this should be allowed.

Ladin reports that a ‘psychological-linguistic expert assessment’ has been ordered. Since this is to be carried out by a person he has encountered in previous such cases in Crimea, he has no doubt that she will go along with the prosecution line and is therefore planning to order an independent assessment.

There has been an ever-increasing number of administrative prosecutions in occupied Crimea over posts or reposts on social media, some dating back to before Russia’s invasion and annexation.  Prominent rights lawyer Emil Kurbedinov was detained on 26 January 2017 and then imprisoned for 10 days on insultingly absurd charges, linked with a video posted on a social network in 2013.  Crimean Tatar activist Remzi Bekirov was jailed for five days, purportedly because of a 7-year-old repost on a VKontakte social media page that he had deleted several months earlier.

Another Crimean Tatar, Ismail Ramazanov is currently facing identical criminal charges as those against Elina Mamedova, and was only released from custody because the criminal charge does not allow for over six months in detention (details here).

There has, however, recently been a criminal conviction under the same Article 282 § 1 merely over a repost.  Although not in Crimea, the court case against Russian Roman Grishin in June 2017 was similar in treating a reposted musical video criticizing Russian aggression in Ukraine as ‘inciting hatred of Russians’ (see:  Russian convicted of ‘incitement’ for reposting criticism of Russia’s war against Ukraine