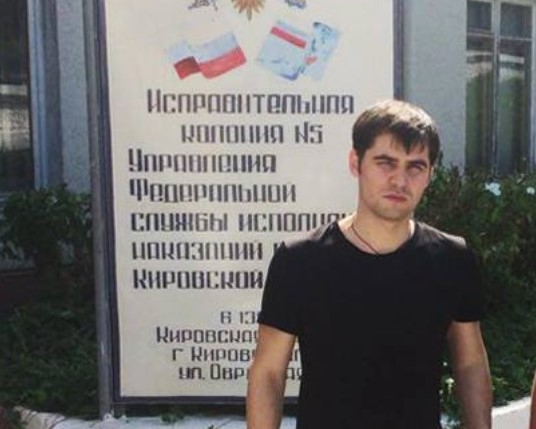 Oleksandr Kostenko has been released from a Russian prison after being forced to serve a legally absurd sentence to the end.  He is one of two Ukrainians, together with Andriy Kolomiyets, sentenced under Russian legislation on charges related to Euromaidan in Ukraine, over which Russia can have no jurisdiction.

Kostenko’s three and a half year sentence was officially due to end on 5 August, but where, as in this case, that falls on a Sunday, the release takes place on the previous Friday.  The 32-year-old Ukrainian was met by the Ukrainian consul and two members of the Kirov oblast Public Monitoring Commission [ONK] Artur Abashev and Denis Shadrin.  Abashev waited until Kostenko was safely out of the area before revealing a few details about the release, the punishments meted out over the final months, and about information which Kostenko was able to confirm about the systematic beating of prisoners.

As reported earlier, Kostenko had been placed in a punishment cell [SHIZO] on 21 June.  The grounds were fabricated, however Kostenko couldn’t deny them, since you get an extra 10 days punishment for objecting.  Abashev now reports that there were two such periods in SHIZO, after which Kostenko was placed in a cell-like room.  The latter is also a form of punishment, and in this case, Abashev reports, Kostenko was deliberately held together with a prisoner who is suspected of having tuberculosis.

Abashev earlier explained to Krym.Realii that they were providing no information about where Kostenko was heading after his release for safety reasons.  He noted that the car they were travelling in was being followed, and assumed this was the FSB.

Kostenko retracted all such ‘confessions’ as soon as he was able to see to a real lawyer, Dmitry Sotnikov. The latter repeatedly endeavoured to get criminal investigations initiated over both the initial torture, and ongoing ill-treatment of his client while he was held in detention.  All such attempts were rejected, despite the physical evidence backing Kostenko’s allegations.

Kostenko was charged with slightly injuring a Ukrainian Berkut officer, Vitaliy Poliyenko, in Kyiv on Feb 18, 2014.  He had, it was claimed, deliberately aimed a cobble stone at the Ukrainian, with this allegedly resulting in Poliyenko receiving an injury “in the form of a large haematoma on the left shoulder”.

Since the Berkut officer had not been a Russian national in Feb 2014, there was no possibility of keeping Kostenko in detention and then imprisoning him.  Kostenko was therefore later also accused of ‘unlawfully obtaining, keeping or carrying the main parts of a firearm’.  The investigators claimed to have found a rifle barrel when searching his home.  Not one of the official witnesses of the search confirmed this.  The investigators claimed that Kostenko’s father, Fedir Kostenko had identified the gun barrel as belonging to his son.  They also claimed, however, that it was Kostenko Senior who gave permission for the search.  Fedir Kostenko disappeared shortly after this in circumstances which remain of the greatest concern.

The court ignored both the surreal absurdity of the indictment and Kostenko’s retraction of his initial ‘confession’.  On May 15, 2015,  Judge Viktor Mozhelyansky from the Kievsky District Court in Simferopol found Kostenko guilty of both charges, and sentenced him to four years imprisonment.  The sentence was later reduced to 3.5 years.  The Memorial Human Rights Centre soon afterwards declared Kostenko a political prisoner.

As mentioned, this was one of two cases where Maidan activists have been directly charged and ‘convicted’ of entirely unprovable ‘offences’ during Euromaidan.  They were initiated by Natalya Poklonskaya, installed as ‘prosecutor’ after Russia’s invasion of Crimea who has been under western sanctions ever since.  The second ‘prosecution’ was similar in detail (the use of torture; an extra suspect charge thrown in and the total cynicism of the allegations), however this time 22-year-old Andriy Kolomiyets was accused of ‘attempted murder’ and sentenced to 10 years.

He is still serving this appallingly cynical sentence which deserves maximum publicity.  Details and an address for letters here: