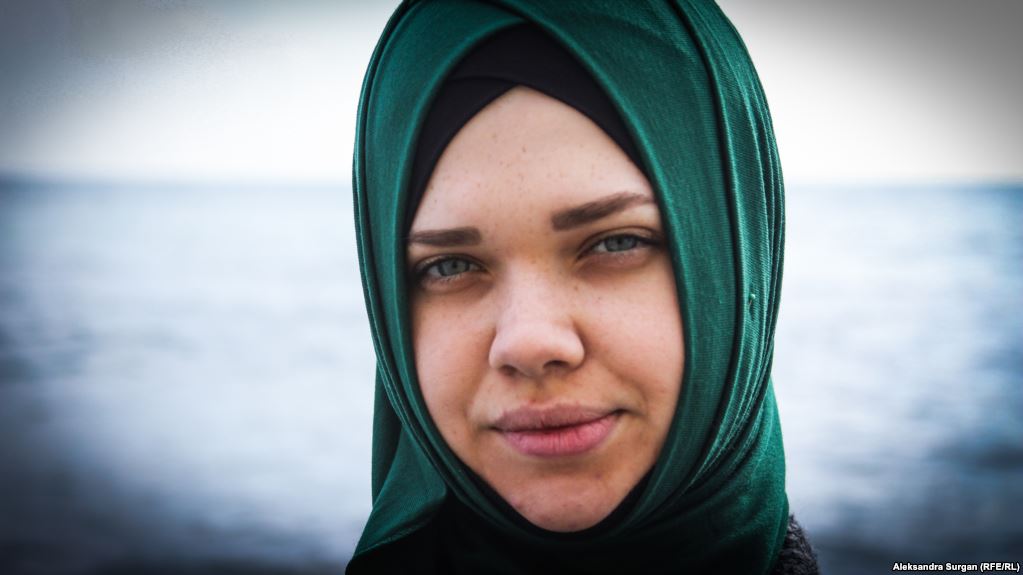 Russia’s Investigative Committee has initiated criminal proceedings against Gulsum Alieva, a Crimean Solidarity activist and the daughter of recognized political prisoner, Muslim Aliev, over a widely circulated photo, which the 21-year-old simply reposted on Facebook.  In Russian-occupied Crimea, this has been termed ‘inciting enmity’ (towards Russians) with the charges, under Article 282 § 1 of Russia’s criminal code, carrying a sentence ranging from a fine to up to five years’ imprisonment.  This is the second criminal prosecution against a young Crimean Tatar woman over social media reposts, however in this case it seems likely that Alieva has become the latest of many activists to face persecution because of their involvement in Crimean Solidarity, the civic initiative created to provide support for the ever-growing number of political prisoners in occupied Crimea and their families.

The image with text that Alieva reposted was, it seems, something that purports to be a quote from the Russian philosopher Ivan Ilyin, whom Russian President Vladimir Putin has been known to quote.  The words about Russia falsely attributed to Ilyin are extremely unflattering, with captions at the top and bottom in a different colour reading: “Russia is a country of moral monsters” and (at the bottom) ‘Death to Russian occupiers!”

However much Russians may not like the comments, it would be difficult to imagine them being viewed as inciting enmity in a democratic country.  Since this was simply a repost in May 2018, with no added comment from Alieva, it is likely that it is to be used as a pretext.

The criminal charges, reported by Alieva’s lawyer Edem Semedlyaev on August 10, come less than a month after a search lasting several hours was carried out of the Aliev home.

The operation on 19 July was officially not a search, but an ‘inspection’. Such verbal distinctions appear to be a mere ploy allowing Russia’s enforcement officers to carry out the same armed searches without fulfilling the formal requirements for a search.

There was certainly no reason for the youngest member of the Aliev family to see any difference.  Seidali was just seven years old on 11 February 2016 when armed men burst into his home, turned everything upside down and took his father away in handcuffs.  He was deeply traumatized then and again on 19 July 2018 when a by a huge contingent of armed and masked men, including FSB officers and men from the so-called ‘Centre for Countering Extremism’, turned up at a home in which there were only women and young children.  His mother had only arrived home two hours before, having travelled through the night from Rostov where her husband is on ‘trial’, together with human rights activist Emir-Usein Kuku and four other Ukrainian Muslims.

Typically, Semedlyaev was prevented from being present, a breach of the law that has become standard over the last four years.  Various technological devices were removed and Alieva was herself taken away to the Investigative Committee for interrogation.  Semedlyaev was at least admitted then, however he and the young woman were not there long, since she refused to give any testimony, citing her rights under Article 51 of Russia’s constitution.

Gulsum Alieva has been active over the last two years in the Crimean Solidarity civic initiative which has increasingly irritated the occupation regime through its active work in providing information about the ongoing spiral of repression in Crimea. Some of its most active participants have now been in detention for many months and are facing long sentences on trumped-up charges.

Russia began persecuting people for alleged involvement in Hizb ut-Tahrir soon after the Russian Supreme Court in 2003 declared this peaceful pan-Islamist movement ‘terrorist’.  Hizb ut-Tahrir is not known to have committed an act of terrorism anywhere in the world and is legal in Ukraine and most countries. The Supreme Court kept the ruling secret until it was too late for Hizb ut-Tahrir or rights organizations to challenge it, and never provided a good reason for its decision.  No more, however, was needed as justification for the FSB to conduct mass prosecutions, with men receiving sentences of up to life imprisonment merely on the unproven charge that they were ‘involved’ in the organization.

As with the first group of Crimean Muslims arrested on these charges, the renowned Memorial Human Rights Centre has seen no reason to wait for convictions before declaring the men political prisoners.

In its blistering analysis, Memorial HRC noted that ““Hizb ut-Tahrir cases are among the so-called ‘serial’ cases: the FSB obtains ‘high results’ (dozens of convictions) for minimum effort, practising mass persecution without any grounds”.

It is essentially on the basis of this one excerpt that Aliev could face up to life imprisonment and Kuku, Alimov, Bekirov; Dzhepparov and Siruk could be imprisoned for 10 – 20 years.

These so-called Hizb ut-Tahrir prosecutions are increasingly used as weapons against Crimean Tatars with a pronounced civic position or who have angered the FSB by refusing to act as informers.  Arrests since October 2017 have almost openly targeted activists or civic journalists involved in Crimean Solidarity,