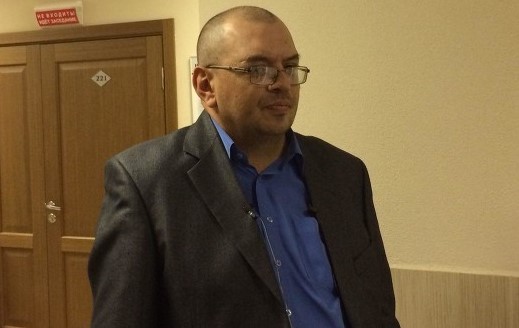 Edward Nikitin has gone on trial in St. Petersburg, accused of ‘extremism’ for reposting on social media a political cartoon and anecdote which points out, in the context of elections in Russia, that putting “a couple of cherries on a pile of shit” will not turn the latter into a cake.  Nikitin has already been added to Russia’s highly specific List of Extremists and Terrorists, and could, in principle, face a five-year prison sentence.  In fact, Russia is resurrecting another Soviet feature in this case since the prosecution is proposing that Nikitin be incarcerated in a psychiatric institution.

43-year-old Nikitin has Group 2 invalid status ‘without the right to work’. He lives in St Petersburg with his parents and is very active in the ‘Solidarity Petersburg democratic movement’, as well as in the Alliance of Heterosexuals and LGBT for equality’.

The trial, which began with a closed preliminary hearing at the Nevsky District Court on 21 August, is over reposts in VKontakte from back in 2015.  Nikitin was first called in for interrogation in 2016, with the criminal charges only formally laid in December 2017 under Article 282 of Russia’s criminal code (‘incitement to hatred or enmity to a social group, and also denigration of human dignity’).

The first was a cartoon, which poked fun at ‘vatniki’ – a slang term referring to the kind of Russian who blindly supports the regime, and, probably, the current narrative about a ‘Russian world’ (in which Ukraine is not respected as a separate country).  The image is of two bare feet with only a St George’s ribbon tied to one.  This ribbon has become symbolic of the current regime’s mythologizing of WWII and of its aggression against Ukraine. The humour is certainly black, with the caption reading “A good vatnik is a cold vatnik’.

Nikitin’s lawyer Maxim Kamakin explains that the ‘experts’ decided that the word ‘vatnik’ was used by people with anti-Russian views in a way that denigrates and defames Russian.  The caption ‘A good vatnik is a cold vatnik’ was interpreted as wishing for the death of the entire Russian people. 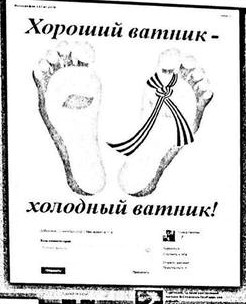 The defence totally reject the claim that ‘vatnik’ is a term representing the Russian people. In an interview to the Radio Svoboda Russian Service, Nikitin pointed out that nobody can tell you what kind of ‘social group’ vatniks constitute.  “The experts for some reason decided that this term applies to Russian citizens and to the Russian national which is not, by the way, written on the cartoon. As far as I’m aware, there’s nothing in the law about what this group is and there’s nothing about the limits of this group and who belongs to it”.

The cartoon was a repost, as was the anecdote about a father explaining to his son about the futility of elections in Russia (with the graphic example of cherries being unable to change a pile of shit!).

The experts on this occasion, Nikitin says, decided that the anecdote is a veiled expression of distrust in one or other elected deputy, civil service, and in the possibility of achieving any positive changes in the country.

The ‘investigation’ was carried out by Russia’s so-called Anti-Extremism Centre and the Investigative Committee.  There were three ‘experts’ – Rezide Salakhutdinova.  whose higher education is in ‘scientific communism’ (part of the teachings of Marxism-Leninism); Yelena Kiryukhina and Tatyana Mamaeva. Fontanka.ru reports that Kiryukhina, who found ‘extremism’ in Nikitin’s reposts, previously perceived no incitement to enmity in calls to beat up people from the Caucuses.

Kamakin points out that this is the first criminal prosecution for an anecdote since Soviet times under Leonid Brezhnev. He says that he couldn’t believe his eyes when he saw what the ‘experts’ had written, but warns that this could be just the beginning.  As soon as they get court practice smoothed out, there will be a torrent of such reports, provocations and prosecutions for anecdotes or jokes.

Fontanka.ru reports that in 2017 alone, there were 220 criminal prosecutions for social media posts, with 214 of these being reposted material.

While this may be the first anecdote that a person is on trial for, Russians have been prosecuted, and some imprisoned for pictures, especially where the images expressed criticism of the regime of Russian President Vladimir Putin, and especially Moscow’s invasion of Crimea and military aggression in Donbas.

See: Invasion of Crimea & war against Ukraine lead to prison and attack on free speech in Russia

Russia has also unleashed such repressive methods in occupied Crimea.  A number of Crimean Tatars, including prominent human rights lawyer Emil Kurbedinov, have faced administrative proceedings and sometimes terms of imprisonment for social media posts, many of which were from years before Russia’s annexation of Crimea.

Two young Crimean Tatar women are now facing criminal charges over reposts claimed to incite hatred towards Russians.  The reposts in Elina Mamedova’s case are from 3 – 4 years old.  21-year-old Gulsum Alieva, the daughter of a political prisoner and Crimean Solidarity activist, is charged over one repost, with this almost certainly the latest of many attacks on civic activists reporting on arrests and armed searches in occupied Crimea.

A third Crimean Tatar woman – poet Aliye Kenzhalieva was facing possible criminal charges of suspected ‘rehabilitation of Nazism’ over anti-war poems. Fortunately she was informed on 24 August that the Investigative Committee had concluded that there was no ‘crime’ detected in her verse.