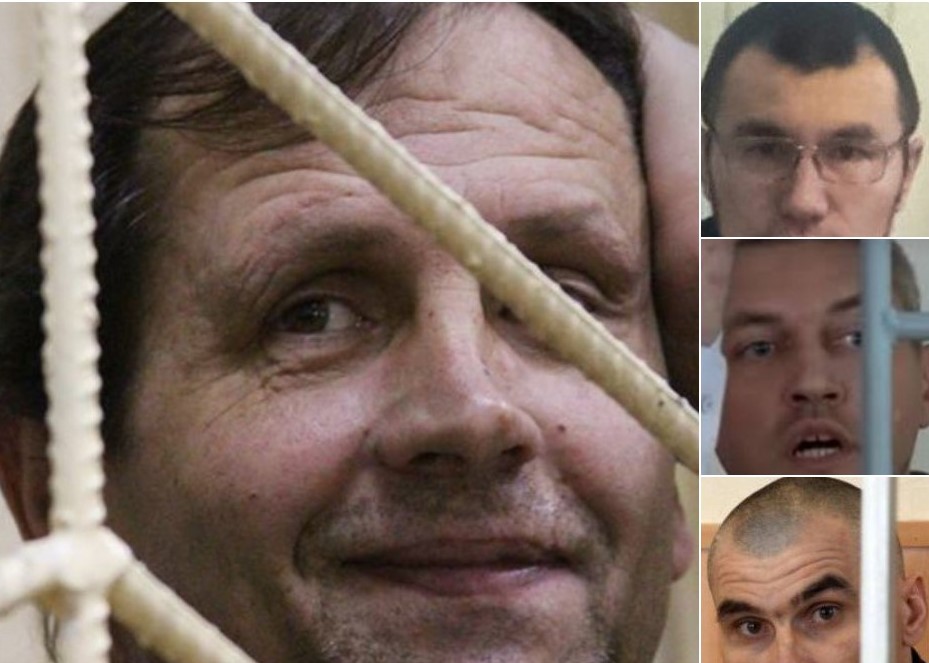 The European Court of Human Rights has responded swiftly to Ukraine’s request for urgent measures under Rule 39 regarding the state of health of four Ukrainian political prisoners: Volodymyr Balukh; Stanislav Klykh; human rights activist Emir-Usein Kuku and Serhiy Lytvynov.  The move is very welcome, however the number of political prisoners, especially in occupied Crimea, whose very life Russia is jeopardizing is much higher.

Ivan Lishchyna, Ukraine’s Representative to the European Court of Human Rights, reported on August 23 that the Court in Strasbourg has given Russia until 5 September to provide information about the men’s state of health and what medical treatment they are receiving. It asks whether particular prisoners have declared hunger strike and, if so, what measures are being taken in connection with this. Lishchyna writes that ECHR is thus breaking through the information vacuum which Russia has created around the state of health of Ukrainians whom it is illegally holding prisoner.

There are particularly grave concerns about the health of two of these prisoners.

The fact that the decision from ECHR came on 23 August – Ukrainian National Flag Day – could not have been more appropriate since Balukh is imprisoned in occupied Crimea for the Ukrainian flag he refused to remove from his home and his unwavering loyalty to Ukraine.

Balukh has been imprisoned, except for a period of less than a month under house arrest, since December 8, 2016.  The first criminal prosecution came just days after he nailed a plaque renaming his home No. 18 “Heroes of Nebesna Sotnya St’ in memory of the over 100 Maidan activists who were killed during Euromaidan.

Previous harassment, the timing and the gross falsification of this case prompted the authoritative Memorial Human Rights Centre to declare Balukh a political prisoner almost immediately.

Balukh first went on total hunger strike in protest at his first three and a half year sentence on 19 March.  He agreed to take the absolute minimum to prevent his organs collapsing 25 days later, however renewed his full hunger strike on 23 June in protest at the occupation authorities’ fabrication of a second charge aimed at imprisoning him for longer.  The court hearing on that day was the first time for months that he had been seen publicly and he looked dangerously gaunt and frail. His mother was able to see him on August 8 for the first time in 8 months, and said he was looking skeletal.  He was again taking this absolute minimum, which is not enough to prevent immense strain on his body.  Most worryingly, he has long complained of chest pains, and there is nothing to indicate that anything is being done to provide the medical care he requires (latest details here).

Klykh, a historian from Kyiv, was seized by the FSB in August 2014, after arriving in Russia, he thought, to visit a woman he had earlier met in Crimea. He was held incommunicado for 10 months, filled with psychotropic drugs and tortured into signing ‘confessions’ to insanely impossible ‘crimes’ supposedly involving Ukraine’s then Prime Minister Arseny Yatsenyuk and other prominent Ukrainian politicians back in 1994-1995.  There are very strong grounds for concern about Klykh’s psychological state after all that he has been through, including a Kafkaesque ‘trial’, in which even historical fact was ignored. (details here).  It was also reported in early June that Klykh was on hunger strike.

Kuku is one of six recognized political prisoners now on trial in Rostov, Russia on charges of involvement in Hizb ut-Tahrir.  This is a peaceful pan-Islamist organization which is legal in Ukraine and not known to have committed any act of terrorism anywhere in the world, but which Russia declared ‘terrorist’.  There is every reason to believe that the Crimean Tatar human rights activist has been targeted because of his rights activism and for his refusal to say nothing about previous, unrelated, forms of harassment, including an attempted abduction.

On 26 June (his 42nd birthday), Kuku began a hunger strike with the same demand to free all Ukrainian political prisoner as Ukrainian filmmaker Oleg Sentsov.  After pleas from his family and others, he did give it up but is reported to have had many health issues linked with the hunger strike and coming out of it (details of his persecution here)

35-year-old Lytvynov is imprisoned near Magadan in the Far East of Russia, in the  area of the Soviet Gulag camps.  Ukraine’s Ambassador Diana Ivanova was only recently able to visit him, although she had long sought permission to see him.

She reported that Lytvynov has lost 17 kilograms over the last six months due to the appalling food in the harsh-regime prison and the fact that he is not receiving parcels from Ukraine. He has spent the last six months in a damp cell without proper ventilation which can only have an adverse effect on his state of health.

Lytvynov is one of several Ukrainians who were abducted and / or arrested by Russian enforcement officers during the first months of Russia’s undeclared war against Ukraine.  Most were held incommunicado for many months while ‘confessions’ were extracted from them.  Lytvynov was originally supposed to be part of a grandiose ‘war crimes trial’, however his lawyer, the late Viktor Parshutkin succeeded, with the help of human rights activists, in proving that the war crimes could not have happened as the victims were entirely fictitious, as were their supposed addresses.  Russia’s Investigative Committee came up with equally implausible charges instead, and Lytvynov was sentenced to 8.5 years’ imprisonment (details here)

Other prisoners with urgent medical needs

The list of such prisoners is probably much longer, but there are immediate and very grave concerns about three other prisoners.

The plight of this young man who was just 19 when abducted by Russia’s FSB in August 2017 and taken to Russia highlights the other problem with ECHR rulings and orders under Article 39.   Russia’s response to a demand from the Court in Strasbourg that it provide information about Hryb’s state of health and medical treatment was to lie, and to even falsify medical records in order to ignore the direct danger to the young man’s life in a Krasnodar SIZO [remand prison].

Hryb suffers from a life-threatening blood circulation illness, which could lead to fatal haemorrhaging at any time.  He should certainly not be in detention at all, still less in a Krasnodar SIZO where the staff and even the local hospital would be unlikely to know what was required in an emergency (details here).

Any politically-motivated criminal prosecution is cynical, however that of four respected members of the Crimean Tatar community is unprecedented in its brutality. Kazim Ametov; Asan Chapukh; Bekir Degermendzhy and Ruslan Trubach have been detained on overtly fabricated charges since 23 November 2017.  Russian enforcement officers tried to detain 83-year-old Vedzhie Kashka, a world-renowned veteran of the Crimean Tatar national movement on that same day, but instead caused her death.  Given the attempts to hide video footage and block access to material about the case, it seems likely that Russian National Guard officers’ disproportionate use of force was behind her death.

Bekir Degermendzhy is 57 and suffers from acute asthma.  He has been forced to sit through detention hearings with an oxygen mask, and remains in the medical unit of the Simferopol SIZO.  65-year-old Asan Chapukh has just had his detention again extended despite another sharp deterioration in his health.  He suffered a micro-stroke in SIZO and still does not have movement in part of his body.