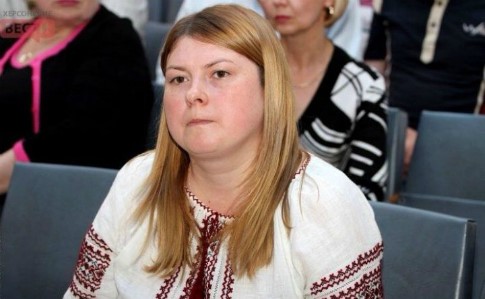 In comparison with purely formal investigations into most recent attacks on civic activists, there has been real movement and a number of arrests over the savage and potentially fatal acid attack on Kateryna Handziuk, Kherson civic activist and adviser to the Mayor of Kherson.  There was, however, one very disturbing false start, and claims now that Handziuk was targeted over non-existent pro-Russian views are also suspicious.

Handziuk was attacked in broad daylight on 31 July by one man who sprayed the civic activist with a litre of sulphuric acid, resulting in burns to 30% of her body.  She was airlifted from Kherson to Kyiv the following day.  There have been several attacks on civic activists this year, but the attack on Handziuk was particularly high-profile, both because of its unprecedent savagery and because Handziuk has been blistering in her criticism of individuals in the police force whom she accuses of corruption.  This was simply not an occasion where a criminal investigation into ‘hooliganism’ could be initiated and then quietly shelved.  Within hours of an initial attempt to qualify the attack as hooliganism, this was changed to ‘causing grave bodily injuries in order to intimidate a person’ and then to attempted murder.

Prosecutor General Yuri Lutsenko visited Handziuk in hospital on 3 August and then wrote that after hearing her ideas as to who could be behind the attack, he was passing the investigation on to the SBU [Ukraine’s Security Service].   The latter added the case to the Single Register of Pre-trial Investigations with it described as being “over the organization of s murder attempt, carried out with particular brutality, against Kateryna Handziuk, assistant to the Mayor of Kherson, and undertaken on the commissioning by police or state agency staff, with the support of separatist organizations in the South of Ukraine, in order to destabilize the socio-political situation in this southern region of the country”

In fact, all developments since then have been from the Kherson Regional Police and lawyer Yevhenia Zakrevska has positively accused the police of deliberate procrastination in providing vital material to the SBU, thus seriously hampering the latter’s investigation.

A suspect – Mykola Novikov - was arrested on 3 August, and almost immediately remanded in custody for two months.  As reported, the court did not consider that the alibi Novikov’s sister gave him should be taken into consideration, given the close family tie.

Shortly after Novikov’s arrest, Anton Herashchenko, an MP who has acted as adviser to the Interior Ministry, demanded ‘apologies’ from those people who had criticized the work of the police and had picketed the Kherson Police Department.  Herashchenko claimed that Novikov “was the man who directly carried out the crime” and who had bought the sulphuric acid.  He further asserted that Novikov’s guilt was fully documented.  By 8 August, Vyacheslav Abroskin, Deputy Head of the National Police was reporting that a different person had bought the acid.

Much more worryingly, journalists had begun probing Novikov’s alibi and finding it to be corroborated by witnesses who are not family members.  The police had made no attempt to question them.

Novikov was in custody for 19 days before being released on 22 August, after witnesses close to Handziuk did not recognize him, and the civic activist herself said that she was 99% sure he was not involved and that he’d been arrested so that the police could diffuse public attention to the attack (and speculation that it was connected with her blunt criticism of the Kherson regional police).  The police terminated criminal proceedings against him just minutes before the appeal hearing over his detention.

After his release, Novikov stated that he had been pressured by the police into signing a document saying that he had been near Handziuk’s apartment block on 31 July, whereas he was, in fact, some distance away, at the sea. He sent ‘greetings’ to Herashchenko and expressed bemusement that the latter should have found him guilty without trial.  He also thanked journalists and activists, and clearly believed that it was the high profile and publicity they provided that forced the police to admit that they’d arrested the wrong man.

Five men have now been arrested, with four remanded in custody and one under house arrest. All are suspected of involvement in the attack, with one man – Mykita Hrabchuk – suspected of the attack itself.  He is reported to have traces of burns from his exposure to the acid on his body.

According to police spokesperson Yaroslav Trakalo, all but one man have admitted guilt.  The person refusing to cooperate with the investigators is the person believed to have offered the other men money to take part in the attack.  All of the men had fought together in the ‘Ukrainian Volunteer Army’ 5th Division, with the man suspected of offering money for the attack being their former commander.

Zakrevska has rejected the claims made that the attack was because of Handziuk’s supposed pro-Russian views.  It is telling that fighters from the Ukrainian Volunteer Army had formally expressed their gratitude to Handziuk for her support.

Zakrevska is convinced that those who carried out the attack had no other motive, but financial gain.

Marina Pyetsukh, one of the journalists who helped publicize the fact that Novikov had a strong alibi, reports that there have been a whole series of attacks on pro-Ukrainian activists in the South of Ukraine over the past year.  The victims have reported in all such cases that they can see no clear movement in the investigation.

Developments in the Handziuk case must not be aimed at yet again prosecuting those who carried out a crime for remuneration, while failing to adequately seek out those who commissioned the crime.