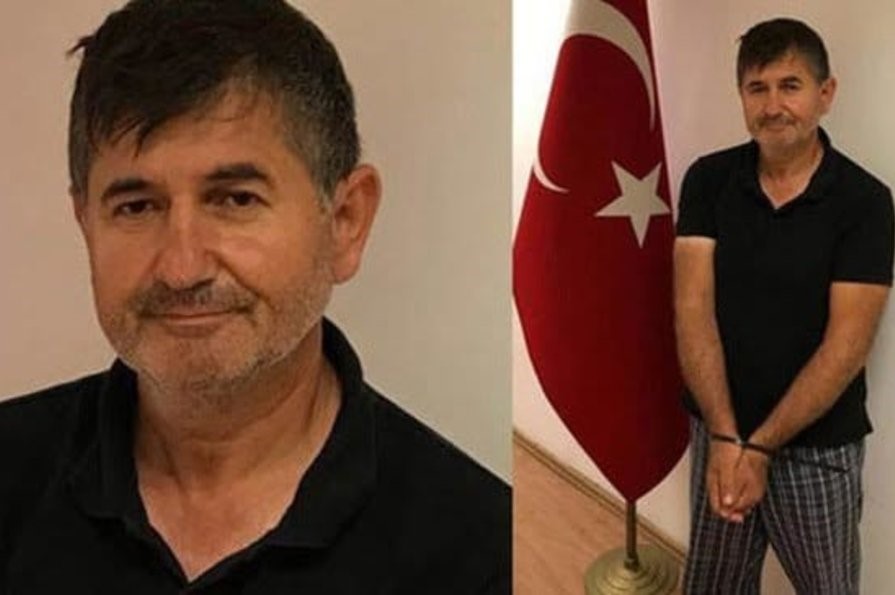 Ukraine’s Prosecutor General’s Office has shifted from total denial of any part in handing journalist Yusuf Inan over to Turkey on July 12, to claims that this was an extradition in full accordance with Ukrainian law.  There are strong grounds for believing that the latter is also not true, and that Inan was given no chance to appeal against his enforced return to a country where he faces imprisonment on questionable charges.  The same is probably true also with respect to Imam Salih Zeki Yigit who was forcibly returned to Turkey three days earlier..

It was initially reported that both men had been abducted by Turkey’s Security Service, with Turkey’s government-controlled news agency Anadolu showing both of them in handcuffs.

TV ATR reported that Inan was accused of membership in FETÖ, an organization linked to Fethullah Gulen, an opposition leader living in the USA, whom Ankara immediately claimed was behind the failed coup in 2016.  The organization is deemed terrorist in Turkey, though the USA has rejected any requests for Gulen’s extradition.

The pro-government Turkish newspaper Akşam asserts that Inan left Turkey in 2016, after the coup, and that he was in charge, from Ukraine, of a website which is sharply critical of the ruling party in Turkey.

His wife, Kateryna, says that they have been married since 2015, and that her husband had a residence permit for Ukraine.

ATR also noted reports in social media that the Turkish security service has been carrying out such extra-judicial operations in other countries as well, with Azerbaijan, Gabon and Kosovo mentioned.

Ukraine’s authorities went into denial mode immediately.  Although Kateryna Inan is adamant that her husband was arrested by the SBU, the latter’s spokesperson Olena Hitlyanska told Yulia Shestakova from Detector Media that she knew nothing about it and directed them to the Prosecutor General’s Office  [PGU].

Shestakova approached PGU and was told by spokesperson Andriy Lysenko that PGU knew nothing about Inan, that there had been no requests to them about him and that extradition issues were dealt with by the Justice Ministry who then sends instructions to the prosecutor’s office.   They had, he alleged on 17 July, received no requests (for extradition).

On 18 July, a spokesperson for the Mykolaiv Regional National Police denied that there had been any abduction and told Detector Media that Inan had been detained by the SBU.  She said that witnesses to the operation had called the police, but that the latter had ascertained that the SBU had the correct documents, and had left them to it.

By that time, Erdogan’s press service had announced that Inan had been brought to Turkey from Ukraine.

On 19 July, the Prosecutor General’s Office changed its story totally, claiming that Inan had been extradited to Turkey in response to an extradition request from the Turkish authorities.  Inan was supposedly accused of involvement “in an armed organization”.

The same spokesperson who had denied any knowledge two days earlier, now claimed that the Turkish Justice Ministry had asked PGU for Inan’s extradition back in October 2017, and that PGU had allowed the application in July this year, and handed Inan over. Lysenko’s explanation for why he said something quite different two days earlier was somewhat garbled.

He was also unable to state clearly whether or not an extradition check had been carried out, though still claimed that everything had been done within the framework of the law.

On 24 July, Detector Media reported that the Justice Ministry had responded to an official request for information, saying that they had not received any extradition request from Turkey. The Ministry had, accordingly, not sent anything to either PGU or SBU.

On 21 August, the Prosecutor General’s Office responded to a further information request from Detektor Media, claiming that there had been no appeal against the decision to extradite Inan, which had been directly handed to him, in the presence of an interpreter.

Inan’s lawyer Inna Kuzminykh asserts that her client was not given the opportunity to appeal, and certainly the 10 days which he has to appeal had not passed.  He was immediately taken to SIZO [a remand prison] and, seemingly very swiftly, to Turkey.

She says that since she was not present when it was (allegedly) handed to Inan, she could not file the appeal.

Kuzminykh reported on 31 August that the Mykolaiv Regional Court of Appeal has decided to ask Turkey for information regarding Inan’s whereabouts.  The court has been trying to hold an appeal hearing against the ruling by another judge for Inan’s arrest pending an extradition decision since 1 August.  Three of the four hearings have been aborted because Inan’s whereabouts are unknown, and he must be informed of the hearing.  The Mykolaiv Regional Prosecutor’s Office has admitted to not knowing where Inan is.

Erdogan carried out mass arrests after the purported coup attempt in 2016 and there has been considerable concern about the justification for very many of the arrests.

Whatever the charges were against Inan, there is no question that proper procedure both for the extradition process and for the deportation itself needed to be followed, with appeals allowed at each stage.  Even if we ignore the Prosecutor General’s Office’s disturbing about-turn on the subject of Inan, the very time that elapsed from when Inan was detained by the SBU and when he was shown in Turkey indicates that this bore all the hallmarks of an abduction, which Ukraine appears to have, at very least, sanctioned.