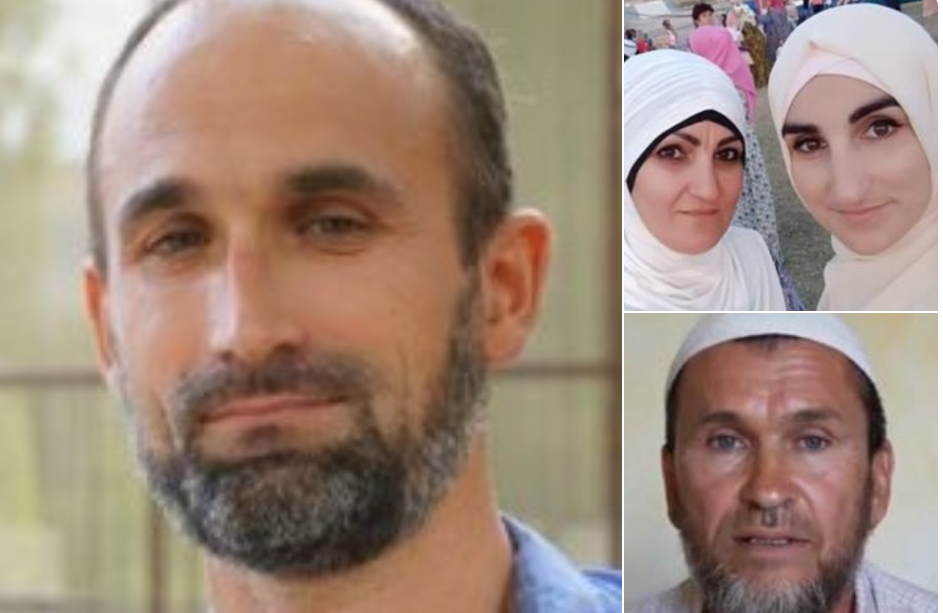 Civic activist Marlen Mustafaev has been jailed for 12 days over a Facebook post dating back to 2014, and may be facing a much longer term of imprisonment on an absurd charge of ‘inciting enmity’.  Three members of the Kulametov family were also subjected to searches and detained on 4 September, with Riana Kulametova almost certainly seized because she insisted on knowing where the armed and masked officers had taken her mother and streamed her stand-off with the officers onto the Internet.  Her father, Zekkiy Kulametov was jailed for ten days in all.  He was first sentenced to five days for mystery ‘refusal to obey the demands of the police’ (Article 19.3 of Russia’s code of administrative offences), over the same peaceful objections to the heavy-handed measures against his family, and then for another five days under Article 20.3, allegedly only a symbol, deemed by Russia to be from an ‘extremist’ organization..

The searches of three separate homes on 4 September appear to have been linked, though the only obvious feature uniting them was the evident attempt to intimidate Crimean Tatar activists and their families and lack of any real grounds for the large contingents of enforcement officers.

None of the four people detained was allowed to see a lawyer before they were brought to the ‘court’, and this was clearly not the only glaring infringement of their rights.  It was typical that Mustafaev’s 10-day sentence should have been imposed by Viktor Mozhelyansky, one of the ‘judges’ most notorious for passing politically-motivated rulings.

The search of Mustafaev’s home began early on Tuesday morning, with the civic activist then taken to the police station.  The pretext for the subsequent ‘court’ hearing at the Russian-controlled Kievsky District Court in Simferopol appears to have been a 2014 Facebook post showing a symbol from Hizb ut-Tahrir, the peaceful pan-Islamist organization which is legal in Ukraine and most countries, but which Russia has, without providing proper explanation, labelled ‘terrorist’.  Hizb ut-Tahrir is not known to have committed any acts of terrorism anywhere in the world.

This is not the first such offensive against Mustafaev, a well-known and respected activist.  On 21 February 2017, he was detained by OMON riot police on his way to work and taken home where a search began.  A number of other Crimean Tatars gathered outside, streaming the actions of the masked officers standing guard, one of whom began demonstratively photographing them.  When this did not deter them, 10 men were themselves seized by the officers and taken away.

Mustafaev was then charged over a 2014 post on the social network VKontakte, allegedly showing a Hizb ut-Tahrir symbol and sentenced, yet again by Mozhelyansky, to 11 days’ imprisonment. The other men were sentenced to 5-days imprisonment with many of them not even allowed a lawyer at the ‘court hearings’.

On that occasion, Russian state-controlled television claimed that the detentions had been on suspicion of links with Hizb ut-Tahrir, and embellished their reports with footage from some other arrest altogether.

Mustafaev is due to be interrogated on 5 September in connection with criminal charges under 282 § 1 of Russia’s criminal code (inciting enmity or denigrating human dignity).  It is unclear what the charges are about, however this is one of the standard ‘extremist’ norms most often used against activists and those expressing critical views in Russia and occupied Crimea.

As mentioned, the searches of the Kulametov family were supposedly in connection with them being ‘witnesses’ in the criminal case lodged against Mustafaev.

This was certainly not the impression created.  Zarema Kulametova was detained by officers while doing the community service to which she was sentenced for having allegedly ‘insulted and depressed’ a police officer (details here).  Both her husband, Zekiy Kulametov, and the couple’s adult daughter Riana made their objection to the treatment of Zarema, and the searches clear, but without any excesses that would have justified their detention.

During the second ‘court’ hearing, Kulametov’s defence counsel Mustafa Seydaliev pointed out that the supposed ‘expert assessment’ regarding the religious symbol had been made by a historian, not a religious school.  Kulametov himself stressed that he was a practising Muslim for whom it was natural to be interested in religious material, which he sometimes reposts.

The occupation regime has again detained women as well, but held short of jailing them, with both Zarema and Riana ‘only’ accused under the same Article 20.3, and fined one thousand roubles each.

It is unclear what the specific ‘symbol’ was in each of the cases, but everything about the events on 4 September suggests that pretexts were found for the latest repressive measures against civic activists.