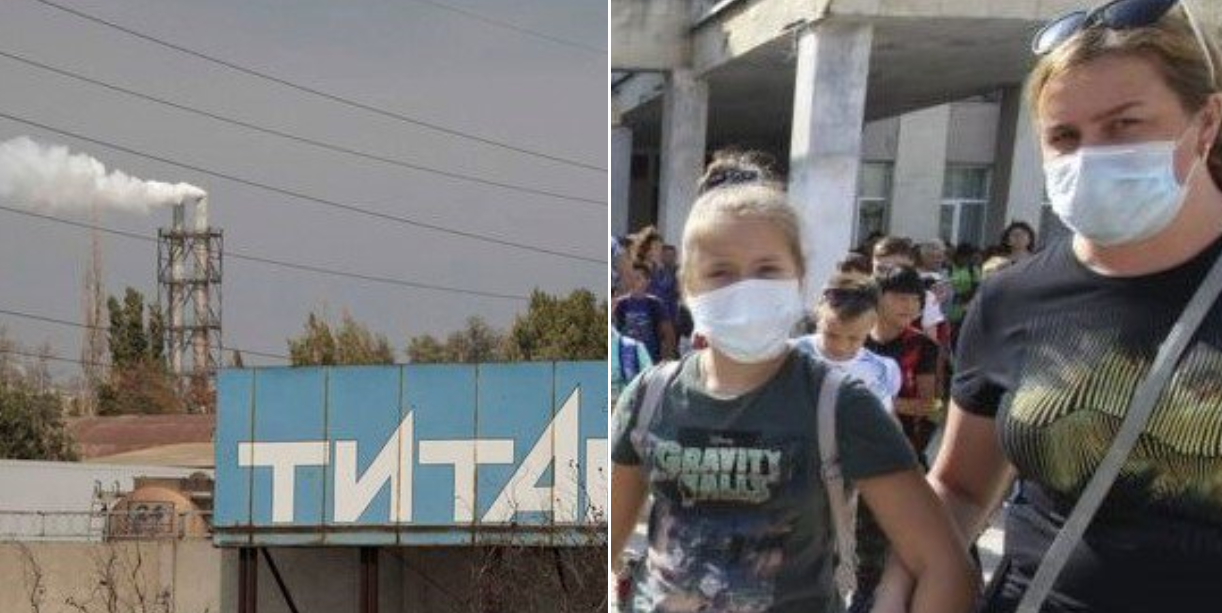 The Russian occupation authorities in Crimea took almost two full weeks to react at all to a dangerous chemical spillage with disastrous effects on Armyansk and the surrounding areas, including the Kherson oblast in mainland Ukraine.  The measures taken still appear inadequate, and seem aimed at assuring the population that nothing is wrong, which many residents are convinced is not the case.

Although the leakage, reportedly from an acid storage tank at the Crimean Titan Factory, occurred during the night from 23-24 August, schoolchildren were only evacuated from the area on 5 September, with parents given just an hour to pack the children’s things.  The de-facto authorities are still trying to downplay the scale of the problem, avoiding words like ‘evacuation’ and claiming there is no danger to health.

British writer Lily Hyde, who is currently in Crimea, writes that “the situation around Armyansk in Northern Crimea is absolutely, damningly indicative of what happens when you destroy a free and professional press”.  The coverage by the Russian-controlled Crimean media has to be seen to be believed, she adds, and is blistering about the lack of any information at all to even understand whether this is indeed a disaster or a minor accident.

Residents are seeing, breathing and feeling the consequences, which one described as ‘true hell’, and are clearly unconvinced by upbeat assurances  The photos posted on social media are alarming, as are reports of problems with breathing, etc., and of damage to crops and to the flora in the area.  A Krym.Realii video shows Sergei Aksyonov, the leader installed by Russia, claiming that there is no panic, no threat to health and that the children are merely being sent away as a preventive measures.  His words conflict with those of a mother who says that her husband has taken their children away from the area. She asserts that virtually everyone is feeling unwell and that one in two people have sought help in hospitals.

Ukraine’s Human Rights Ombudsperson, Ludmila Denisova reported on Wednesday that she had notified Erik Solheim, the UN’s Environment [UNEP] Executive Director and Jan Dusik, Director of the UNEP Regional Office for Europe.  She stresses that the  leak into the environment of an unidentified substance is affecting Crimeans, people living in the neighbouring Kherson oblast and presents a threat to other European countries.

She explains that the Ombudsperson’s Office began immediately receiving complaints from people in the North of Crimea who said that they were seeing a strange oily layer setting on metallic items in their apartments and on the roofs of buildings.  They say that this substance is of a yellowish shade and that there is a permanent smell of acid in the air, which makes it hard to breathe.

Denisova accuses the occupation authorities of concealing the real environmental situation, a complaint repeated by many people living in Crimea.

It is known that a toxic chemical leaked at the Titan Factory in Northern Crimea which is still owned by Ukrainian oligarch Dmitry Firtash.  It is seemingly not a hundred percent certain which specific substance was spilled and how much.

Dmytro Hutsuluk, a spokesperson for Ukraine’s Defence Ministry has asserted that the spillage occurred because the factory was hit by accident during Russian military exercises.  What proof there is of this is unclear, but it is certainly putting Russian-controlled media into overdrive trying to dismiss the allegations.

The Russian occupation authorities have claimed that the factory will now be closed for two weeks, though Ukrainian Environment Ministry monitors say that the factory appears to still be working.   The public assurances that workers would be given two weeks paid leave are also contradicted by reports on social media suggesting that the staff are still being forced to work or take leave at their own expense.

A sheet with advice to those remaining in Armyansk was widely circulated on social media.  If on the street or in public transport, people are advised to wear face masks or cover their nose and mouth with several layers of material, and to cover as much of their skin as possible.  Any bathing, washing, etc. should be in a large amount of running water.  All doors and windows should be closed, and children should not be allowed outside at all. 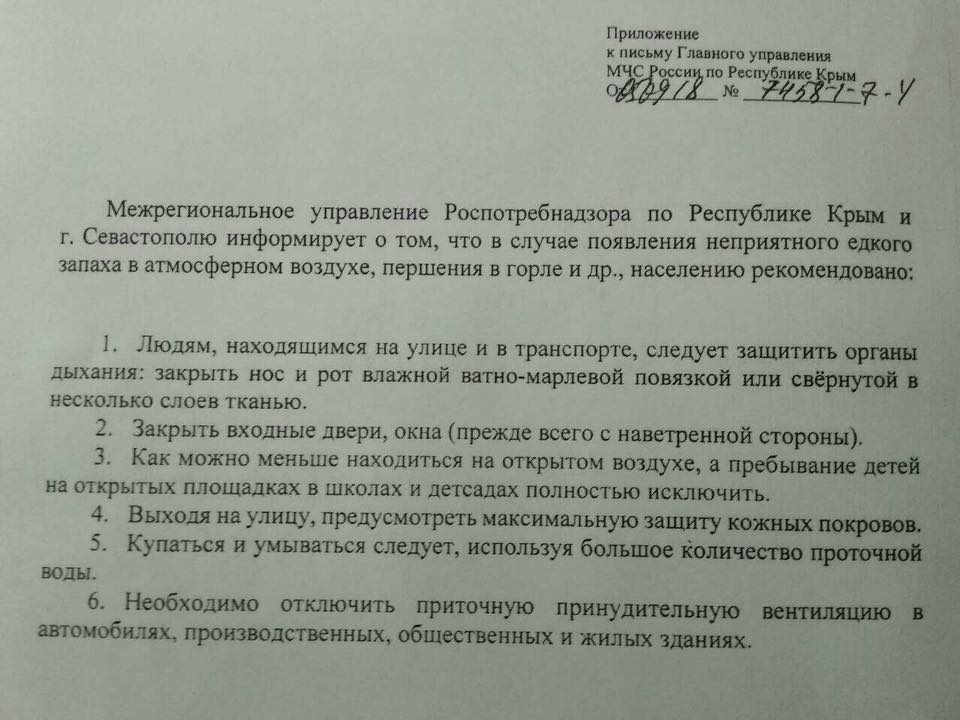 All of this, it should be stressed, is in very high temperatures, and with the peninsula already facing problems with water supplies due to Russia’s annexation of Crimea.  Ukraine did not refuse to provide water to its citizens, even under occupation, but did insist that the contract should correctly identify Crimea as occupied territory.  Russia preferred instead for the population to be deprived of its main source of water.

The only – Russian-controlled – media freely accessible in occupied Crimea appear intent on blaming Ukraine’s government because of the water situation, ridiculing the suggestion that Russian military exercises could have caused the situation, while in chorus denying that there is a situation and repeating assurances from Aksyonov and Co. that there’s nothing to worry about.