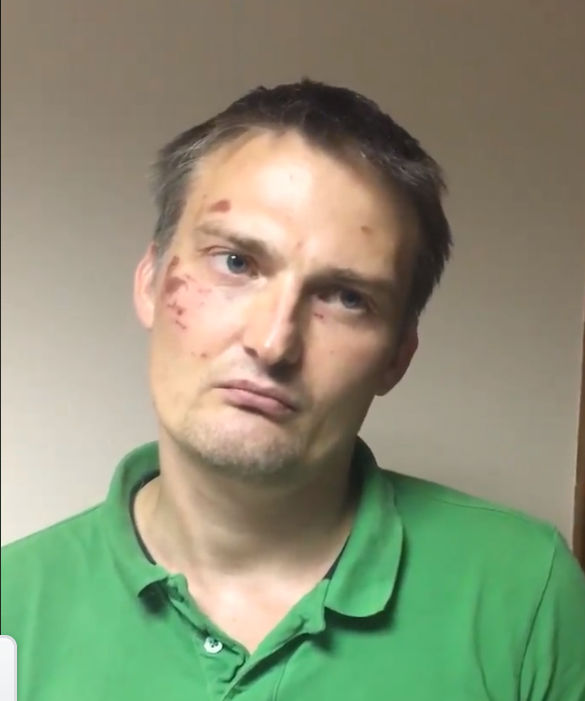 While images of Russian children, elderly pensioners and other protesters being detained, many violently, in Russian cities on 9 September rightly hit world headlines, there was a lot of police brutality and thuggery that went on away from the cameras.  It included the abduction of Mikhail Benyash, a 41-year-old lawyer from Sochi, who had been planning  to defend those detained for peacefully trying to take part in protests against pension reform.  Peaceful protest, like in Ukraine, is guaranteed by Russia’s Constitution, but in practice depends entirely upon the will of the authorities, and the latter in most cities had refused to ‘authorize’ demonstrations.

On 8 September, Benyash, who has previously defended protesters unwarrantedly arrested and prosecuted, was warned by enforcement officers that he would be imprisoned for 15 days if he tried to do his duty to defend protesters.  For that reason, on 9 September, he issued statements to both Russia’s Investigative Committee and the prosecutor’s office concerning this illegal behaviour by the police.

An hour after making this statements, two men in plain clothes seized him in the centre of Krasnodar.  They gave no explanation for this ‘detention’, but one called himself ‘Ivan’, though the others called him Dmitry.  Benyash recognized the other as somebody called Yegor Dolgov.

He tried to telephone in order to inform people that he had either been arrested or abducted, however they tried to grab his phone.  When he resisted, Ivan/Dmitry first twisted his arm, then tried to suffocate him.

One of the witnesses to this detention / abduction, Irina Barkhatova, began videoing what was happening, at which point she was also grabbed and forced into the car, with her phone taken away.  She was held in custody for 24 hours despite the fact that she has a child under 14 which means that it is illegal to apply administrative arrest. A ‘court’ later fined her 500 roubles.

They were taken to Oktyabrskoye, where with their arms behind their backs they were handcuffed.  Benyash says that he was then hurled onto the pavement head first, and then taken in that position upstairs in the building.  He did not realize immediately that this was a police station, and says that despite his repeated demands, not one of the men identified themselves as officers.

Taken into one of the offices, one of the men inflicted several blows to the head, and also pushed him down on the floor. He was clearly beaten badly enough for them to need to call an ambulance, seemingly the first of at least three occasions over the next 24 hours.

Throughout the 5-6 hours of this unexplained ‘detention’ and beating, he was held with arms behind his back handcuffed.

Despite his request, and persistent attempts by a lawyer colleague, he was prevented from seeing a lawyer until evening when Alexei Avanesyan essentially forced his way in.

Charges were later brought against Benyash under Article 19.3 (not obeying the lawful demands of a police officer) and 20.2 of the code of administrative offences (infringing the rules for holding a public event).

The cynicism is quite extraordinary, especially given the widespread reports, with video footage, of Denyash being seized by unidentified men in plain clothes.

It was claimed that he had ‘agreed’ to go to the police station, but that on their arrival, in the parking area, he had begun inflicting injuries upon himself and hitting his head against the car window.  He was then alleged to have tried to run away and “to repeated lawful demands that he stop his hooligan activities, he answered with a rude refusal and tried to provoke a fight with police officers.”

The authors of this surreal account go on to claim that since he could have caused physical harm to himself and others around, and to put an end to his purportedly unlawful actions, he was handcuffed, and physical force was applied.

It is inconceivable that the ‘judge’ could have believed this nonsense, yet Benyash was found ‘guilty’ and jailed for 14 days.

As of around 7 p.m. on 10 September, 250 Russian lawyers had signed a strong statement of protest, with this open for further signatures,  The Russian Federal Chamber of Lawyers had also issued a similar statement.

The authors of the open letter of protest wrote that they view this attack and abduction of their colleague as no private instance but a brazen offensive against lawyers by members of the police who are taking advantage of their obvious impunity when dispersing protests.”

Over a thousand people were detained on 9 September in different cities, with the largest number detained and the worst violence against protesters applied in St Petersburg.  Despite the countless photos showing police apparently beating protesters without any obvious grounds, the only two criminal investigations initiated have been for supposedly using force against police officers.

There were a disturbingly large number of children detained for totally peaceful protest, as well as elderly pensioners seemingly detained for holding single-person pickets which are the only form of protest in today’s Russia that officially do not require ‘permission’.

Marie Struthers, Amnesty International’s Director for Eastern Europe and Central Asia noted: “We’ve witnessed time and again the police being sent to the streets in Russia to crush peaceful protests. Their beatings of protesters and journalists are nothing new, nor are the ‘preventative’ arrests of protest leaders. However, the police have stooped to a new low by treating young peaceful protesters as if they were criminals. This is shameless and heart-breaking”.

Nor does it end here, since there are very likely to be a number of arrests and prosecutions of those who tried to exercise their constitutionally enshrined right to peaceful protest.