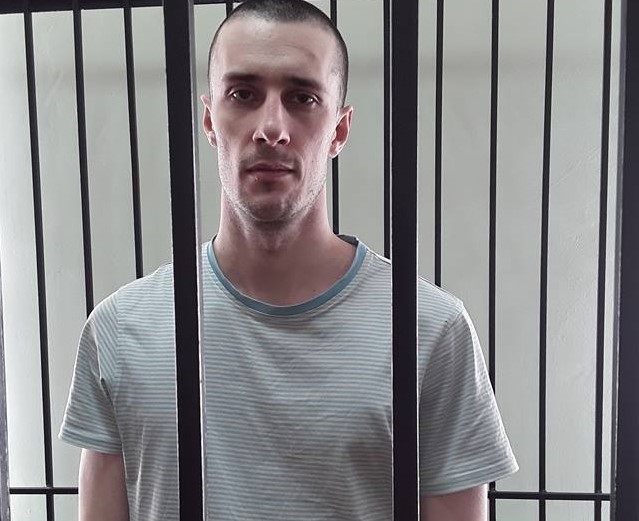 The prosecution in Russia’s trial of 29-year-old Oleksandr Shumkov has finished presenting its ‘evidence’ against the young Ukrainian who was abducted to Russia to face charges of involvement on Ukrainian territory in a movement which is legal in Ukraine. As if this were not surreal enough, the prosecution witnesses have proven no more than what Shumkov himself does not deny – that he was, in 2014, a member of the right-wing and nationalist Right Sector, a movement which is legal in Ukraine, but which Russia has constantly demonized.

Like most of Russia’s political trials of Ukrainians, the case is built out of testimony from ‘secret witnesses’, as well as from a person who has a vested interest in saying what the prosecution demands.  Even the ‘secret witnesses’’ voices are distorted although the prosecution was unable to provide any real grounds for justifying such secrecy.  It is, in fact, Shumkov himself who has on repeated occasions been threatened by prison staff with violent reprisals because of his staunch pro-Ukrainian position.

Shumkov turned 29 on 19 September, with this his second birthday in Russian imprisonment.  While the details remain unclear, Shumkov he appears to have been abducted in late August 2017 from the Kherson oblast and taken by force to Russia.  He is charged under Article 282.2 § 2 of Russia’s criminal code with taking part in Right Sector in Ukraine, with this treaten as ‘involvement in an extremist organization which has been banned by a [Russian] court’/ . The report from Russia’s Investigative Committee makes no mention of the fact that these ‘extremism’ charges are for actions on another country’s territory which did not violate the latter country’s legislation. .

Darya Kostromina has been following the ‘trial’ and believes it could end in the next few weeks.  At present the defence has been given until 25 September to prepare their evidence.  This is a political trial, and neither Shumkov’s family nor human rights activists have any illusions about it ending in anything but a conviction.  The authoritative Memorial Human Rights Centre has already declared Shumkov a political prisoner, finding cause for concern both with respect to how he came to be in Russian detention and in the charges themselves.

The charges could not be much more absurd since the prosecution is trying to prove what Shumkov has no intention of denying, and, according to Kostromina, Google has provided one of the prosecution’s main sources of ‘evidence’.

FSB officer Ruslan Kokulov, for example, told the court that Shumkov had told him at the border that he had been a guard to Dmytro Yarosh, in 2014 the head of Right Sector.  Kokulov had, accordingly, Googled the combinations Shumkov + Yarosh and Shumkov + Right Sector and, lo and behold, come upon ‘proof’.   These were photos of Shumkov with Yarosh, and a video of a press conference given by Yarosh in April 2014.

At one of the hearings, Shumkov thanked the prosecutor, Vladimir Minakov, for helping to prove his innocence through such ‘prosecution exhibits’.  Right Sector was only banned in Russia in November 2014, so even if one ignores the fact that it was and remains legal in Ukraine, any ‘evidence’ from April 2014 is entirely meaningless.  As Shumkov notes, by November 2014, he was serving in the Ukrainian Armed Forces and had no connection with Right Sector.

As mentioned, Russia makes extensive use of such anonymous figures in its political trials, and there is no way of verifying whether the individuals are who they claim to be.  In many cases, the defence believes that they are in fact FSB operatives.  In theory, the judge carries out a check of the person’s identity, however none of the political trials of Ukrainians to date have given any grounds for confidence that the judge would reject suspect ‘witnesses’, or allow the defence’s application for their identity to be revealed.

In fairness, it should be noted that when the defence asked for official documents from Right Sector regarding both Shumkov and a third ‘witness’ to be added to the case and the prosecution objected, judge Viktor Rukhmanov did agree to include the material.  Shumkov had spoken out in support of the defence’s application, pointing out, quite correctly, that the prosecution expected the ‘testimony’ of totally anonymous individuals to be believed, while questioning the reliability of formal documents issued by the organization.

The first ‘secret witness’, referred to as Ivanov, claimed to be an adviser to a Kharkiv MP from the Party of the Regions (the ruling party under President Viktor Yanukovych), and now the Opposition Bloc in the Verkhovna Rada.

He asserted that he had seen Shumkov at the Chonhar checkpoint on the administrative border with Crimea during the Crimea Blockade, and that Shumkov had been giving instructions to 7-10 people. It transpired that he had not heard these instructions, but claimed to know that this was what Shumkov had been doing because he was told this by an SBU [Ukrainian Security Service] officer who infiltrated Right Sector.  How the latter was supposed to have known is not revealed.

The nearest this ‘witness’s account came to evidence was when he claimed that Shumkov had been surrounded by people with Right Sector symbols on their clothes.  Although the written testimony claimed that Shumkov had been in military gear with a Right Sector chevron, in court Ivanov said he didn’t know whether Shumkov had had such a symbol.  This would be the only indicator of anything given that different groups took part in the Crimea Blockade, initiated in September 2015 by Crimean Tatar leaders Mustafa Dzhemilev and Refat Chubarov with human rights demands.

The second ‘secret witness’, Petrov, claims that as a Russian citizen, he had joined Right Sector in 2014.  His testimony was even more garbled, and confused, especially with respect to whether he had ‘seen’ Shumkov on a video during the Blockade in military uniform with Right Sector chevrons, or had merely been told that he had been thus dressed.

The prosecution’s ‘key witness’ is a Ukrainian from Kherson called Mykhailo Allanazarov who claims that Shumkov took part in Right Sector protests (around five) in the Kherson oblast right up till 2017.

It is questionable how ‘incriminating’ such testimony would be even if it had not been clear that Allanazarov is facing criminal charges in Ukraine for trading in weapons and drugs.  Under such circumstances, it is likely that he would be loath to annoy the Russian occupation authorities.

Doubts about the ‘witnesses’ must be secondary to the more fundamental lack of any possible substance to this ‘case’ altogether. Although there were doubts about some of the actions of Right Sector and other organizations who joined the Civic blockade in the autumn of 2015, the behaviour was not criminal in Ukraine.  Shumkov could have been covered in Right Sector insignia and colours and it would still not justify his prosecution in Russia.

Yet the Russian prosecution is based solely on this. ‘Investigators’ from the Bryansk Oblast Investigative Committee assert that Shumkov “took an active part in the activities of the Ukrainian extremist organization ‘Right Sector’ directed against the interests of the Russian Federation and encroaching upon its territory integrity”.

Shumkov is said to have taken part in September 2015 “in the blocking of roads, obstructing the supply of food and other vital goods to the Republic of Crimea”, as well as in actions “aimed at intimidating residents of the Kherson oblast protesting against the Crimea blockade and calling for the reestablishment of economic and political relations with Russia”.

The Investigative Committee claims that Shumkov’s ‘significant role’ in Right Sector is indicated by the fact that he was for some time the bodyguard of former Right Sector leader Dmytro Yarosh.

It is asserted that “in August 2017” Shumkov was detained by Russian border guards at a border crossing in the Bryansk oblast as he tried to enter Russia, with the FSB [Russian security service] involved in the ‘criminal proceedings’.

Even had Shumkov really been trying to cross into Russia, he should have simply been refused entry.  He would have needed to be on a wanted list for his detention to be possible, and then only with Ukraine’s notification.

There is nothing to suggest that he was on any wanted list, and there are serious grounds for believing that he was abducted from close to the Ukrainian-Russian border, on the Ukrainian side.

Shumkov was serving in the Ukrainian Armed Forces.  At the time of his  disappearance in August 2017, he was working as an investigator for the military prosecutor of the Kherson Garrison. All of this, as well as his former involvement both in Euromaidan and in Right Sector, make it simply inconceivable that he would have “tried to enter” the Russian Federation, given the number of Ukrainians imprisoned on politically motivated charges.  Shumkov was doubtless aware of the trial and huge sentences passed in Russia on Crimean filmmaker Oleg Sentsov and civic activist Oleksandr Kolchenko, despite the lack of any evidence at all of the ‘Right Sector terrorist plot’ they were accused of.

Memorial HRC has pointed to evident political moves behind Russia’s persecution of Shumkov.  They write that “It reflects the essence of the Russian-Ukrainian armed conflict.  On the one hand, Russia officially denies any part in the conflict, while on the other it takes an obviously anti-Ukrainian position reflected in propaganda; in the unofficial military support for the self-proclaimed ‘Donetsk and Luhansk people’s republics’, in the political persecution of people supporting Ukraine and Ukrainian citizens; and in the ban of a number of Ukrainian nationalist organizations around half a year after the beginning of the war.”

Oleksandr declared hunger strike on 24 May in solidarity with Oleg Sentsov who has been refusing any food since 14 May.  It is next to impossible to concentrate on court hearings after months on hunger strike, and he did at one point suspend the hunger strike.  He is believed to be on it now and looks terrible thin and drawn.