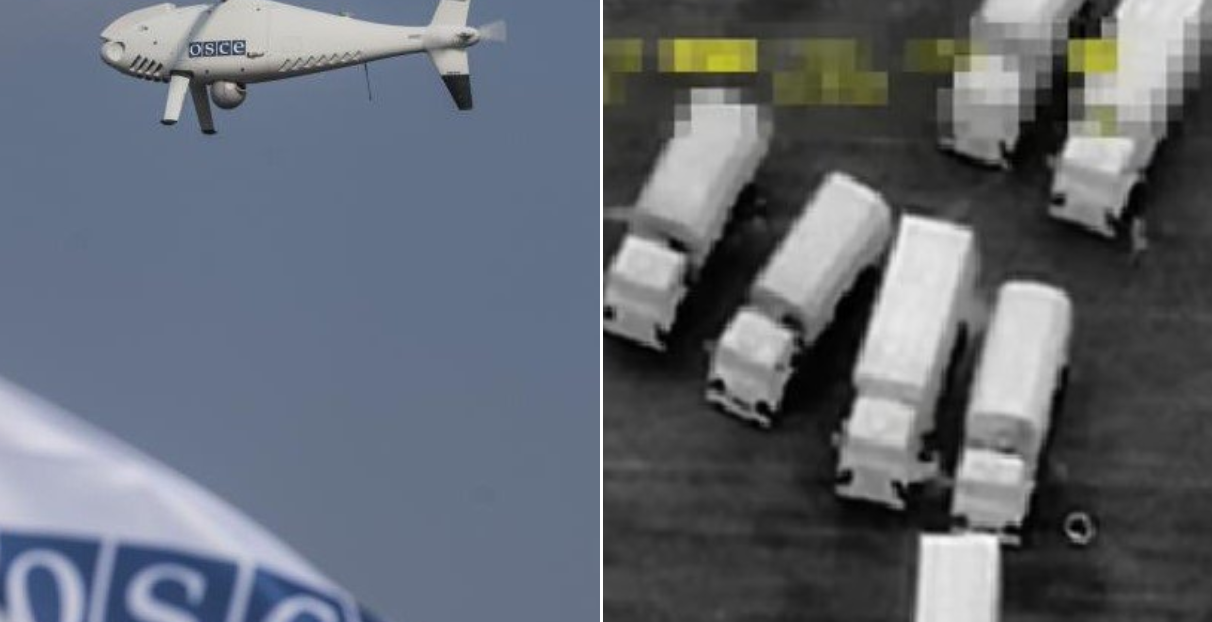 The OSCE’s Special Monitoring Mission [SMM] has reported a second night convoy of Russian KamAZ trucks in a Donetsk oblast area controlled by Kremlin-backed militants.  The convoy of 10 canvas-covered cargo trucks was near the border, but travelling on a dirt road through a place where there are no border-crossing facilities, and was clearly travelling by night to avoid being noticed.

This new convoy sighting was initially mentioned in the OSCE SMM daily report for 5 September 2018, and then again in its ‘FACTS MATTER’ summary on 17 September.

This fact almost certainly does matter, since there is no reason for Russian trucks to travel by night on dirt roads away from border crossings unless they have something to hide.   That something may well be of interest to the UN’s International Court of Justice which is currently examining evidence presented by Ukraine to back its suit against Russia for violating the International Convention for the Suppression of the Financing of Terrorism through its arming, manning and funding of  the military conflict in Donbas.  It should also be of relevance to the International Criminal Court which is considering whether Russian involvement in Donbas constitutes an international armed conflict, as does its invasion and ongoing occupation of Crimea.

There is frustratingly little information about this new sighting by the Mission’s long-ranged unmanned aerial vehicle [UAV], however the reports refer to the previous sighting late at night on 7 August, about which considerably more detail was provided.

The report on 8 August states that: “An SMM long-range UAV spotted convoys of trucks entering and exiting Ukraine via a dirt track where there are no border crossing facilities in the middle of the night.”  At 22.15 on 7 August, the drone recorded a convoy of eight cargo trucks (five KamAZ-4310, the others undetermined) near Chystiakove (non-government-controlled) and travelled around 3.5 kilometres before reaching the Russian-Ukrainian border and turning onto a dirt road.  The two convoys passed each other for around five minutes.

“Each of the convoys separately stopped for about three minutes next to an off-road vehicle that was parked in a field along the above-mentioned dirt track, 1.7km from the border, and again next to two trucks parked at the intersection of the dirt track and the paved road (3.5km from where the convoys crossed the border). At both spots, the occupants of the parked vehicles (the off-road vehicle in the field and the two trucks at the intersection) can be seen interacting with the drivers of each convoy’s lead vehicle. The convoy seen heading westward into Ukraine was observed driving west and finally parking at the southern outskirts of Khrustalnyi (formerly Krasnyi Luch, non-government-controlled, 56km south-west of Luhansk) at 01:16 on 8 August.”

This was clearly a well-coordinated operation involving multiple KamAZ trucks, travelling between Russia and Ukraine, a country that Russia has not declared war against.   It is yet further proof of the lack of any substance to Moscow’s claim that it is not a party to the conflict in Donbas, and that this conflict is a ‘Ukrainian civil war’.

Russia must be challenged over this secret convoy movement by night.  Not because “Kyiv claims…” as all too many media like to say, but because there is hard OSCE evidence of activities for which there is no good explanation.

In early September, Russia’s government introduced a draft bill which will ban military personnel from publishing any information in the media or Internet that reveals their or other soldiers’ location or activities.

Such material has been used to provide convincing proof of Russia’s direct part in the downing of Malaysian airliner MH17 and of its military involvement in Ukraine and Syria, revealed by soldiers on their social media pages (see: Russia moves to silence soldiers and hide evidence of its military aggression against Ukraine )

In May 2015, Russian President Vladimir Putin signed a decree which classifies as state secrets any information about Russian military losses during ‘special operations during peacetime’.  The decree was widely understood as aimed at preventing truthful information being revealed about Russia’s undeclared military engagement in Ukraine  (details here).

Russia was also very careful to restrict the mandate of the sole OSCE Observer Mission which monitors movement at the border.  The title in full specifies its restricted nature, it being only the OSCE Observer Mission at Russian Checkpoints Gukovo and [Russian] Donetsk – some 40 metres of the Ukrainian-Russian border, a tiny percentage of what is currently not under Ukrainian government control (see: Russian tanks entering Ukraine that the OSCE is mandated to miss )..

It is frustrating that only the first of these convoys ever attracted international attention.  The 280 trucks in August 2014 were supposed to be checked near Kharkiv and reloaded onto International Red Cross trucks.  Instead the trucks suddenly changed direction entering the Luhansk oblast through the militant-controlled border.   They may well have been aimed at killing western media interest in later convoys.  Foreign journalists, having discovered that many of the trucks they were shown appeared either half or almost totally empty, never really showed much interest in the subsequent ‘convoys’.

The huge convoy may also have been intended as a decoy.  In August 2014, a Polish TV correspondent was filming a seemingly endless succession of Russian military trucks with men, armed personnel carriers, artillery and anti-aircraft weapons moving towards a part of the Russian-Ukrainian border not under Ukrainian government control.