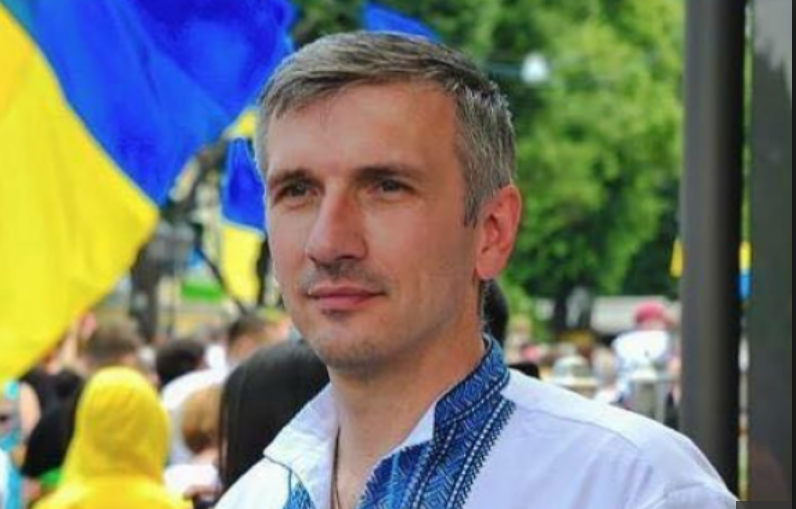 There have been stark warnings about the situation in Odesa following a near fatal attack on Oleh Mykhailyk, an Odesa civic activist and leader of the People’s Power ["Syla Lyudei"] party on 22 September. This is reportedly the fourteenth attack since the summer of 2017 on Odesa activists and journalists known both for their pro-Ukrainian position, and for their opposition to corruption by local officials.

It is no accident that activists and others commenting on the situation have referred to national, as well as public, security.  Odesa was widely expected to fall in 2014, after parts of the Donetsk and Luhansk oblasts, and the fact that Russia failed* to secure effective control then does not mean that it has given up trying.

Mykhailyk in a street near his home late in the evening on 22 September, with a bullet to the left side of his chest.  It is possible that it hit an artery, as he lost a huge amount of blood and throughout the night his condition was too critical to even consider an operation to remove the bullet.

He regained consciousness on Sunday morning, and is reportedly in a stable, though very serious condition.  It is unclear whether he is yet in a state to provide the police with any information about his assailant, but he is under guard in the hospital.

Mykhailyk’s party, as the title suggests, is one firmly focused upon the role of civil society, and he himself is a well-known activist, who had been at a protest against illegal building development just that day.  He has been vocal in criticizing the current Mayor of Odesa, Gennady Truchanov, a controversial politician who figures in in his capacity as member of a Ukrainian criminal gang in the 1990s.  Mykhailyk was, apparently, planning to stand for election in the coming mayor elections.

Dumskaya on Sunday that an investigative team has been set up with this headed by somebody from the Odesa Regional Prosecutor’s Office and also involving the SBU [security service].

While the investigators say that they are considering all possible motives, Mykhailyk’s activist colleagues and the vast majority of people commenting on social media and in the press are assuming that Mykhailyk was targeted because of his activism and / or his fierce opposition to the Mayor and his people in power.

, endorsed by many Odesa-based organizations and media, demands that President Petro Poroshenko call a meeting of the National Security and Defence Council to discuss the situation in Odesa and to create a single unit for investigating all attacks on journalists and civic activists.  It also calls for the dismissal of the  head of the Odesa Regional Police Dmytro Holovyn and his deputies; the head of the Odesa Regional Prosecutor’s Office, Oleh Zhuchenko and his deputies and head of the Odesa Regional SBU Oleksandr Dovzhenko.  With respect to the latter, the authors of the appeal also ask for a systematic investigation to be carried out into all manifestations of separatism in Odesa itself and in the Odesa oblast.  They warn that the situation as it stands now could have extremely adverse consequences for public and national security, making the need for intervention urgent.

Tetyana Gerasimova, a local civic activist and leading member of the 2 May Group which investigated the tragic disturbances and fire on 2 May 2014, that the situation has gone beyond just intimidation.  There is a “fight on for the billions which have already been stolen, but can still be retrieved. And the main issue remains on the agenda, namely control of Ukraine via its southern gate.  Moreover the events of the last year, the attacks on the most active members of civil society beginning with shows that the battle for Odesa has reached a critical point. It is now vital as never before for us to remain together and not be afraid”.

Yuri Khrystensen in turn has given of moves against civic activists over recent months.  These include an orchestrated flood of complaints to Facebook against activists which is believed to have originated from an IT company linked with the Administration of Russian President Vladimir Putin.  While attacks on civic activists and media may have been carried out by criminal elements, Khrystensen mentions pressure on their landlord to refuse to let his property to them, and believes that this was the work of the city authorities.  Whether his explanation that  Russia’s Presidential Administration is playing a major role in this withstands scrutiny remains to be seen, however the combination of different and apparently unconnected forms of pressure does warrant attention.

Perhaps the bluntest warning came from Mustafa Nayyem, the Ukrainian MP who played a pivotal role in initiating the Maidan protests now known as the Revolution of Dignity.  His text, circulated on Facebook and through his blog on Ukrainska Pravda, is entitled ‘.  He writes that the attack on Mykhailyk reflects a dangerous trend, and notes that over the last year and a half there has effectively been an attack on an activist or journalist each month in Odesa, with 14 such attacks since the summer of 2017.

All the victims were united by two factors: “they have systematically and over many years spoken about corruption and violations by the city authorities, led by Gennady Trukhanov.  Secondly, all of them hold pro-Ukrainian views.”

Such statistics for attacks are worse than any other city in Ukraine, as the SBU, Prosecutor General’s Office, Interior Ministry and National Police are well aware.

Nayyem directly blames the President’s Administration for the lack of adequate response.  The problem, he asserts, is that there are soon to be elections and “the local authorities in Odesa have been given “the green light” for any disturbances in exchange for votes at the presidential elections”.

The situation is bordering on the absurd, he writes, when even the OSCE is reporting that local illegal and pro-Russian security structures have seized control in the city, and there remains no adequate response.

Nayyem also believes that the situation in Odesa and the Odesa oblast should be discussed both in parliament and at a session of the National Security Council.

“In 2014, it was a pure miracle that the oblast did not become yet another bastion of separatism, yet four years later it is ‘polite guys’ [a reference to the soldiers who seized Crimea in 2014] from the local authorities who are in front of our very eyes purging the city of all those who can show resistance and act.  Without a systemic solution and discussion at national level of the problem now, in the next parliamentary and local elections we will lose the city once and for all.  Not because it’s not ours, but because our people will leave or fall silent”.

With virtually none of the attacks, either in Odesa or elsewhere in the country, having been fully solved and the culprits brought to justice, the warning urgently needs to be heeded.