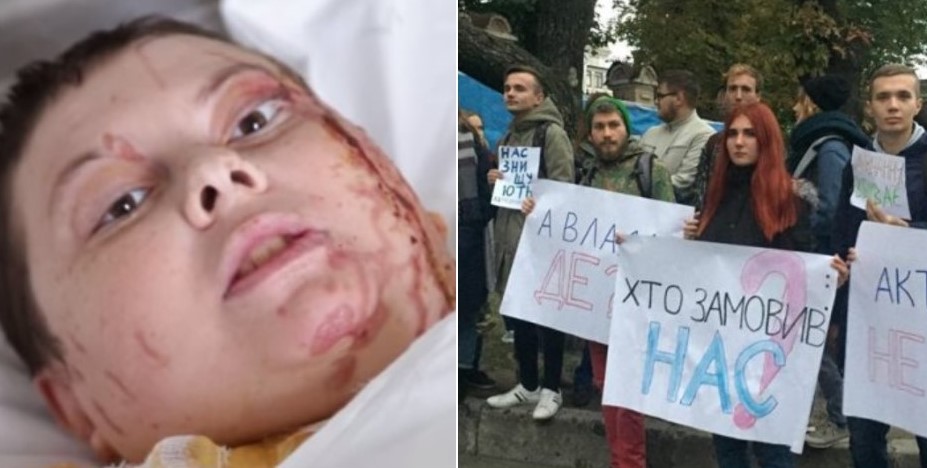 Protests under the banner ‘Silence kills’ have been taking place in many Ukrainian cities over the mounting number of attacks on civic activists and journalists.  The protests began on 27 September just hours after Ukraine’s Prosecutor General Yuri Lutsenko said that civic activists bear part of the blame.

Lutsenko was speaking during a session of the Parliamentary Committee on National Security and Defence on Thursday afternoon.  He reportedly asserted that “the blame for this situation lies not only with bandit elements and poor work of the law enforcement bodies, but also in the atmosphere of total hatred to the authorities which some civic activists stir up.”   He did not name specific activists, but did claim that the planned protest on Bankova St. outside the President’s Administration was a continuation of such policy where the authorities are assumed, a priori, to be to blame.. He said that “all sides need to stop and begin working together for the sake of law and order in Ukraine”.

Lutsenko further asserted that the perpetrators of virtually all attacks on activists have been solved, though went on to say that finding those who ordered such attacks is more complicated.

The Prosecutor General was speaking a day after Kherson activist Kateryna Handziuk gave a moving address from her hospital bed, almost two months after receiving burns to 35% of her body after an assailant sprayed her with sulphuric acid.

She explained that she would be brief as she is not allowed to speak very much.

As mentioned, Lutsenko did not name the activists who, in his opinion, bear some of the blame for the attacks, but did connect them with the protests on Thursday evening.  Among those who organized the protests on 27 September were the civic initiative ‘Who ordered the attack on Katya Handziuk?’ [«Хто замовив Катю Гандзюк?»].

A significant number of Ukrainian human rights groups and activists, as well as media and political organizations endorsed an open statement regarding the attacks on civic or political activists. The statement points to a deterioration in the situation with freedom of speech, freedom of peaceful assembly, as well as with ensuring the safety of such activists.  The statement in places seems somewhat exaggerated, as, for example, where it suggests that Ukraine is again plunging into a time where civic activists are persecuted and where the state does nothing, like under Presidents Leonid Kuchma and Viktor Yanukovych.

Whether or not we are nearing that level, the number of attacks is undoubtedly alarming.  There have been 55 since the beginning of 2017, including the 40 that Handziuk mentioned, over this past 12 months.   She warns that they are likely to become even more brutal.

There have been several arrests over the last two days of those suspected of a near-fatal gun attack on Oleh Mykhailyk from Odesa and of the earlier attack on Odesa Automaidan activist Vitaly Ustymenko.  It is, notwithstanding, difficult to reconcile Lutsenko’s assertion that most cases have been solved with the lists of attacks where even the perpetrators have not been found, let alone those who commissioned the crimes.

Ukrainska Pravda has posted a list of the 55 cases, which Handziuk’s friends from the above-mentioned initiative helped Roman Sinitsyn and Maryna Khromyk to compile.

Some made headlines, such as the abduction and murder of lawyer Iryna Nozdrovska, who had been seeking a just sentence for the man who caused the death of her sister.  Although an arrest was made, serious doubts were expressed as to whether the real culprit had been caught.

Other attacks listed have been on lawyers, environmentalists, and other civic activists.  Some were fatal, like the murder of Vitaly Oleshko on 31 July 2018 in Berdyansk.   The alleged killer has been arrested, however fellow activists are suggesting that he was killed because of his fight with the local authorities and a particular deputy who, they claim, controls Berdyansk.

There are dangers with putting all such cases together in one list, even more so with simply repeating allegations made on social media.  In Oleshko’s case, a person is in custody, and it may become clear who was really behind the attack.

Some cases have remained disturbingly low-profile, such as the death in strange circumstances of 23-year-old activist Mykola Bychkho from Eskhar in the Kharkiv oblast.  Fellow activists have dismissed the police conclusion that he committed suicide and believe that his death was linked with the active role he played in fighting corruption and pollution of the local reservoir by an industrial business with links to the town’s Mayor.

There also does not seem to have been any follow-up to the attack on Andriy Mukha, the lawyer representing victims of a fatal attack on Roma residents in Vilshany (Kharkiv oblast).  This is despite the fact that Mukha asserts that the men who attacked him were led by a local prosecutor (details here).

After a wrong start, there does seem a chance that the people involved in the attempted murder of Handziuk have been caught.  Whatever disputes we may have with Lutsenko’s statistics, it is certainly true that it is much harder to find those who commissioned a crime, especially since those who carry it out may not know themselves.

On the other hand, in cases where an activist is most known, as is Handziuk, for her vehement criticism of allegedly corrupt individuals holding police or prosecutor posts, it is clear that any strange delays and false steps will be viewed with suspicion.  Better to eradicate the grounds for such bad thoughts about the law enforcement bodies than to blame activists for hating them.