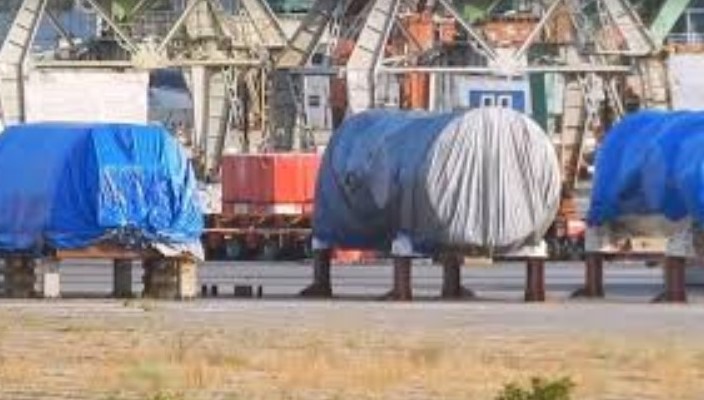 Russia has launched the first reactors of two thermal power stations built in occupied Crimea with Siemens gas turbines provided despite European Union sanctions.  The news comes 15 months after it became clear that the turbines had turned up in Crimea, and over three years after Siemens was first directly warned of the planned scam for bypassing sanctions.  Despite the time that has elapsed, and individual sanctions imposed over the scam, there is nothing to suggest that Siemens Germany has been penalized for its role in the deception.

The two reactors now launched are at the Tavria TPS near Simferopol and the Balaclava TPS near Sevastopol, though apparently a lot of work is still needed before they are fully operational.

Crimea has always been heavily dependent on mainland Ukraine for its energy.  After invading and annexing the peninsula in 2014, Russia announced that it would be building two new power stations in Crimea, though it did not have the turbines.  All western countries were directly prohibited from selling the technology required.

Siemens had a long history of collaboration with Russia, and Siemens CEO, Joe Kaeser made it fairly clear, through his meeting with Russian President Vladimir Putin just after Russia’s annexation of Crimea, that he wanted business as usual.  Sanctions, nonetheless, were and remain binding on the company.

The first report that Siemens Gas Turbine Technologies LLC, the St Petersburg subsidiary of Siemens, was to provide gas turbines for new power stations in Crimea was made in a Vedomosti report on June 30, 2015.   Vedomosti explained that the deal had been reached in Spring with the Siemens turbines officially contracted for a station in Taman in Russia, but in fact destined for Crimea.

Siemens’ only reaction was to assert that it complied with international sanctions.

Then there was a Reuter’s news story from August 5, 2016, which stated, again quoting three unnamed sources, that a Crimea power project had finalized a plan to use Siemens turbines.  Approached by Reuters for comment, Siemens Germany “categorically denied” the allegations and said that “its joint venture is making turbines for a separate plant on Russia’s Taman peninsula.”

Reuters charitably asserted that “there was no suggestion that Siemens knew of or condoned the planned transfer of its turbines to Crimea”.

The journalists went on to say that they had consulted three legal experts who said that there was no precedent for establishing “whether Siemens would be in violation of the sanctions if its Russian joint venture built the turbines for Taman and then a third party sent them to Crimea.”  They did however warn companies to be cautious about technology that could end up in Crimea.

Perhaps there was no precedent, but surely some hard questions were needed when Siemens could not fail to be aware that its Russian joint venture was providing gas turbines to a non-existent power station in Taman.

In fact, a report by Ihor Maskalevych in Ukraine’s Dzerkalo Tyzhnya suggested back in December 2016 that the story about a Taman power station was a front from the outset, aimed at ensuring that Siemens was not accused of violating sanctions. There wasn’t even that much pretence with a tender for building a Taman power station only announced in the summer of 2016, and “ended due to the lack of any bids”.

Maskalevych set out in detail the ruse which he asserted was underway to help Siemens both provide the turbines and not be accused of sanction breaching.

Essentially all the reports, including that from June 2015, proved to be correct

Siemens had persistently responded with denial and its mantra-like repetition that it respected sanctions.

It reacted differently only after Reuters and then others reported that two turbines had been seen in annexed Crimea in July 2017. Since there was no denying that the turbines were in Crimea, Siemens claimed then and continues to assert that it was duped.

It has made all the right noises and doomed legal challenges by, for example, filing a law suit demanding that all four turbines be impounded. This was, predictably, dismissed by a Russian court in Moscow on November 28, 2017.

In August 2017, the EU imposed sanctions on three more Russians, including Deputy Energy Minister Andrei Cherezov, and three Russian companies over the delivery of Siemens’ turbines to occupied Crimea.

In reporting this, on August 4, Reuters noted that “Siemens says it has evidence that all four turbines it delivered for a project in southern Russia had been illegally moved to Crimea.”   No mention was made of the fact that Siemens had been repeatedly warned of this plan from June 2015, but had gone ahead in sending turbines for an non-existent and not even seriously planned Taman power plant.

Despite the Kremlin’s attempts to claim that Crimea was always Russian, the peninsula has always been heavily dependent on mainland Ukraine’s electricity, water and other infrastructure.  With Russia’s mounting repression and persecution, especially of Crimean Tatars, Crimean Tatar leaders Mustafa Dzhemilev and Refat Chubarov initiated a civic blockade of Crimea in September 2015, with specific human rights concessions needed before the blockade would be lifted.  When, in November 2015, electricity supplies were cut, initially for a short time, Dzhemilev stated clearly that Russia needed to free Crimean political prisoners, if it wanted electricity supplies from mainland Ukraine restored,.

The human rights situation has worsened significantly, with over 70 Ukrainian political prisoners, most of them Crimea. Russia’s problems with electricity, water and other supplies to Crimea provided hope that Russia would be forced to end its occupation, or could at least be forced to free political prisoners, etc.  Western collaboration in avoidance of sanctions props up Russia’s illegal occupation and is a treacherous blow to all victims of persecution in occupied Crimea.