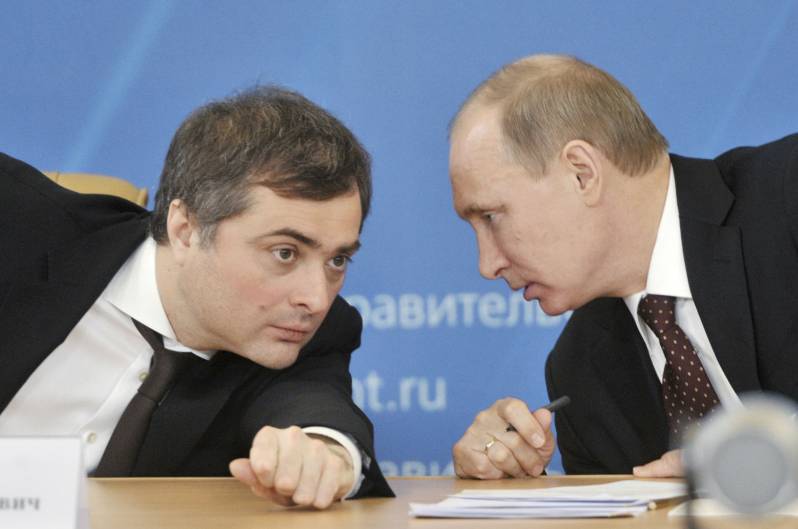 So much for Moscow’s claim that the events in Donbas are a ‘civil war’ in Ukraine that Russia is not a party to.  On 10 October the Russian state news agency TASS reported that Russian President Vladimir Putin’s aide Vladislav Surkov had met, in Moscow, with the current leader of the self-proclaimed ‘Donetsk people’s republic’ [DPR] and “promised an increase in salaries in DPR”.   Putin’s press secretary Dmitry Peskov later made a very half-hearted attempt to distance his employer from the extra cost to the Russian budget, not to other aspects of the report which confirmed Russia’s direct involvement in ‘elections’ which have been widely condemned as in breach of the Minsk Accords.

TASS’s track record of saying exactly what the regime wants reported, and no more, dates back to Soviet times, and it is difficult to believe that this was a mere editorial bleep.  It is noticeable that all Russian state media appear to be now using the rather incomprehensible term ‘proclaimed’ rather than ‘self-proclaimed’ in referring to the so-called ‘Donetsk and Luhansk people’s republics’ [DPR,LPR].  Nor do they, in any other way, indicate that these are illegal formations that even Russia has stopped short of formally recognizing.

The TASS report cites Alexei Chesnakov, who has been called Surkov’s public mouthpiece, as saying that “the parties also discussed issues involved with preparations for the elections of the DPR head and national council, and social issues of Donbas”.  Chesnakov also says that Alexei Filatov, “a high-ranking employee of the President’s Department on cross-border cooperation”, took part and that he is now in charge of “humanitarian and political cooperation with DPR and LPR”, including “on issues linked with the election campaign”.

Pushilin claimed that he had received “guarantees of support from Russia in everything connected with security and increasing citizens’ standard of living”.  He said that a number of measures “of a humanitarian nature” would soon be taken that would make it possible to increase the salary of a whole range of groups of the population”.

It was this assurance that Putin’s press secretary distanced the Kremlin from.  There are, however, two difficulties in assuming that Pushilin was simply engaged in a bit of electioneering.  The first is that he doesn’t need to speak to his ‘electorate’.  This is the man evidently pushed into leader role shortly after the killing of ex-‘leader’ Alexander Zakharchenko and the results of this electoral farce are already known.  The other is that TASS’s title stated that this was a promise from Surkov, the Putin aide believed to have been in charge of events in militant-controlled Donbas since the conflict began.

Novosti Donbassa has followed reports in the Russian media suggesting that Surkov’s department is facing cuts and that he himself may be demoted.  Alexander Khodorkovsky, nominally a rival of Pushilin’s and one of the people in ‘DPR’ who has openly spoken of the major financial and other role Russia plays, is quoted as delighted by the TASS report.  He writes: “Moscow officials are gradually stopping any pretence and beginning to call things by their correct name – they promise an increase in salaries as those who hold the right to do so, they determine who will head the territories, who not, and they’re no longer hiding this”.

Certainly the report could not have been more explicit about Russia’s role.  Both Moscow and ‘DPR’ have been eager to blame Ukraine’s Security Service, together supposedly with help from the USA, for Zakharchenko’s death in a bomb blast on 31 August,  Doubts about this version are aroused, and not only because of the near impossibility of carrying this off for logistical reasons.  There is also the extraordinary speed with which Pushilin, a more malleable person linked with Surkov, gained control, with people close to Zakharchenko forced to flee.  Perhaps most suspect is the fact that these ‘elections’ were being discussed for some time before Zakharchenko’s killing, though clearly in breach of the Minsk Accords.  The somewhat fictitious ‘vacuum’ that the killing purportedly left gave an apparent excuse for staging these new election stunts.  The supposedly interim leaders of ‘DPR’ and ‘LPR’ [Leonid Pasechkin] announced ‘elections’ on September 7, with Chesnakov, as Surkov’s mouthpiece, making it quite clear that these ‘elections’ had been decided in Moscow.

The EU reacted swiftly, saying that they “run contrary to the spirit and letter of the Minsk agreements, which have specific provisions regarding the organisation of local elections in that region”.   The statement rather euphemistically ends by saying that they “expect Russia in particular to make full use of its influence on the separatists in this regard.“

If Zakharchenko’s criminal background and machinations as ‘DPR leader’ might occasionally have made him a little unpredictable, neither he nor other militant leaders ever took any major steps without instructions from Moscow.  Zakharchenko’s death is being touted as justification, but the ‘elections’ were assuredly decided in Moscow.  As in 2014, Moscow will also doubtless provide the pro-Kremlin ‘observers’ who can be relied upon to praise their ‘democratic’ nature.  In November 2014, the reality proved so gross and condemnation from the West so unequivocable that at the last moment even Russia stopped short of recognizing their ‘outcome’.  It remains unclear why Russia is pushing them again now.