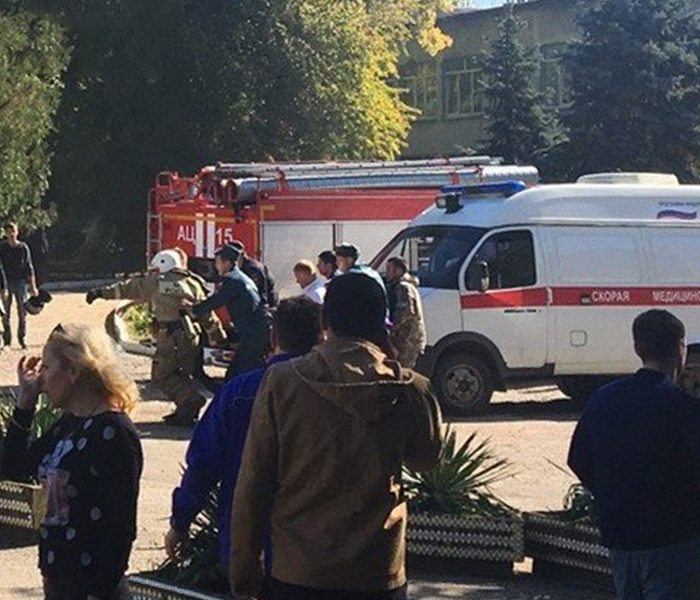 As of late on 17 October, 19 people are known to have died from a mass shooting in Kerch, Russian-occupied Crimea, including the 18-year-old believed killer, Vladislav Roslyakov, a fourth-year student at the Kerch Technical College where the tragedy took place.  His motives have yet to be ascertained, however Russia’s Investigative Committee has now changed its qualification of the crime from an act of terrorism to multiple homicide.  This was after Russian media reported a top occupation regime official as claiming that Ukraine was behind the terrorism, and that the culprit allegedly “looked like a Tatar ”.  The requalification is also in marked contrast to the ever-mounting number of Ukrainians arrested since Russia’s invasion of Crimea on ‘terrorism’ charges despite the lack of any act of terror, or even evidence that one was planned.

It is understandable that in the confusion after the explosion and shooting that there should have been such conflicting reports about what was happening, and the number of victims.  It is unfortunately no less predictable that very many people both within Crimea and outside should have responded with identical concern that this was to be an excuse for new repression in the occupied peninsula.

Photos are now available of Roslyakov holding a hunting rifle which he apparently turned on himself, after killing 18 teachers and students, and injuring up to 50 others.

Krym.Realii has probed the rather conflicting ideas about Roslyakov’s likely motivation, based mainly on his posts on social media.  His VKontakte page contains anti-fascist slogans and indicates an interest in hard rock, possibly also support for left-wing ideas,  The same page has a portrait of Russian President Vladimir Putin and a repost from a page entitled ‘This country can’t be beaten’, with symbols of the so-called ‘Novorossiya’, linked now with the Kremlin-controlled pseudo ‘Donetsk and Luhansk republics’   The term Novorossiya was first used by Putin in April 2014 at a time when there was every indication that Russia was hoping to seize control of at least the Kharkiv and Odesa oblasts as well, both of which Putin placed in this alleged ‘Novorossiya’.

Viktoria Veselova, writing for Krym.Realii notes that Roslyakov also posted a sarcastic photo of Putin together with the head of the Russian Orthodox Church, Patriarch Kirill.

It may be that the young man had personal grounds for a grudge against the college, or particular students.

Nothing like this has ever happened in Crimea before, and after over four years of Russian attempts to push the idea that Ukraine and Ukrainians pose a threat and are planning acts of ‘terrorism’ and ‘sabotage’, it was understandable that the initial horror was combined with apprehension, as well as suspicion that a terrorist act could have been staged to justify further acts of aggression.  The concerns were only exacerbated by the comments made to the Russian state-controlled Rossiya 24 by Vladimir Konstantinov, speaker of the de facto Crimean Parliament.   While saying that they were awaiting official information, he clearly blamed the Ukrainian authorities, asserting that “all evil falling upon Crimean land comes from the Kyiv authorities.  I’m convinced that the wind blows from there”.

The Russian website Lenta.ru reported after it was already clear that one person had carried out the shooting that the suspect “looked like a [Crimean] Tatar”.  This was allegedly from “a source within the law enforcement agencies” and was later corrected, presumably after the absurdity of this allegation became evident from the photos of Roslyakov.

This immediate attempt to claim a ‘Crimean Tatar’ culprit is nothing new, especially under Russian occupation, and rightly elicited a strong statement from the Moscow Community of Crimean Tatars.  They condemned those irresponsible media who had, in the face of human grief and the death of children, seen fit to use inadmissible methods which incite enmity.

Since the arrests of Ukrainian filmmaker Oleg Sentsov, civic activist Oleksandr Kolchenko and two other opponents of Russia’s annexation of Crimea, Russia has been trying to justify its aggression and the fact that the promised prosperity has not eventuated by blaming Ukraine and individual Ukrainians of ‘sabotage’ and ‘terrorism’.  The Russian state media also regularly uses fake video footage and downright lies to present the occupying state’s persecution of particular Crimean Tatars or of Muslims for their faith as about ‘fighting terrorism’.