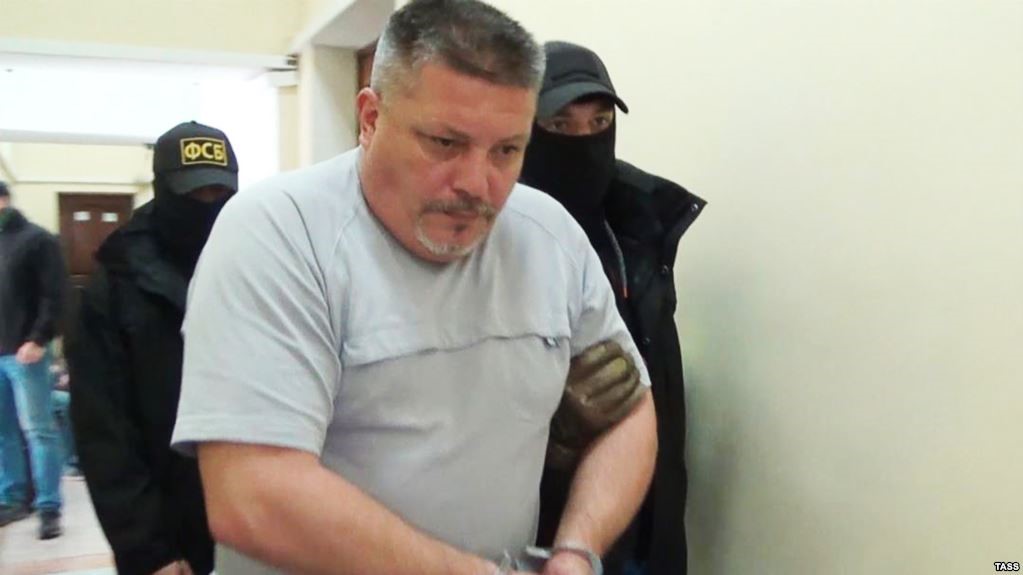 Dmytro Shtyblikov, the Ukrainian academic accused by Russia of organizing a supposed ‘saboteur plot’ in occupied Crimea, has been moved from Oryol prison colony No. 6, with his lawyer not told where he has been taken .  The move may be due to major riots in that prison, however it is also possible that his transfer is linked with Russia’s latest attempt to carry off a ‘trial’, without a shred of evidence, against two other Ukrainians: Volodymyr Dudka and Oleksiy Bessarabov.  Previous attempts have failed, and new hearings are scheduled for 29-31 October.

It is known that there were major confrontations on 6 October at the prison colony over torture and beating, with prisoners hanging a banner from a window reading “Save us”.  The authorities brought in a special force unit [spetsnaz] and Rosgvardia  [National Guard] fighters. Around 200 prisoners are understood to have taken part in the rebellion, and some of them declared hunger strike.  Around 40 people were injured, with at least one man ending up in emergency care.

It was after this that Shtyblikov was moved, although he himself has spent the last six months, since being sent to the prison, in solitary confinement and the riots would not have affected him.  His family only learned that he had been moved, supposedly last week, after his lawyer tried to visit him on 23 October.

It is possible that he is being brought to Sevastopol.  If so, this could be for the ‘trial’ of Bessarabov and Dudka, due to begin on 29 October.  Whether, in that case, he would agree to give testimony remains to be seen.

It will be two years on 9 November since Shtyblikov, Bessarabov and Dudka were arrested, and almost a year since Shtyblikov was sentenced to five years’ maximum security imprisonment.  The charges bore no scrutiny, with this almost certainly the reason why Shtyblikov was prevented from seeing an independent lawyer for over a year. There are very strong grounds for believing that physical or psychological pressure was used to get him to agree to ‘admit guilt’.  His ‘trial’ in the Sevastopol City Court on 16 November 2017 took all of 50 minutes, with the ‘court’ under presiding judge Gennady Vladimirovich Nikitin taking just five minutes to convict him of planning ‘sabotage’ under Article 281 of the Russian criminal code and of illegally procuring and holding ammunition and explosives (Article 222.1).  As well as the prison sentence, he was fined 200 thousand roubles.

The ‘weapon’ triumphantly displayed during the FSB videos of Shtyblikov’s arrest and the search of his home on November 9, 2016, were airguns from the academic’s sporting hobby.  The FSB operational video circulated to the Russian media showed Shtyblikov being roughly pinned down and handcuffed by FSB officers, and then in his home.  The camera focused on the Ukrainian trident, a Ukrainian flag on the wall, and Dmytro Yarosh’s ‘Right Sector’ business card.  This worked on Russian propaganda channels, but was greeted with derision elsewhere.  An identical card had first been produced by Russia as ‘incriminating evidence’ in April 2014, after supposedly being pulled quite intact from a totally gutted out car.

Shtyblikov is one of five men arrested in the Russian FSB’s second supposed ‘Ukrainian saboteur’ case in 2016.  He was named as the supposed organizer of the mystery sabotage plot for which there was no evidence.

Three men were arrested on Nov. 9, 2016: Shtyblikov and Bessarabov, who are both Black Sea Fleet military analysts, and retired Ukrainian military officer Volodymyr Dudka.  The FSB did not give names, but claimed the men were “members of a sabotage – terrorist group of the Ukrainian Defence Ministry’s Central Intelligence Department” who were planning acts of sabotage on military and other infrastructure”.  Two much younger Crimeans  - Oleksiy Stohniy and Hlib Shabliy were arrested 10 days later.  Given that Russia may be hoping to use testimony from Shtyblikov against Dudka and Bessarabov, it is worth noting that both Stohniy and Shabliy were shown on FSB videos ‘confessing’ to actions linked with the FSB’s ‘sabotage’ claims about the first three men arrested.  The supposed arrest of Stohniy is known to have been a stunt (since he was seized at night) and in both cases, the men were ‘convicted’ of offences that bore little or no resemblance to their videoed ‘confessions’.

It is telling that of the first three men seized, it was only Shtyblikov, then 47, who was systematically prevented from seeing any (independent) lawyer, and he is the only one who agreed to ‘admit guilt’.   Dudka, who was alone in being allowed to see a proper lawyer during the first month of detention, immediately stated that his ‘confession’ had been extracted through duress and threats to his family.

Bessarabov’s family are largely avoiding talking with anybody, including the other men’s families, although the three men do know each other.  For a decade until February 2014, Shtyblikov and Bessarabov worked together in the Nomos Centre for furthering research into geopolitical issues and Euro-Atlantic cooperation in the Black Sea Region.  Shtyblikov was the Director of International Programs while Bessarabov, who is now 43, was Deputy Editor of the journal ‘Black Sea Security’.  Dudka retired from his post as military sea captain for health reasons back in 2009.  He recently turned 54 in the Simferopol SIZO [remand prison] and is suffering from a number of fairly serious medical conditions. .

There have been several attempts to hold a ‘trial’ of Dudka and Bessarabov, with these having failed, even though the FSB has managed to get all the hearings behind closed doors.  The secrecy enables concealment of the brutal fact that there is nothing against the men at all.  Even if Shtyblikov has been ‘persuaded’ into testifying, this can change nothing when he was prevented from seeing a lawyer during the critical period, and when there is effectively no way of learning what kind of pressure has been brought to bear against him.