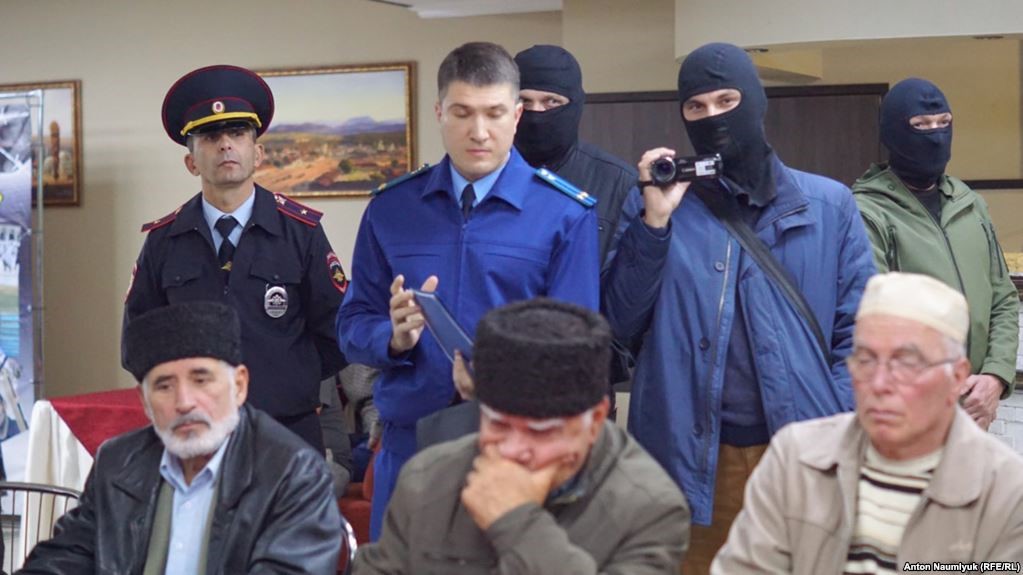 Russian enforcement officers have carried out a second raid on a meeting of the human rights initiative Crimean Solidarity, with the actions of the masked men this time evidently aimed at instilling fear among all those present.  Two Crimean Tatar lawyers Lilya Hemedzhy and Edem Semedlayev were issued ‘warnings’, as was civic activist Dilyar Memetov, one of the coordinators of Crimean Solidarity.  Indeed, the brazen nature of the intrusion and of the officers’ ostentatious photographing of the participants elicits concern that this was a warning to all those who demonstrate solidarity with the victims of persecution.

At the meeting in Simferopol on 27 October, officials from the de facto prosecutor’s office turned up, together with unidentified individuals in masks, who later proved to be from the so-called Centre for Countering Extremism, and some uniformed police officers.  The masked men hovered around photographing people, while the ‘prosecutor’s office’ officials accosted Hemedzhy, Semedlyaev and Memetov, who is the son of political prisoner, Remzi Memetov.

They claimed to have information about single-person pickets which the two lawyers and Memetov were organizing.  Semedlyaev has posted the ‘warning’ in his name, which he considers to be pressure on him as a lawyer.  The ‘warning’ is of the inadmissibility of infringing Russia’s law on ‘extremism’ and on protests.  It claims that the ‘prosecutor ‘has received information that Crimean Tatar activists supporting Hizb ut-Tahrir, the peaceful pan-Islamic organization which it calls ‘terrorist’ are planning “mass protests under the guise of single-person pickets” in support of people suspected of involvement in Hizb ut-Tahrir.

This surreal nonsense contains two critical words: “single-person pickets’.  These are the only forms of protest according to Russia’s repressive legislation that are totally legal and require no permission.  The term “mass protests under the guise of single-person pickets” makes no sense.

The Russian occupation regime has, however, long flouted its own legislation and prosecuted people for single-person pickets.  On 14 October 2014, in response to the arrests of six Crimean Tatars, most of whom were active in Crimean Solidarity, over a hundred single-person pickets were held throughout Crimea with people holding placards with messages such as:  “Our children are not terrorists!”;  “Give children their fathers back, Crimean Tatars are not terrorists!” and “Fabricating criminal cases – it’s this that’s TERROR”.   49 people were detained that day, but eventually released which would not have happened had any committed an offence according to Russian legislation.

Despite this, over the following months at least 86 of the picketers were prosecuted and fined hefty amounts for supposed infringements of the rules for holding a picket.  The argument applied is that since there were many such pickets, then together they constituted an ‘unauthorized public event’.  As Ilmi Umerov, Crimean Tatar leader and himself a victim of political persecution, noted: “It turns out that if there are several INNOCENT people, then they’re GUILTY. This is the logic of occupiers and bandits.  The law is meaningless.”

During the visitation on 27 October, the ‘prosecutor’’ tried to extract ‘explanations’ from Hemedzhy, Memetov and Semedlyaev.  Memetov later told Krym.Realii’s correspondent that he had refused to provide any such ‘explanation’  since he did not understand what the warning was in connection with and why it had been presented to him.  This, he said, is the latest attempt at intimidation against Crimean Solidarity  intimidation and pressure on Crimean Solidarity.  It was also against the Crimean Tatar people, he added, “because we see how many people came today.  These are people who want to show support”.

Crimean Solidarity was launched in 2016 after the arrests of human rights activist Emir-Usein Kuku and three other Crimean Muslims.  The monthly meetings are attended by people of quite different ages – the parents, wives and children of political prisoners; lawyers; journalists and other members of the community.

Russia is very clearly unnerved by such solidarity and is applying different forms of repression against it.  The first aggressive raid was carried out by armed and masked Russian OMON riot police, some with dogs, of a meeting in Sudak on 27 January 2018.  The officers cordoned off the entire building and blocked all exits, claiming that they had received ‘a report’ that there was a large gathering of ‘suspicious-looking people’ who had taken a lot of bags into the hall and possibly weapons.  They then proceeded to carry out what was effectively a search without any warrant.  They brought police dogs into the hall where there were many young children, as well as elderly people.

The repressive measures applied are, tragically, not confined to administrative arrest or fines.  As mentioned, almost all of the six men arrested on 11 October 2017 were active in Crimean Solidarity.  They have been in custody ever since and are facing huge sentences in the latest of Russia’s conveyor belt prosecutions of Muslims on charges of involvement in Hizb ut-Tahrir.

Russia’s Supreme Court has never explained why it declared an organization not known to have committed any act of terrorism or violence anywhere in the world ‘terrorist’.  The prosecution in such ‘trials’ do not need to prove that the defendants committed an act of terrorism, or even, in fact, that they committed a crime at all.  The charges in all these cases are based solely on the allegation that the men are involved in Hizb ut-Tahrir, with the ‘evidence’ for such involvement provided by ‘secret witnesses’ or questionable ‘expert assessments’ of comments on religious, political or social issues.

Of the six men arrested on 11 October 2017, Suleyman (Marlen) Asanov has been designated the role of ‘organizer’ of a Hizb ut-Tahrir ‘cell’ (under Article 205.5 § 1 of Russia’s criminal code), with this carrying a sentence of up to life imprisonment. The other five men:  Ernest Ametov;  Memet Belyalov; Timur Ibragimov; Seiran Saliev and Server Zekeryaev are accused of ‘involvement’ in this  (under Article 205.5 § 2 – from 10 to 20 years’ imprisonment).

Any faint flicker of doubt that this was a systematic attack on Crimean Solidarity was dispelled on 21 May 2018 with the arrest of Server Mustafaev, one of the coordinators of Crimean Solidarity and Edem Smailov who has also been involved in the civic initiative.  They are now also facing charges in this same ‘Hizb ut-Tahrir case’.

Another Bakhchysarai Crimean Solidarity activist and civic journalist Nariman Memedeminov has been in custody since 22 March 2018.  He is charged solely in connection with absolutely innocuous videos posted on YouTube in 2013, well before annexation.  In the videos in question he condemns Russia for persecuting Muslims and expresses his views about the revival of the Khalifate.  The FSB are claiming that this falls under Article 205.2 § 2 of Russia’s criminal code –‘public calls to carry out terrorist activities, public justification of terrorism or propaganda of terrorism’.

In each one of these cases, large contingents of masked men in camouflage gear flourishing automatic rifles have burst their way into homes with young children who see their fathers forced to the ground and then taken away in handcuffs.  Crimean Solidarity was urgently needed, since as well as the psychological trauma inflicted, the mounting arrests have generated other practical problems. The imprisoned men are often the sole breadwinners, and the initiative has helped coordinate assistance for the families.