Russia’s censor threatens Ukrainian newspaper for explaining that conscription of Crimeans is a war crimeRussia doubles war crimes against Crimeans forced to serve in occupier’s army10 thousand Crimeans forced to serve in Russian occupying armyCrimean Jehovah’s Witnesses told to renounce their faith or serve in occupiers’ armyRussia breaches international law forcing Crimeans to serve in occupying armyAt least 52 Crimeans prosecuted for refusing to serve in Russian occupiers’ army‘Stand up for your convictions, even if you stand alone!’ Anti-war activities in Russia, 3-9 OctoberRussia heavily targets Crimean Tatars in forced mobilization in occupied Crimea Russia sends forcibly mobilized Ukrainians from occupied Donbas to die as ‘live bait’ at the frontlineCovert mobilization and Ukrainian conscripts from occupied Crimea sent to die in Russia’s war against Ukraine Russian legislative changes would mean school leavers can officially be sent to fight in Ukraine Desperate plea from the wives of Donbas men seized and sent to fight Russia’s war against UkraineInternational experts issue stark warning of Russian genocide against UkraineRussia deports Ukrainians to occupied Donbas, forcing them to fight its war against Ukraine Grave of more tortured victims of Russian invaders found in Kyiv oblast Russia is forcibly ‘mobilizing’ Ukrainians from occupied territory to fight its war against Ukraine Almost 400 Russian war crimes already documented in Ukraine Ukraine Should Ratife The Rome Statute Of ICC — Euromaidan SOS appealMass graves of the Ukrainian civilians Russia claims it is not killingRussia is forcing Ukrainians from occupied Crimea and Donbas to fight in its invasion of Ukraine
• Topics / Army
• Topics / Human Rights Abuses in Russian-occupied Crimea

Russia sends Ukrainians from occupied Crimea to fight in Syria 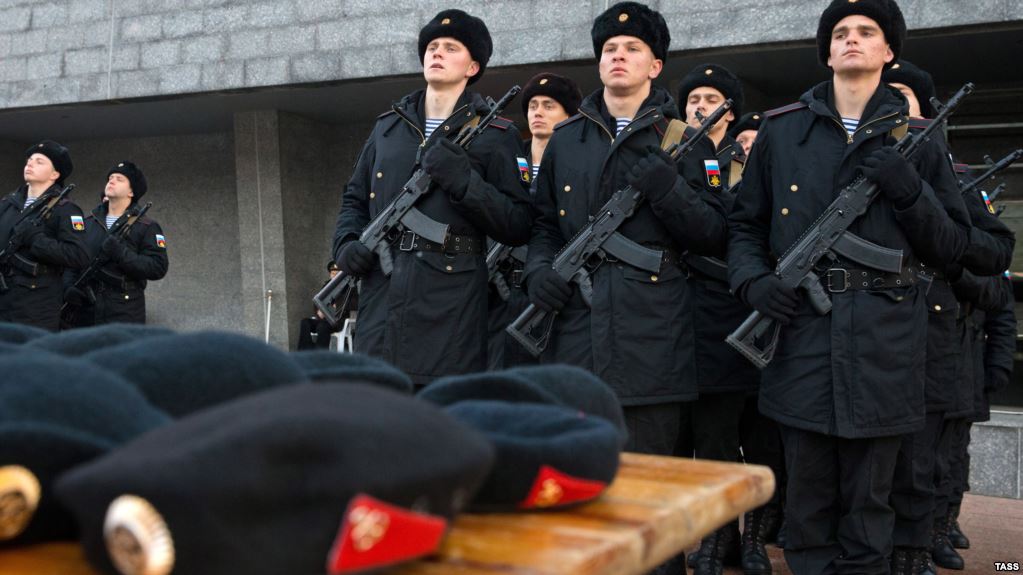 Ukrainian human rights groups evidence to the International Criminal Court of Russia’s war crimes in forcing young Crimeans to serve in the occupying state’s army.  The proof compiled includes evidence that some young men have been sent to Syria as part of Russia’s military intervention on the side of Syrian dictator Bashar al-Assad.

There is nothing to suggest at present that Russia is sending young men to Donbas, however in 2014 there were a number of cases in Russia where young conscripts were effectively forced to sign contracts ‘agreeing’ to go to fight in Ukraine.

The Crimean Human Rights Group has been monitoring and collecting evidence of Russia’s imposition of conscription on occupied territory since it began in the Spring of 2015.  Now, together with the Ukrainian Helsinki Human Rights Union and Ukraine’s Prosecutor for the Autonomous Republic of Crimea, it has presented its findings to the International Criminal Court [ICC], though they do warn that consideration of these crimes may take years.

There have been seven call-ups so far since Russia annexed Crimea, with at least 12,094 young men conscripted, with the number increasing every year. This autumn, three thousand young men will be called up.

That this is in flagrant breach of international law is not in dispute.  Back in 2016, the ICC’s Chief Prosecutor concluded that Russia’s occupation of Crimea constituted an international armed conflict, one falling within its jurisdiction.  The behaviour of an occupying state is regulated by the Fourth Geneva Convention and other international documents, and expressly prohibits conscription

Article 51 of the , for example, states that: “The Occupying Power may not compel protected persons to serve in its armed or auxiliary forces. No pressure or propaganda which aims at securing voluntary enlistment is permitted”.

Conscription is a major concern for many young men and their parents, and there have  that some of them have been placed under pressure to renounce their Ukrainian citizenship.  This is also a war crime, with the 1907 Hague Convention  unequivocally that “it is forbidden to compel the inhabitants of occupied territory to swear allegiance to the hostile Power.”

Oleksandr Sedov that they have gathered 165 legal documents linked with carrying out conscription in Crimea, as well as 199 publications confirming both the fact of such conscription and the numbers of young people called up.

They have also carried out an analysis of almost two thousand pages in social media.  Through social network entries, they have found several dozen call-up summonses signed by the military recruitment commissions on occupied territory. As mentioned, the most disturbing are several medals awarded for taking part in Russia’s military action in Syria.

Russia claims that there is no compulsion, however this is evidently untrue, as demonstrated by the fact that there have so far been at least 40 criminal prosecutions for trying to avoid the draft.

Sedov explains that four prosecutions were terminated, but in at least three of the cases, only on condition of public ‘repentance’ and a promise to do military service.

33 sentences have so far been passed (three others are pending), with one an 8-month suspended sentence, the others fines.  It should be stressed that this penalty is likely to turn into a real prison sentence if the person still refuses to serve in the occupier’s army.

It is also almost inevitable that young Jehovah’s Witnesses will be imprisoned for refusing to do military service.  At least two Crimean Jehovah’s Witnesses have been ordered to provide ‘proof of change of faith’ in order to be eligible for alternative civilian service. One young man received a summons from the Bakhchysarai military recruitment commission for June 14, 2017. The document included a handwritten demand that he present “documents confirming change of religion”.  This was after he had visited the office on June 9 and been told that he could only do alternative civilian service if he renounced his faith.

Russia is thus reinstating religious persecution of the Soviet regime and is doing so on illegally occupied Ukrainian territory.