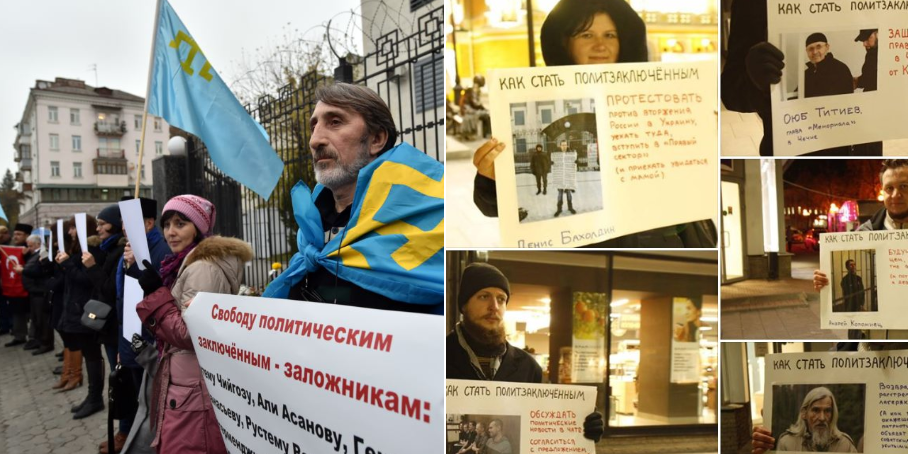 Placards above from top left clockwise explaining how the people in the photo became political prisoners.  Denis Bakholdin for protesting against Russia’s aggression against Ukraine; Oyub Titiev for defending human rights in Chechnya from Ramzan Kadyrov; Andriy Kolomiyets for taking part, as a Ukrainian, in Ukraine’s Euromaidan; Yuri Dmitriev, for restoring the names of executed labour camp prisoners; the ‘Novoye Velichiye Case’ for discussing political issues on social media chats.’

Russia’s renowned Memorial Human Rights Centre has once again marked Remembrance Day for the Victims of Political Repression on 30 October by publishing new lists of political prisoners currently held in Russia or Russian-occupied Crimea.  There has been a massive increase, from 117 a year ago to 195 now, with Memorial warning that the real number is likely to be very much higher.

Russia is certainly holding far more Ukrainian political prisoners than the list would suggest.  Memorial HRC is right to wish to analyse the charges and evidence, if any, backing them, before drawing conclusions, though in many cases such analysis is largely a formality.  Russia is now holding over 30 Ukrainian Muslims from Crimea prisoner on charges of involvement in the peaceful pan-Islamist movement Hizb ut-Tahrir which is legal in Ukraine. Since Memorial considers all those convicted merely of involvement in Hizb ut-Tahrir to be political prisoners, and with respect to Crimea also points out that Russia is in breach of international law by applying its legislation on occupied territory, it is merely a question of time before all Crimean Muslims in custody are declared political prisoners.

Memorial’s list does not include several Ukrainian political prisoners, presumably because of the secrecy Russia maintained and the use of pressure to force the men into agreeing to admit to the charges.

Valentin Vyhivsky, for example, was abducted from Simferopol in September 2014 and taken to Lefortovo Prison in Moscow where he was held incommunicado for several months and never had a proper lawyer until after he had been convicted of mystery ‘spying’ and sentenced to 11 years’ imprisonment.

Ukrainian academic Dmytro Shtyblikov was also prevented from seeing a lawyer and placed under immense pressure until he agreed to ‘plead guilty’ to planning acts of sabotage in Crimea.

The list does not include Mykola Shyptur, Maidan activist and probably Russia’s first Ukrainian political prisoner who was probably arrested, charged and convicted on absurd charges because the inadvertent involvement of a police officer made it difficult for him to be abducted and killed (details here)

It also omits Oleksiy Sizonovych, a pensioner who was abducted by Luhansk militants and almost certainly tortured both in Ukraine and then after having been illegally taken to Russia.  He was sentenced to 12 years’ after being forced into admitting to the charges in the absence of a real lawyer and without any contact with members of his family..

It will soon be one year since the FSB and Russia’s National Guard tried to arrest Vedzhie Kashka, 83-year-old veteran of the Crimean Tatar national movement, and instead caused her death.  Four men in their fifties and sixties remain imprisoned, although the charges against them are nonsensical  and the entire ‘case’ is clearly being used to try to discredit the Mejlis of the Crimean Tatar people which Russia has been ordered by the International Court of Justice to stop persecuting.

The above is not intended as criticism of Memorial HRC, but as an indication of how many prisoners’ cases may not be identified as political because Russia maintains unwarranted secrecy, and / or uses inadmissible pressure to force them to admit to crimes they never committed. Such pressure in very many cases includes direct methods of torture.

Over the last year, the FSB have also resorted to shocking methods against young Russians.  In the ‘Novoye Velichiye’ case, for example, around 15 young people are facing long sentences on charges of organizing an ‘extremist’ group, although it appears that the said group was effectively created by an FSB officer who used forms of provocation and deceit to ‘incriminate young people who would otherwise have simply continued expressing politically critical opinions on social media.

Since 2014, Russia has systematically persecuted its own citizens, as well as Ukrainians for expressing critical views about its annexation of Crimea and military aggression against Ukraine.

It is also now persecuting historians who have uncovered the crimes and the mass graves of the victims of Stalin’s Terror.  Remembrance Day for the Victims of Political Repression coincides with the anniversary of the mass execution by quota of Ukrainian, Russian and other prisoners sent to the notorious Solovki Labour Camp during the worst months of Stalin’s Terror.  From 27 October to 4 November 1937, 1,111 prisoners were executed by the NKVD, including 289 Ukrainian writers, playwrights, scientists and other members of the intelligentsia.  Their remains lie, together with those of nearly nine thousand victims, at the Sandarmokh Clearing in Karelia, near the Russian border with Finland.

It was historian Yuri Dmitriev and colleagues from the Memorial Society who uncovered the mass graves at the Sandarmokh Clearing in Karelia, with Sergei Koltyrin, the Director of a local museum working closely with them.

Both Dmitriev and Koltyrin are now imprisoned on charges clearly aimed at discrediting them and Memorial.  The arrests have coincided with a brazen attempt to rewrite the history of Sandarmokh and place in question the proven fact that the graves there are those of thousands of victims of the Terror  (See Russia arrests second historian of Stalin’s Terror).

Memorial HRC reports that about half of the political prisoners it has identified are being persecuted for their religious beliefs.  It suggests that here the real number could be 3-4 times higher.  The figures are also set to rise with Russia’s persecution of Jehovah’s Witnesses and Seventh Day Adventists gaining pace.  It is frighteningly obvious that Russia’’ FSB are using the same tactics against Crimean Muslims and Jehovah’s witnesses, with such persecution requiring very little effort for the enforcement officers and likely promotion or other perks for good statistics on fighting fictitious terrorism or ‘extremism’ (details here).