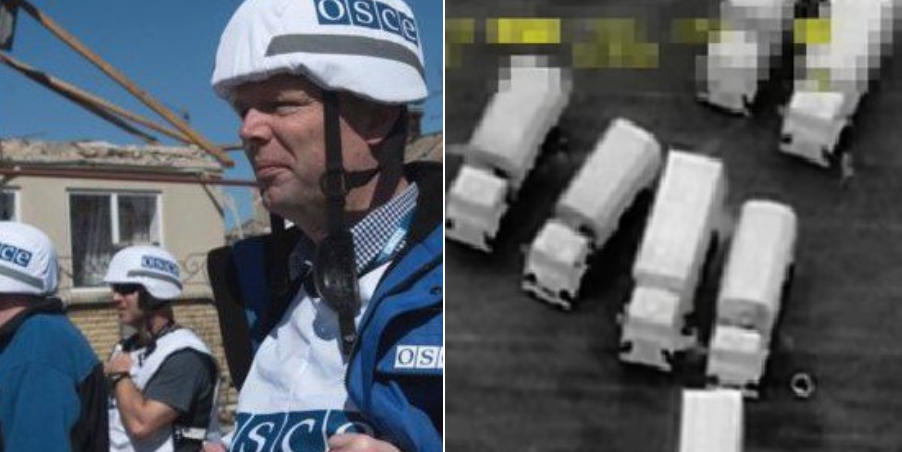 Donbas residents have made it quite clear to the OSCE’s Special Monitoring Mission to Ukraine [SMM] that “this is not their conflict, and they don’t understand why it is continuing”.  This was strongly stressed by Alexander Hug in final interviews before leaving his post as the OSCE SMM Principal Deputy Chief Monitor on 31 October.  Hug also emphasised that the SMM is not mandated to draw conclusions, only to record the facts, however those facts do speak for themselves, including with respect to Russia’s participation in the conflict.

Hug has ended his term in Ukraine where he has led the OSCE’s mission since the spring of 2014.  He is frustrated that he is leaving a conflict that is still ongoing, and stresses that those responsible for it can issue the orders to stop it at any moment.

The BBC Ukrainian Service began their interview by referring to in the Foreign Policy interview that caused some indignation last week.  Many interpreted one paragraph, perhaps unfairly, as Hug’s denial of direct proof of Russian interference in the conflict. In fact, this had not been Hug’s intention and the relevant passage was removed from the text.

Hug had clearly then repeated the SMM position and did so again in the BBC Ukraine interview, saying: “It is important to understand that the task of the OSCE SMM is to establish the facts. It doesn’t carry out an investigation, it’s not the police and is not involved in gathering evidence.  It provides the facts and those facts speak for themselves”.

Some of these concern particular types of weapons that we have seen in non-government controlled areas”.  Hug mentions only three names, though in fact a number of such systems has been observed.  On 3 June this year, an SMM UAV [OR drone] “spotted two box-body military trucks (KamAZ-4310) with an antenna belonging to a TORN radio intelligence system near Debaltseve.

On 28 July, “an SMM mini-UAV spotted four distinct electronic warfare systems (a Leer-3 RB-341V, a 1L269 Krasukha-2 and RB-109A Bylina, and an anti-UAV system, Repellent-1) near Chornukhyne (64km south-west of Luhansk), all seen for the first time by the SMM.”

“We also record the districts where the armed formations are carrying out exercises.  We have seen a lot of heavy artillery: tanks, minethrowers, multiple launch rocket systems.  We have published photos of this technology.

Over the last three months, we have reported at least nine cases when military convoys have entered or left Ukraine, sometimes with weaponry.

We have on several occasions spoken with people who said that they were members of Russian units, in the Russian Armed Forces who had taken part in fighting in Ukraine.

We have even met people who said that they were from a particular brigade, which they named and which had been fighting in Ukraine.”

You can take decisions on the basis of these reports, he adds, or you can ignore them.

It is to be hoped that they will not be ignored, especially by the UN’s International Court of Justice at the Hague, which is currently determining whether Russia’s involvement in the fighting, in the downing of Malaysian airliner MH17 and in arming the militants in Donbas are violations of the  International Convention for the Suppression of the Financing of Terrorism.  Such information should also help the International Criminal Court to determine that Russia’s role in the conflict in Donbas makes it an international armed conflict.

Since early August 2018, the SMM’s drones have observed at least seven convoys of trucks and other vehicles travelling by night on dirt roads near the border with the Russian Federation.  On two occasions the UAV was jammed after it had detected sophisticated weapons being transported.  On 10 October, the UAV was recalled in time due to jamming after it spotted a Ural truck mounted with an anti-aircraft-gun (ZU‑23, 23mm)) on a dirt road around 2 km from the border, as well as other movement.  In the early hours of 27 October, the UAV was first jammed and then brought down after it  reported movement of a Russian convoy of trucks and of a surface-to air missile system in non-government-controlled area (details here).

The SMM took part in negotiations between the Russian and Ukrainian parties of the Joint Centre for Control and Coordination (JCCC), including around the time of the battle over Debaltseve (in January-February 2015).  Hug was asked by the BBC reporter whether the statements from Russian military people at that time could also be seen as acknowledgement of Russia’s direct part in the conflict,

He responded by mentioning their observation of the JCCC’s work, and noted that they had asked for assurances from all sides that the mission’s monitors would be guaranteed safe access to Debaltseve.  The Ukrainian side provided such assurances, however the Russian general then at the JCCC, as well as the armed militants refused to guarantee their safety.

There is considerable evidence that Russian forces were directly involved in that battle, with the proof including a Russian state award “for services to the Fatherland” to a solder who took part in the battle, The fighting to capture Ukrainian government-controlled Debaltseve continued after Russian President Vladimir Putin agreed a ceasefire as part of the Minsk II Agreement on Feb 12, 2015, and investigative journalists have provided evidence suggesting that it was Putin himself who ordered the offensive against Debaltseve (details here).

Other obstructions which Hug describes also warrant attention. Both in the BBC interview, and when talking to Hromadske.ua, Hug stressed that the ability of the monitors to observe suspicious movements was necessarily restricted by the distances involved and the multiple checkpoints that the SMM teams needed to pass through to reach the 400 kilometre stretch of the state border which is currently not under Ukrainian government control.  They are not permitted to open offices closer to this border, making any spot checks effectively impossible.  The militants have always had ample warning that they are coming, though Hug also mentions that, particularly in the Luhansk oblast,  they have sometimes been told that they could go to the border, and then encountered restrictions on their access.

Hug has repeatedly stressed that the people the OSCE have spoken to clearly indicated “that this is not their conflict”.

Any restrictions on access to the border with the Russian Federation are clearly with Moscow’s full support and knowledge. It was Russia who significantly limited the scope of the one observer mission supposedly monitoring the border.  The OSCE Observer Mission at Russian Checkpoints Gukovo and [Russian] Donetsk has 20 civilian monitors, and a severely restricted mandate to notice only movement across these two official checkpoints.

Russia has repeatedly used the lack of evidence of Russian military movement through these checkpoints for propaganda purposes, claiming it to be ‘proof’ that there is no such military involvement (details here)

That Russia is directly transporting military hardware, and doubtless other equipment, and perhaps fighters, to occupied Ukraine has been demonstrated on at least seven occasions over the last three months.  The fact that  the movements are at  night on dirt roads in places where there are no official border crossings, as well as the jamming or downing of OSCE drones that had spotted transportation of military hardware makes it  quite clear just how ilethal  - and incriminating - these night convoys must be.