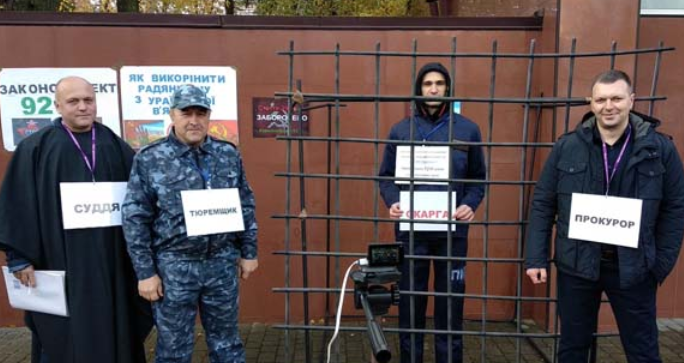 An extraordinary relict from Soviet times makes it possible for Ukrainian prisoners to have up to three years added to their prison sentence for the most trivial of misdemeanours. There is no excuse for Ukraine to be holding on to this repressive norm, particularly when almost all other former Soviet republics have abolished it, and yet the last attempt to push through a change failed.

A new draft bill, No. 9228, drawn up on the initiative of the Reanimation Program of Reforms and the Kharkiv Human Rights Group was tabled in the Verkhovna Rada on 19 October 2018.  2018.  The list of authors contains a number of prominent MPs from different parties, so hopefully it will get passed.

The Soviet-era norm in question is Article 391 of the Criminal Code which was first created back in 1983, and succeeded in surviving the collapse of the USSR.  Article 391 is entitled “Wilfully disobeying the demands of the prison administration’ and allows for an extra sentence of from 1-3 years to be imposed for what is termed persistently disobeying the legitimate demands of prison authorities, or any other form of resistance.  This is measured by whether a prisoner has, for example, been placed in a punishment cell or similar penalties more than once within the space of a year.

Unfortunately, there is huge scope for abuse both in imposing penalties on prisoners, and then in using these as an excuse for applying Article 391.

One prisoner got an extra year for having allegedly slept in the wrong place, while another had three years added for supposedly refusing to get up in the morning.

Former prisoners have asserted that the norm is used specifically against prisoners who complain about infringements of their rights.  In 2011, Volodymyr Bordun had an extra three years added to his sentence.  He alleges that this was because he had complained to UN monitors of torture by prison staff around 75 days before his sentence was due to end.

Around 100 prisoners have extra years added to their sentence under this norm each year, with a significant number suspected of being reprisals against prisoners who complain about conditions or treatment.

Civic groups also know of cases where the threat of a sentence being added is used as blackmail to extort money from a prisoner’s family.

Most attempts to appeal against such additional sentences fail, with the court simply looking at the fact that a person was placed in a punishment cell more than once, without considering why he or she received that punishment.

The fact that there is such a possibility for imposing criminal liability for something as trivial as not making your bed a couple of times provides a powerful form of pressure on prisoners.

The European Committee for the Prevention of Torture has called for Article 391 to be abolished in both the reports for 2017 and for 2018.

All of the above was explained to legislators back in July 2016, when a previous bill was put to the vote.  It failed mostly because of the number of MPs who did not take part in the voting or abstained, rather than because anybody came up with some kind of reason against passing it.

A number of civic groups have now appealed to legislators to pass the law.  They point out that likening a mere disciplinary misdemeanour to a criminal offence is unacceptable for Ukraine as a European state and does the country’s reputation a great deal of harm.  The ask that the law be passed by 10 December, and that until then the Justice Ministry ensures that any criminal prosecutions under Article 391 are suspended.

It is to be hoped that this time legislators will understand that there is nothing controversial about freeing Ukraine from Soviet repressive norms dating back to Yuri Andropov.