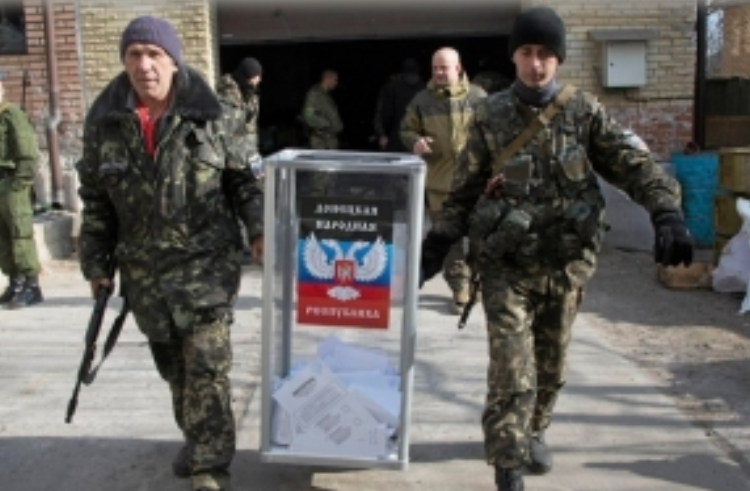 Russia and its proxy Donbas ‘republics’ are claiming that ‘elections’ scheduled for 11 November express the will of the people, and ignoring or even denying that they are in total breach of the Minsk Agreement.

Predetermined and without alternative candidates

Real voter turnout would be difficult to expect for false ‘elections’ where there is no alternative to the ‘winning candidate’ and no chance of being recognized by any democratic country.  Like in Soviet times and during the recent Russian presidential ‘elections’, the self-proclaimed and Kremlin-controlled ‘Donetsk and Luhansk people’s republics’ [DPR, LPR] are trying to both entice people to attend, and threaten them with dismissal or other bad consequences if they do not turn up on Sunday.  There have also been at least two arrests of critics of the event, and aspiring ‘candidates’ have been prevented from taking part.

Amid universal condemnation for this breach of the Minsk Agreement, and with such a farce having nothing in common with free and fair elections, the militants are finding their own, highly specific ‘international observers.

‘Will of the people’

There is no free press in the two ’republics’, and access to most Ukrainian media has long been blocked.  In such an information vacuum, the population are  being bombarded with propaganda about how these ‘elections’ will prove to the world that the ‘republics’ are recognized as ‘democratic states’.

The unequivocal condemnation from the OSCE, EU and USA and calls for them to be cancelled are either ignored or presented as proof of the West’s ‘double standards’.

Neither this imitation election, nor a similar stunt in early November 2014, could have taken place except on the direct instructions of Moscow.  In 2014, with real sanctions having finally been imposed after the downing of Malaysian airliner MH17, and with the ‘elections’ so clearly in breach of the Minsk Accord, Russia eventually stopped short of fully recognized their predetermined ‘result’.  It has been even more evasive this time, although the Russian media are uncritically reporting the ‘preparations’ and largely pushing the narrative that this is the ‘will of the Donbas people’.  They, and official Moscow, either avoid any mention of fact that the ‘elections’ are in direct breach of the Minsk Agreement, or prevaricate.

In reporting on the USA’s call on Russia to stop supporting these fake elections, the TASS news agency stated that “Luhansk, Donetsk and Moscow have repeatedly stated that the holding of elections does not clash with the Minsk Agreement which determines the procedure for holding only municipal elections”.

The relevant part of the document reads as follows:

“On the first day after the pull-out,  a dialogue is to start on modalities of conducting local elections in accordance with the Ukrainian legislation and the Law of Ukraine “On temporary Order of Local Self-Governance in Particular Districts of Donetsk and Luhansk Oblasts,” and also about the future of these districts based on the above mentioned law”.

There has been no pull-out, quite the contrary, and Russia has been caught twice bringing military hardware into Ukraine, and on at least seven occasions sending convoys via dirt roads at night. Nor has there been any dialogue.

Most importantly, Russia can talk about ‘Luhansk’ and ‘Donetsk’, as much as it likes. This will not make them legitimate ‘republics’ and the term ‘local elections’ quite evidently referred to any elections within these areas of Ukraine.

There are vast amounts about the ‘elections’ on the ‘republic’ websites, with a suspicious amount even published in English.  The so-called ‘central electoral commissions’ are, for obvious reasons, quite undemanding about what is required to be ‘a foreign (international) observer.  Almost nothing really, with a person only having to be “not living on the territory of DPR or LPR, and a representative of a foreign state, foreign or international organization”.  In principle, they need to produce some kind of document confirming their ‘representative’ status, bur since even Russia has said it’s not sending observers, that demand seems to also have been waived.

As mentioned, in at least the case of  Salekh Mosab from Palestine who claimed that ‘LPR’ could provide an example to Europe on how to prepare elections, even the requirement that he doesn’t live in the occupied territory has, seemingly, been ignored.

Another ‘observer’ – Al Khasheb Rashid Abdulkudos Ibragim, who has stated that the ‘LPR elections are the road to building the fundamental norms of democracy’ is a medical student from Yemen, studying in Russia’s Oryol.

Then there is a real-live American, George Eliason, whose suitability as an independent ‘observer’ can be assessed merely by the titles of his ‘Washington Blog’

Janus Putkonen from Finland is also being touted as an ‘observer’, although he is reported to have permanently moved to Donetsk in summer 2015, where he reportedly founded the so-called DONi-News media company  with Russian money.

There will also be Ronald Van Amerongen from the Netherlands, who also lives in the Luhansk oblast, where he engages actively in propaganda against Ukraine.

The ‘official’ DPR websites state that there will be around 50 ‘observers’ from 14 different countries, though do not go into any detail.

Ostro, however, identifies two ‘foreign observers’ as Christelle Neant, a French journalist, often photographed in camouflage gear and working for the DPR’s ‘DONi-News agency’ from where she ‘covers’, from a pro-militant, pro-Russian standpoint, events in eastern Ukraine.

There will also, apparently, be Pascal Hillebrand, a Dutchman who is fighting in Donbass against Ukraine.  According to media in DPR, he will not be the only such DPR fighter turned ‘international observer’, with Isaac Marques from Chile also expected to take part in praising these ‘democratic elections’.

It is worth noting that at least one foreigner, Briton Ben Stimson, who fought against Ukraine in Donbas is serving a five and a half year sentence on terrorism charges back home, and several other men have been arrested and are facing likely prison sentences in their countries for their part in killing Ukrainians on Ukrainian territory.

Other ‘observers’ will include Frenchman Maud d’Eme who can be heard here explaining why he chose DPR, and Okay Deprem from Turkey who is also permanently living in ‘DPR’.

Unless the better-known ‘observers’ have asked for anonymity, it would seem that Russia’s budget this time is far more modest than in November 2014, when the ‘observers’ included several members of European far-right parties,

For the moment, the bribes offered for turning up on Sunday are also modest, and reports that people are being forced to either appear on that day, or to give their ‘vote’ early, not on a mass scale.

It may simply be too early to assess, but certainly in November 2014, it was all much more lavish, with war-weary citizens openly enticed to the ‘poling stations’ by the possibility of buying sacks of potatoes, carrots and cabbages at cheap prices (see: An ’Election’ amid Kalashnikovs, cabbages and Moscow’s fascist fans)