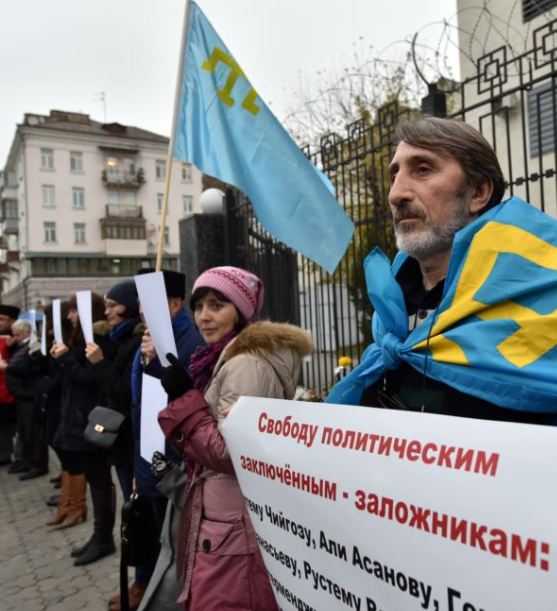 Ukraine’s  Ministry on Occupied Territory is trying to maintain secrecy over the allocation of money to Russia’s Ukrainian political prisoners and their families.  NGOs directly involved in helping such prisoners have reacted with indignation to attempts to exclude them from the proceedings and point out that secrecy where public funding is concerned is unacceptable and carries the risk of corruption.

Yusef Kurkchi, the Deputy Minister and Head of the commission on aid to political prisoners, announced at a press conference on 13 November that members of human rights NGOs would not be allowed to take part.  He claimed that this was because the issues in question have direct impact on the safety of the political prisoners and members of their families.  It may well be true, as Kurkchi said, that public officials are bound by documents obliging them to keep all information confidential.  It does not, however, follow that human rights groups, who have been helping victims of persecution since 2014, would not be aware of any dangers and could not be trusted because they have signed no such document.

It remains unclear whether the meetings of the commission will be open. At the last meeting on 7 November,  attempts were made to prevent Mykola Ivashchenko, a journalist from the Human Rights Information Centre from attending, and Kurkchi then said that the meetings would be behind closed doors.

The Crimean Human Rights Group was scathing in its assessment of this first session which, from a formal point of view, was not even able to take place due to the lack of a quorum after officials scheduled to attend did not turn up.  What followed was only a discussion, which concerned, among other things, the fact that Kurkchi had learned that a journalist was present and ordered Ivashchenko to leave, announcing that the meeting was to be behind closed doors.  At that point Kurkchi said only that he had the power to decide whether the session would be open or not.  Having not received any information as to the norm in legislation allowing the Deputy Minister to ban him from attending, Ivashchenko decided to stay put.  Kurkchi called the guards to remove him and threatened to draw up a document accusing the journalist of obstructing their work.  Ivashchenko in his turn called the police.  It seems that Ivashchenko did finally remain, though not because Kurkchi changed his stand.

During the later discussion, Kurkchi did mention the fact that the commission must not divulge information about recipients of aid.  He said that if the Russian occupation regime learn that a person has received some kind of aid from Ukraine, they will try to pin terrorism or extremism charges on them.  This, he asserted, constituted grounds for holding the commission sessions behind closed doors.

Representatives of civic organizations present were unimpressed by that argument.  Olha Skrypnyk from the Crimean Human Rights Group does not anticipate that political prisoners would have new charges brought because of the aid, though sees it as likely that the occupation regime will react in some way. She also warns that it is often the prison administration or criminal elements in prison who put pressure on prisoners who are receiving aid.  She is convinced that NGOs directly working with political prisoners must be involved and points out that they could held prepare strategy on confidentiality.  Even if parts of the commission sessions need to be held without the presence of journalists, the latter need to receive proper explanations as to why.

Oleksandra Dvoretska, Head of Vostok [East] SOS pointed out how long the Ministry had achieved nothing with respect to distributing aid, saying that it was only after 10 months that they had a commission with unclear powers, and with a not particularly clear list of documents and grounds enabling people to be able to approach them for assistance. Dvoretska added that the sessions were effectively secret, with no information about them on the website and no invitations issued to civic groups specifically involved in helping political prisoners. Information had appeared on the Ministry’s website asserting that aid had already been paid, however this was then deleted.

Vostok SOS believe that such secrecy carries the danger of corruption, and point out that information about public spending is, by law, open to the public

The Provisions do not make it clear how long applications will be considered, and what the procedure and number of those in agreement will be for reaching a decision.

Alyona Lunyova from the Human Rights Information Centre endorsed Dvoretska’s objections, noting also that Kurkchi’s demand for secrecy does not make sense.  He himself has already asserted that there are 70 recipients of aid and it is not as though Russia does not know which Ukrainians it is persecuting.  She believes that the Ministry is trying to keep civic organizations out to avoid their criticism and stresses that NGOs need to know whom 96.7 million UAH is being given to and on what criteria.

As reported, it was only in July 2018 that Ukraine’s Cabinet of Ministers finally passed a resolution which will help the families of Russia’s Ukrainian political prisoners pay for lawyers, as well as visits where the men are held somewhere in Russia.  Prime Minister Volodymyr Groisman announced on 26 July that the government had agreed to allocate 100 thousand UAH (around 3, 220 euros) to the families of political prisoners held in Russia or on occupied territory, with this, presumably, including hostages held prisoner in the Kremlin’s Donbas proxy ‘republics’.